A sharper-than-expected rise in official interest rates would end up costing tens of thousands of jobs, slow wages growth, crimp the investment plans of businesses and punch billion-dollar holes in precarious state budgets.

Analyses by the NSW, Victorian and West Australian treasuries of a sizeable increase in interest rates also highlight the dangers that would flow through to the federal budget including the interest bill on record levels of debt. 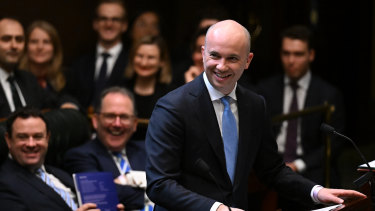 NSW Treasurer Matt Kean hands down the 2022-2023 NSW budget. The budget, and state economies, could be derailed by higher interest rates.Credit:Pool

The Reserve Bank board has lifted official interest rates at its past two meetings and is poised to increase them again when it meets on July 5.

That would take the cash rate to either 1.1 per cent or 1.35 per cent. Financial markets expect the bank to keep lifting rates, pricing in a cash rate of 3.5 per cent by year’s end and 4 per cent by mid-2023.

Lowe said on Tuesday such a high cash rate would have a major impact on the national economy but conceded financial markets had more accurately forecast the RBA’s movements in interest rates than the bank itself over recent months.

In this week’s NSW budget, the state Treasury examined what would happen to the economy if interest rates were a percentage point higher than its own estimates. It is expecting a cash rate of about 1.75 per cent by year’s end and 2.5 per cent by the end of 2023.

Wages growth would be slower while inflation in Sydney would be about a half percentage point lower.

“Overall, this means consumers will spend less and businesses will invest less, leading to a reduction in domestic economic activity and, consequently, lower employment,” it found.

EY chief economist Cherelle Murphy said all states were facing a difficult task trying to determine the actual path of interest rates and getting it wrong could cost billions of dollars.

“This year, state treasuries need to consider the impact of higher than expected interest rates. It’s one of many variables that can knock the budget off course,” she said.

Higher interest rates would not only slow the economy but also undermine the state budget. Borrowing costs on state debt are growing faster than had been expected as global markets price in much higher levels of inflation.

The Victorian Treasury estimates that if interest rates are one percentage point higher than assumed, its interest costs would be almost $300 million higher in 2022-23. By 2025-26, the state’s interest bill would be almost $1.2 billion more than forecast.

That would translate into state net debt being $2.1 billion higher in 2025-26 than forecast in the recent budget.

The West Australian Treasury also noted that if interest rates on state government debt was higher than expected, then there would be a cost to that state’s taxpayers.

It estimated the WA interest bill would be $169 million a year higher by 2025-26 if the average effective interest rate on state debt was 0.73 percentage points above expectations.

In NSW’s case, the budget would not return to surplus until 2025-26 while overall debt would be higher.