Simon Amstell was on a plane to Australia when vegan activists blockaded a busy Melbourne intersection last week. By the time he landed, the backlash was underway. Aggrieved commuters tweeted photos of "revenge steaks" they claimed to be eating, while Prime Minister Scott Morrison threatened tougher punishments – including jail – for the protesters.

"That aggression is coming from insecurity and panic," says Amstell, an English comic and former host of the BBC quiz program, Never Mind the Buzzcocks. "Anger is just a way of not being upset." 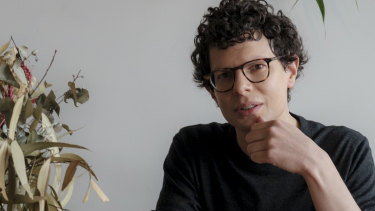 The result is Carnage, his 2017 mockumentary. Set in 2067, when veganism is the norm, it reflects on the now-taboo practice of meat eating. The film includes real footage of vegans' early marketing misfires, including a TV interview with the Bland family (their real name) who wear itchy-looking jumpers and drone on about vegan cheese.

There’s a growing acceptance that people who don’t eat animals or drink their personal liquids aren’t the crazy ones.

These efforts were no match for the high-wattage glamour of Britain's first celebrity chef, Fanny Cradock, or her successor, Nigella Lawson.

"What the documentary did is change where the joke is about vegans," Amstell says.

"There's a growing acceptance that people who don't eat animals or drink their personal liquids aren't the crazy ones. If we were in a field – and I was eating a carrot and you were sucking on the breasts of a goat – you’d be the maniac." 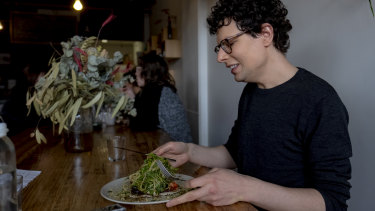 By now, the other diners at our communal table in Shoku Iku, a vegan restaurant in Melbourne's Northcote, have paused their conversation to eavesdrop.

"The idea of stealing milk from another species is quite peculiar," Amstell continues. "I think we must miss our mothers’ breasts."

We finish the last of our "protein pizzas": chia and flax bases topped with a satisfying mix of Mediterranean vegetables and walnut pesto.  The "boring cuisine" trope, I confess to Amstell, has served me well. If I can dismiss vegan food as unpalatable, I don't have to have examine the ethics of my meat and dairy consumption.

"Everyone’s on their own journey," he says.

"But we'd better hurry up. If we carry on eating animals, human existence won't be able to continue. It's the United Nations saying that, not me."

Like all of Amstell's work, his new stand-up show is deeply personal.

"When I started in comedy, I'd sit at home and write jokes in a pained, effortful way. But then I found that the truth is funnier. If I say something that isn't quite accurate, or if I haven't gotten to the horrible truth of a situation, people don't laugh."

He began telling audiences about his coming out (he kissed a Frenchman in Paris to "test" if he was gay, which confirmed his hunch), and how he treated his depression (therapy, a boyfriend, and the Peruvian drink called ayahuasca all helped).

"If I feel deeply ashamed about something, I'll force myself to say it on stage," he says.

"If I get laughter back, it's like the audience is saying, 'It's OK, we feel that as well.' And the fear – that I'll be rejected if I reveal who I am – is destroyed."

Simon Amstell’s What Is This? is on until April 21 at the Arts Centre. Tickets: comedyfestival.com.au