STEPHEN GLOVER: I haven’t lost my marbles — but just imagine if Boris rode to the rescue of Brexit…

One of the most significant political developments of recent weeks has been Boris Johnson’s dramatic loss of weight. A long time ago he told me he weighed 16 stone. He must have gone up before he started to come down.

Some will say that the new woman in his life, who is not much more than half his age, has put him on a tough regime so that he does not simply lie snoring at night like an old walrus.

But his willingness to obey Carrie Symonds’s exhortations may hint at a deeper consideration — that Boris wants to look sleeker, and more like a prime minister in waiting. 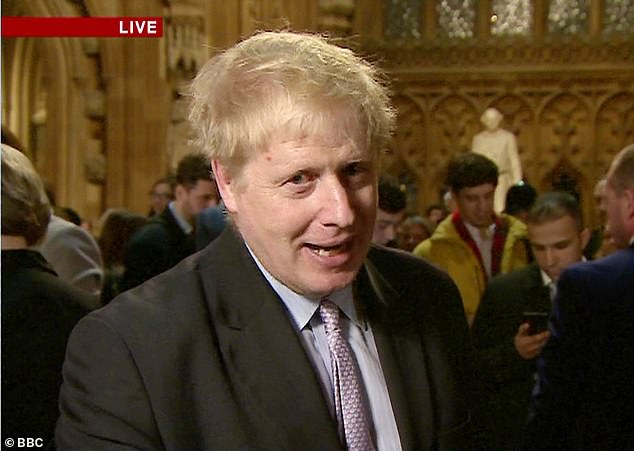 One of the most significant political developments of recent weeks has been Boris Johnson’s dramatic loss of weight. BBC viewers were whipped into a frenzy after observing former Foreign Secretary Boris Johnson’s ‘extraordinary’ weight loss and ‘youthful’ haircut following last night’s Brexit vote

Is it my imagination, or is he also more smartly turned out? Whereas a farmer will fatten up a prize pig for a county show, Boris is being deliberately thinned down, and a ribbon has, as it were, been attached to his tail.

You may say there is no vacancy at No 10 at the precise moment, and that is true. Even if Theresa May were to slip under a bus, the Tory Party faithful might plump for angular, dynamic Dominic Raab as their champion Brexiteer, rather than Boris.

Nevertheless, as someone who takes an intermittent interest in his career, I would like to give him some friendly advice, which I hope he will find constructive. I do not, though, offer it purely for his sake. 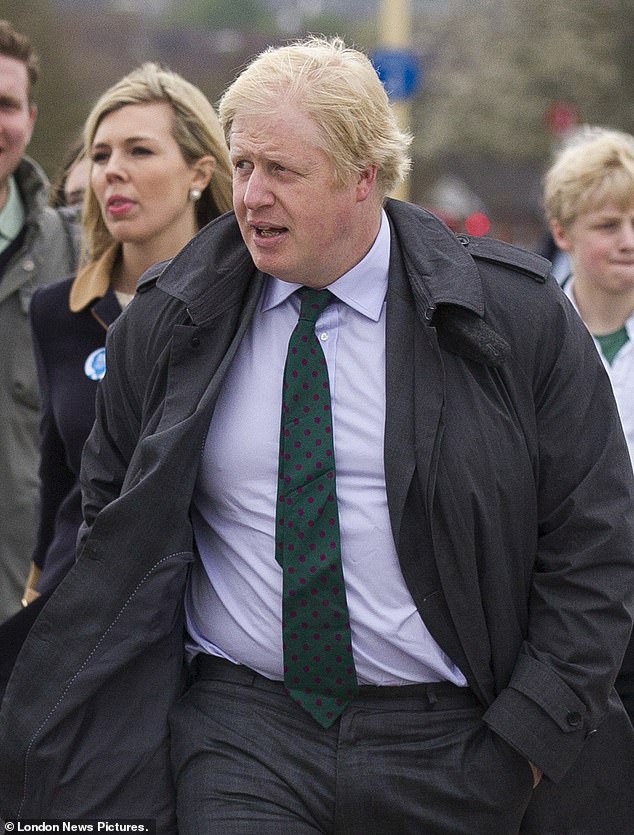 Writing in The Spectator, Boris (pictured with Carrie Symonds in 2012) recently revealed he had lost 12 lbs by quitting alcohol and ‘late-night binges of chorizo and cheese’

If Boris were to follow my recommendations, he might not merely fulfil the ambition he has nursed since about the age of two of leading this country. He could also provide us with an escape route out of this painful Brexit impasse, see off Jeremy Corbyn, and unite the fractured Tories. Please hear me out.

We may be pretty certain that Theresa May will spice up her deal a little after her devastating defeat on Tuesday night. She may get a concession from Brussels over the dreaded Irish backstop. She will come back to Parliament. She will probably be defeated again.

How long this process will last is anyone’s guess. But I think we may be fairly certain that while she is doing her utmost in her rather awe-inspiring way, a cross-party alliance of Remainer MPs will be cooking up their version of a soft Brexit under the fond eye of Mr Speaker Bercow.

And we can also be pretty sure that the recipe, when it emerges, will be close to what is called Norway Plus, which would keep us in the Single Market and Customs Union, and force us to accept free movement of people and make payments to the EU. A rule taker rather than a rule maker.

This is what Labour Remainers such as Stephen Kinnock and Chuka Umunna are brewing up, and what Tory Remainers such as Dominic Grieve, Anna Soubry and Nick Boles yearn for. It would please Vince Cable, the Lib Dem leader, too, though like most of these people he also hankers after a second referendum.

My point is a simple one. If Tory hard-Brexiteers continue to vote down Mrs May’s deal, they will in all likelihood end up with Norway Plus (less good than being in the EU, I’d say) or possibly a second referendum, which could reverse the result of the first one. 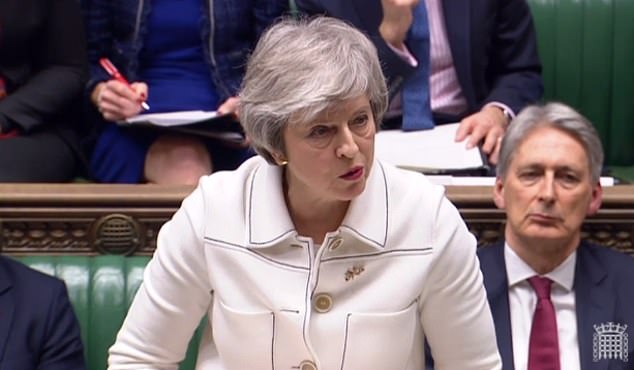 ‘This is my dream. Mrs May returns to the Commons with her deal for the second or third time. This brave, doomed woman seems to be staring defeat in the face. And then Boris extends a hand to her. I will take over your deal, he might say, and make it work for the country I love’

Indeed, I agree with Michael Gove, who was of course the man who deserted Boris Johnson in June 2016, and destroyed his chances then of entering No 10. After Tuesday’s rout, he had some hard words for Jacob Rees-Mogg’s rigid Brexiteers, which were deserved.

Mr Gove said: ‘The truth is the European Research Group have voted themselves for a softer Brexit. There is now a risk of no Brexit happening and there is a greater chance of a much softer Brexit.’

Why do the hard-line Brexiteers refuse to entertain Mrs May’s deal? Partly because they are principled people and ideological purists who can no more compromise their faith than an early Christian martyr could repudiate his religion in order to blunt the torturer’s zeal.

And also because they believe that if they go on voting down Mrs May, we will soon find that March 29 has arrived, when as the law stands we have to leave the EU.

But I believe they are wrong to think that No Deal will happen by default. A Parliament dominated by Remainers is never going to permit it, especially if Speaker Bercow is finagling parliamentary rules to their advantage.

One way or another, I believe Mr Gove is right, and we are heading for an outcome which will be far less agreeable to Mr Rees-Mogg and his chums (and to me, as it happens) than the deal they cheerfully voted down on Tuesday night.

Unless, that is, Boris Johnson should come to the rescue.

Boris, unlike Mr Rees-Mogg, was not born a Brexiteer. Before deciding to join the Leave campaign, he famously wrote down the pros and cons on two sides of paper. I do not reproach him for this. It bespeaks an agile and a fluid mind.

He is an internationalist, a lover of Europe, a speaker of French — about as far from the Remainers’ stock caricature of Brexiteers as bigoted Little Englanders as it is possible to be.

Ah, some will say, he has made his bed and now he must lie in it (in more ways than one, perhaps). Maybe. But Boris knows that great statesmen change their minds. Indeed, they are often defined by doing so. 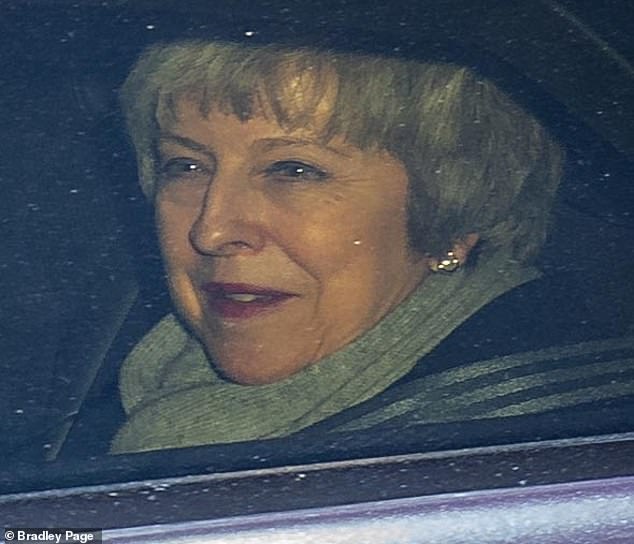 Boris will also know that when that magnificent Frenchman Charles De Gaulle returned to power as prime minister in 1958, he gave the extremist French settlers in the colony of Algeria reason to believe he was on their side. But he gradually withdrew France from Algeria because he understood it was the only way. I do not, in fact, ask Boris to contemplate changing his mind, only to soften his uncharacteristically intransigent attitudes, which flourish in the hot-house and unnatural conditions of his newspaper column.

Only Boris Johnson can save Brexit now. Some Brexiteers would hate him for compromising but hatred is the inevitable price of political greatness, and in any case plenty of Remainers already loathe him.

This is my dream. Mrs May returns to the Commons with her deal for the second or third time. This brave, doomed woman seems to be staring defeat in the face. And then Boris extends a hand to her. I will take over your deal, he might say, and make it work for the country I love.

Fanciful? Perhaps. But I imagine him uniting our divided nation and healing our wounds. I see him bringing together the warring factions of the Tory Party. He could even combine again with his erstwhile assassin, Michael Gove. Boris’s vision and Govey’s brain.

I know he is monumentally ambitious, but which great statesman was not? Churchill certainly was. Boris may be poor on detail but he has a sense of destiny for himself and his country. Even after his diet, he is a big man in a land of pygmies.

Why couldn’t this happen? Tell me. And tell me, if you think I have lost my senses, of a better way of getting out of the mess we’re in. To be absolutely serious for a moment, there are none.