Catch that unicorn! Stephen Merchant’s on the trail of a must-have toy before it sells out in road trip comedy Click & Collect

Stephen Merchant has been on quite a journey since he found fame with The Office, which he wrote, directed and starred in with Ricky Gervais in 2001.

Worldwide stardom from that, followed by Extras and his HBO show Hello Ladies, and even a part in superhero movie Logan, may not have ironed the Bristolian burr out of him, but he now lives in a £2.5 million Hollywood mansion formerly owned by Ellen DeGeneres. 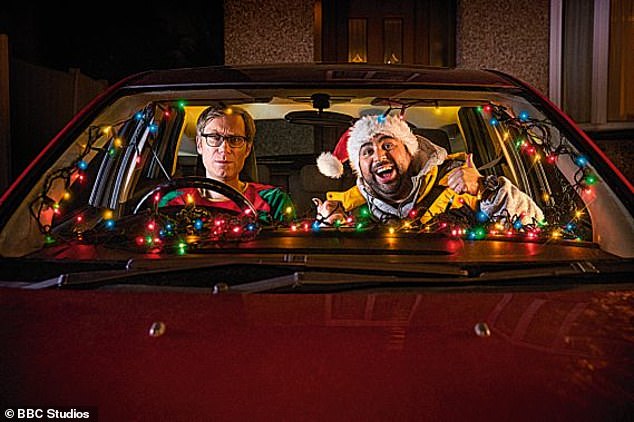 Stephen Merchant, 44, (pictured left with Asim Chaudhry) stars as a father who takes a road trip on Christmas eve to get his daughter’s present in new comedy Click & Collect

Stephen plays a father who cancels an order for his six-year-old daughter’s Christmas present when the shop puts the price up, then finds he has to drive from London to Carlisle to get another Sparklehoof the Unicorn Princess.

‘Asim plays my annoying neighbour who tries to help,’ says Stephen, 44. ‘His wife has left him and he wants some company.

‘He tracks the last toy down and buys it on his card, but it’s in a toy shop in Carlisle so we go on a road trip on Christmas Eve.’

To make things worse, Stephen ends up in an elf outfit when his clothes get wet.

In reality Stephen, who’s been dating American actress Mircea Monroe for a year, would never leave his Christmas shopping until the last minute.

‘I do it all well ahead to reduce stress,’ he says.

‘Even writing Christmas cards is stressful. People assume I’ll write something funny so there’s the pressure of being found out for not being funny.

‘But at least I don’t have to worry about the sales now.

‘For years I used to walk up and down Oxford Street to get £3 off a scarf I had my eye on. Now I have people to do that.’ 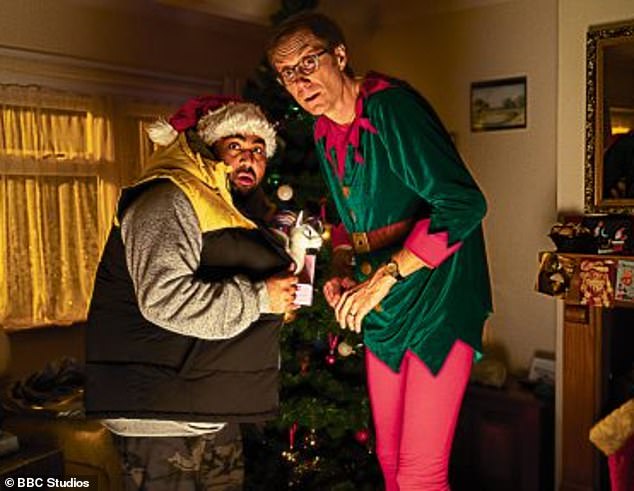 He laughs but he may not be joking.

While he insists the rumours that he’s worth £40 million aren’t true, he needn’t worry about discounted scarves any more.

Next up in March is a new film he’s made, Fighting With My Family, about a British wrestling clan, but all these new projects mean it’s unlikely he’ll work with Gervais again.

‘While I’m in LA he’s in London or New York. He doesn’t ever really come to LA.

‘I’d love to do something again but lately we’ve been dancing to our own tunes.

‘Our work had a specific tone but the things I’m interested in now aren’t compatible with that.

‘The wrestling film has a very different tone, and I quite like the challenge of doing it alone.’