A businessman has revealed how he combines a gruelling work schedule as founder of a tech company with life as a single father to six children.

Umesh Perera, 50, from Bushey, Hertfordshire, is founder of Ayozat, a broadcasting, production and distribution company with its own online streaming and gaming platforms.

But between building the business and making calls to his teams in Singapore, India and Europe, Umesh also finds time to cook family meals and do the school run twice a day. 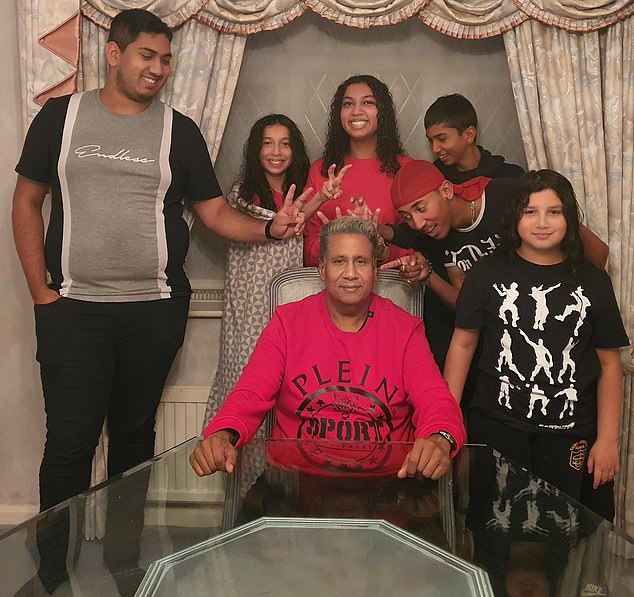 Umesh Perera, 50, from Bushey, Hertfordshire, is founder of Ayozat, a broadcasting, production and distribution company with its own online streaming and gaming platforms. But between building the business and making calls to his teams in Singapore, India and Europe, Umesh also finds time to cook family meals and do the school run twice a day

‘I won custody of my children in the family courts,’ Umesh said. ‘Their mum passed away not long afterwards which was tough for them but we’ve come through it all together. I loved my work but I left it behind at that point to raise my children.’

He’d already had a distinguished career by this point: in the aftermath of the Kosovo war he was part of the effort to repatriate more than a million refugees, collaborating with the Bill and Melinda Gates Foundation, Microsoft and the United Nations.

And his expertise was subsequently called upon by NATO and the Ministry of Defence to deal with other refugee crises.

But for most of the last two decades he put his career in second place to bringing up the kids.

When lockdown hit, Umesh founded his company Ayozat, which he runs from a home office in his family’s extended Edwardian cottage. 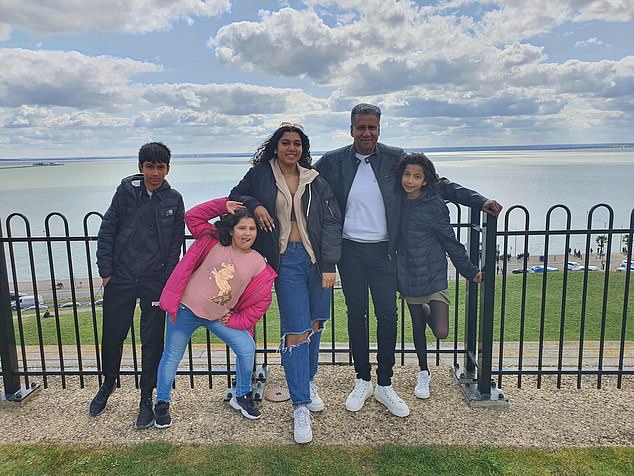 Umesh’s daily schedule makes for exhausting reading – tailored as it is around the needs of both his kids and his staff in different time zones.

Umesh rises at 5am to start to plough through a bulging inbox of emails. By 6am he is starting his daily conference call with teams in India and Singapore who are well into their working day and at their desks.

His employees are well-drilled, they know reports must be completed by 8am so Umesh can read them before jumping in his car with his three school aged kids to do school runs to three different schools around the Harrow area.

He’s back at his desk by 9am, ready to tackle his demanding work day head-on, with their European offices now on stream for liaison.

When 1pm arrives he stops the company clock and goes to the kitchen to knock up one of his famous Sri Lankan curries which he will share with whoever is around.

Umesh’s older children – Alex, Yazmine and Oliver – all often work for their father on various Ayozat projects so are often at home during the working day to keep him company. And to eat with him. Alex is involved full time with students Yazmine and Oliver getting involved when student life allows.

‘My family loves it when I cook and I’m a firm believer in gathering together to break bread and share those special moments around gorgeous food. I’m self-taught in the kitchen but the reviews I get are decent… Although perhaps my kids are biased!’ 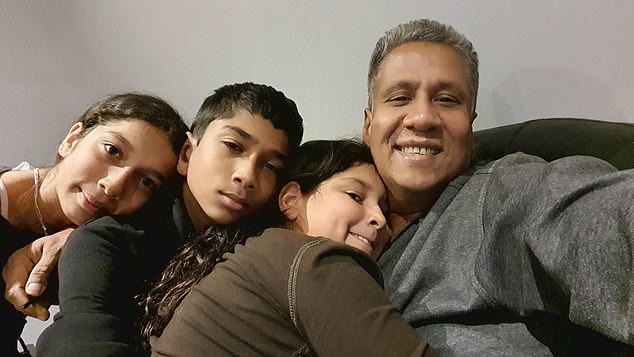 Umesh and his older children will return to their desks to continue work through the afternoon – with colleagues in north and south America now coming into their working days as their Asian counterparts are well into their evenings.

At 3pm it’s time for the second school run of the day. Collecting Zane, Amali and Tassia.

When they get home from school their favourite tasks are to test out whatever new software or applications their dad has been working on that day. ‘I tell them that homework comes first, then they are allowed to do the fun things later.’

He himself carries on the working day until well into the early evening before again cooking a meal for the whole family and unwinding before it all starts again early the next day.

Umesh admits that balancing the needs and demands of six children while running an international company is not easy.

‘There have been very challenging periods,’ he says. ‘I have to be their dad, share unconditional love, affection and support, while also showing them the value of hard work. When they have not put in the best effort I address that, realising that the long term gains outweigh the short term headache of being an occasionally-strict dad,

‘But while discipline is important they know I’m a softy at heart, I just try my best to get the balance right. Like every parent I make lots of mistakes along the way and every day is a humble learning experience.’

Umesh’s son, Alex, is now Ayozat’s head of network operations so his father is also his boss.

‘He is not a normal dad and is involved in all aspects of our lives,’ Alex said. ‘That includes the household – he even brushes the girls hair in the morning.

‘For him, it’s not about a separation between work and life, it’s about ‘life’ – about trying to do the right thing.

He added: ‘The company’s focus on media and gaming was initially based on the interests of us kids and he regularly consults us on business decisions and products.’

Umesh harnessed his years of computer network-building skills and set about building a platform that he felt could rival the world’s tech giants.

‘It seems crazy when I say it now but I just somehow knew that this was destined to be huge, he said.

‘Now, with multi-million pound deals and our own Sky channel slot, it’s easier for people to understand the potential, we reach thirty million monthly viewers, but there was never any doubt in my mind that everything was about to change.’