For only the second time in its 49-year history the Biennale of Sydney will be curated by two artistic directors.

Cosmin Costinas and Inti Guerrero have been named as co-curators of the 24th biennale, which will be staged in 2024. Over the past 10 years the pair, who are both now based in Berlin, have worked together on several exhibitions. 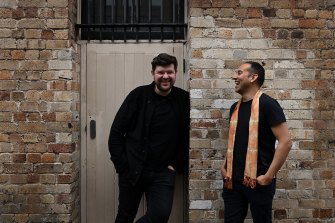 The latest directors of the Biennale of Sydney: Cosmin Costinas (left) and Inti Guerrero.Credit:Kate Geraghty

Biennale chief executive Barbara Moore said she was “thrilled” to have secured Costinas and Guerrero for the next biennale.

“[They are] highly respected curators, both together and independently, with a deep understanding of the international [and] Australian landscapes,” she said.

Guerrero described their style of collaboration as “organic”.

“There is a shared interest in understanding the idiosyncrasies of a place, the histories of a place, wherever we get the chance to curate,” he said. “We try to understand as much as possible the complexities and the layers of each place. That definitely helps to find common ground.”

And while they are both great friends and enjoy the process of working together, there is still plenty of room for artistic disagreement.

“If you don’t argue with somebody it means you don’t respect that person,” Guerrero said. “You should involve yourself emotionally and intellectually.”

Initially, the pair will spend time travelling around Australia meeting as many artists and non artists as possible as they formulate their ideas for the festival.

Both said it was too early to reveal even broad themes for 2024 but they were excited at the prospect of sparking discussion and fresh ideas.

“I think it’s too early for us to say what we hope to achieve here,” Guerrero said. “But I think, in general, what contemporary art, in a platform like this, can hope to be doing is to bring together conversations and individuals. Everything else from academia to cinema, to media has different, narrower sort of like paths for entry, whereas contemporary art has somehow set itself up as a place where different positions can be brought together; it can then facilitate, create vocabularies and images of imagining things differently.