One-off tax cuts will be delivered to 10 million working Australians in the May budget in a bid to boost the economy amid signs the number of long-term unemployed is rapidly climbing despite the nation’s rebound from the coronavirus recession.

Treasurer Josh Frydenberg is expected to confirm in the May 11 budget that the low and middle income tax offset will be extended for another year at a cost of $7.2 billion. 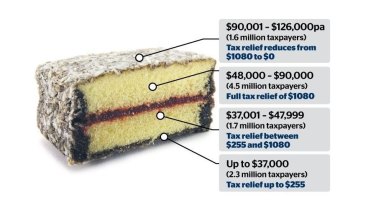 The government’s Low and Middle Income Tax Offset (LMITO) was the first part of its tax cuts, then kept for the 2020-21 financial year. Josh Frydenberg is expected to extend it again in the May 11 budget.Credit:

The LMITO, otherwise known as the “lamington”, was introduced by the federal government in 2018-19 as part one of a three-stage tax cut plan. It was going to be axed when stage two began but kept last year in the midst of the pandemic recession.

The end of the LMITO this year would result in people earning less than $126,000 a year facing a tax increase of up to $1080 from next financial year.

The tax increase threatened to deliver a $5.5 billion hit to the economy in 2021-22, according to research by KPMG, due to a reduction in the spending power of millions of people.

Campaigning in Perth, Mr Frydenberg would not be drawn on the offset but argued the government was committed to keeping a lid on taxes.

“The Coalition is always the party of lower taxes. That’s our record. And that will continue to be the
message and the policies we deliver going forward,” he said.

The offset will be for just one more year. Once it ends, the tax burden on low and middle income earners will again increase with Australian women facing the largest hit. Between 2022-23 and 2024-25, the average tax paid by female workers will increase by $1004 compared to $770 for the average man.

It will also only delay by a year a lift in the effective marginal tax rate for workers who earn $40,000 a year or around the minimum wage.

The cost of the tax offset extension will have to be borrowed by the government, which already has public debt at a record $836.7 billion.

The budget deficit, forecast to be $197.7 billion this year, is expected to be closer to $150 billion due to soaring iron ore prices.

The budget’s position is also better than expected due to much lower than feared unemployment. The jobless rate in the mid-year update was expected to reach 7.25 per cent but in March it had fallen to 5.6 per cent.

But data from the Australian Bureau of Statistics released on Thursday shows long-term unemployment has reached a 26-year high with more than 244,000 people out of work for at least 12 months.

The number of long-term unemployed has increased by almost 39 per cent over the past year with the number of men out of work for more than a year up by 44 per cent.

ANZ senior economist Catherine Birch said as there was a large increase in the number of people out of work in April last year, some of those would still be without work a year on.

“How quickly these people get back into work is the real issue. If you’ve been unemployed for a short period of time then it’s more likely that you find work. The longer you’re out of work the harder it is to get back into the workforce,” she said.

“I think we need to deal with the years of flat wages that we’ve seen under this government. One of the things the pandemic has demonstrably made clear to people is what happens to people who have insecure work,” she said.