A teenager has given birth to a premature baby that is believed to be the smallest baby in 20 years.

Ellie Paton, 17, gave birth to baby Hannah at just 25 weeks after having an emergency C-section.

Hannah weighed just 325g (11oz) at birth and was only given a 20% chance of surviving, with Ellie and her parents being warned that she might not make it through the night.

Luckily, baby Hannah was strong enough to breathe by herself and is now thought to be the smallest baby to survive after birth in the UK in the past two decades.

Ellie and her partner Brandon Stibbles, 21, were originally warned at her 22-week scan that their baby was too small – Hannah was the size of a 16-week foetus.

Ellie was also diagnosed with pre-eclampsia, and was rushed to Crosshouse Hospital in Kilmarnock, Ayrshire, on December 29 after she woke up with excruciating stomach and chest pains. 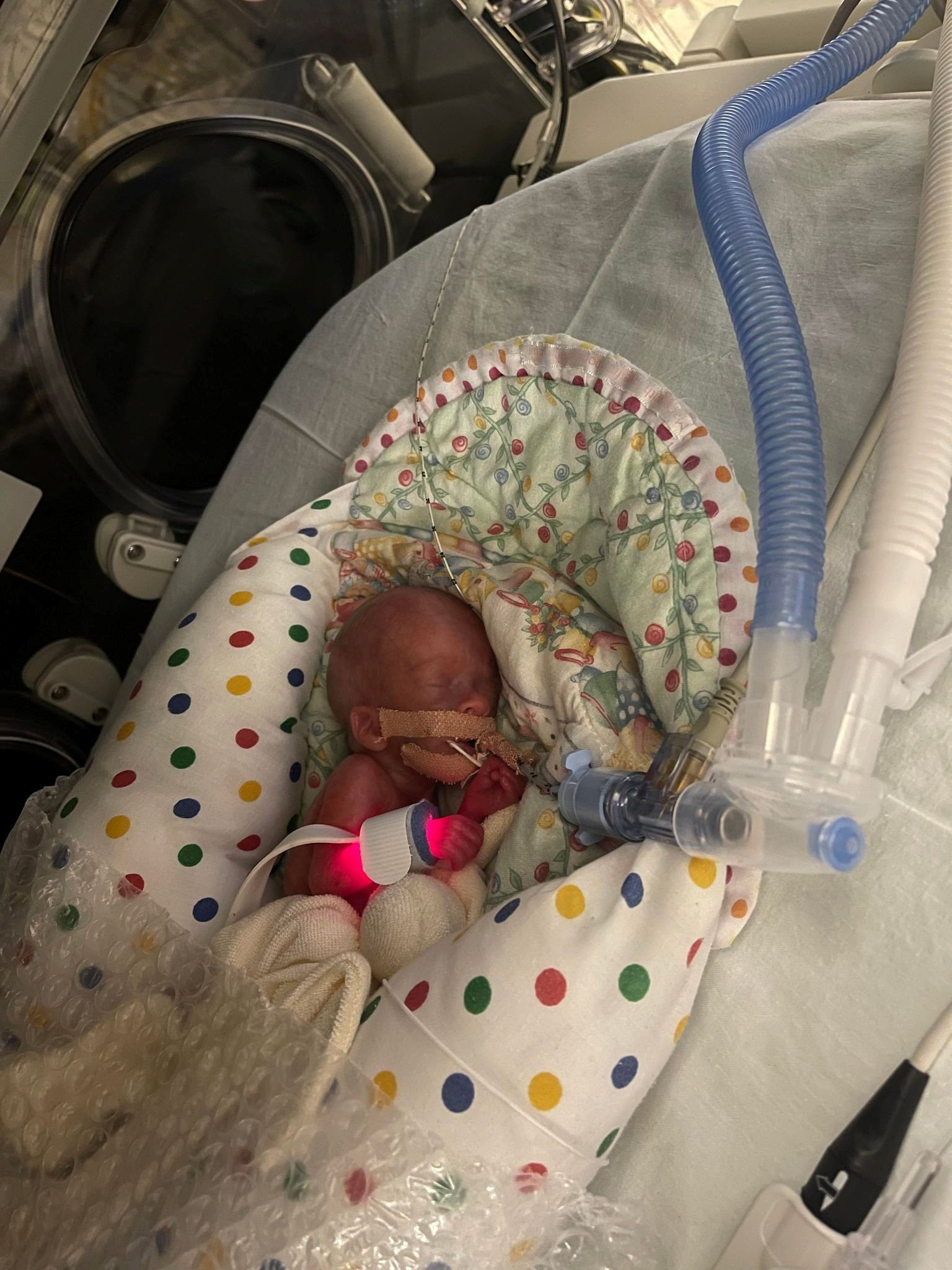 They were then transported to Queen Elizabeth University Hospital in Glasgow, where Hannah was born just after 1am on December 30.

She has remained in the hospital since then. Ellie has only held her baby once while father Brandon was able to change her diaper.

The baby is being wrapped in bubble wrap to keep her warm as this is lighter than a blanket.

Both Ellie and Brandon said Hannah is ‘the best thing to ever happen’ to them. They can’t wait to take her home but they may not be able to until Hannah’s original due date of April 13.

When Hannah weighs over 500g, she will be moved to Crosshouse Hospital. She has already gained 25g since birth but it might be another two months before she tips the scales.

Ellie said: ‘It was just scary all the time.

‘I had gone in just for a scan and ended up with high blood pressure, they sent me to the QEUH and I was there for two days while my blood pressure sorted itself out.

‘I went home and thought everything was OK, the next morning I woke up with excruciating pain in my chest and stomach and had to go in the next day.

‘They said I was going to be having a C-section but there was no plan, it could happen at any time.’

The new parents, who have been together for 18 months, are waiting until the moment they can finally hold baby Hannah.

‘We are allowed to put our hands in the incubator, I have held her once – she sleeps on a thing called the nest,’ said Ellie. ‘When the nurse changed it I got to hold her up. It will be pretty soon we’re able to hold her.’

Brandon added: ‘We are loving it. It’s the best thing that’s ever happened to us.

‘Ellie got to hold her and I got to change her nappy – when I took my hand away from changing her nappy, she grabbed it.

‘We were told she had a 20% chance of survival, that she could need resuscitating, or be stillborn but when she came out she was breathing, she’s practically breathing on her own.’

The smallest baby born in the UK before Hannah was Aaliyah Hart in 2003, who weighed 12oz.

Ellie’s mum, Stacey Miller, has been a huge support to the couple since the birth, having been through her own premature birth last year.

Brandon said: ‘Ellie’s mum went through the exact same thing. It’s not been easy but we’ve got a really strong support system, Ellie’s family have been an amazing support.’

Though doctors told Ellie and Brandon that babies that small don’t survive, Brandon is pleased that his daughter has ‘excelled’ after being born.

‘We are hoping things stay the way she is, putting on weight and feeding well,’ he added. ‘We are both just really eager to be back in our own environment.’

And despite the harrowing story of their child’s birth, the couple says they wouldn’t have done anything differently: ‘Our whole life has just changed.’

They also praised the medics at QEUH, saying that they have been ‘absolutely brilliant’ and a massive help to Ellie and Hannah.