Everyone hopes we’re finally done with lockdown, but Ten will have its fingers crossed tighter than most: three of its big shows for 2022 depend on people being able to move freely within cities, between states or out of the country.

At the network’s upfront presentation on Wednesday, joint heads of ViacomCBS ANZ Beverley McGarvey and Jarrod Villani unveiled a slate that includes new shows Hunted and The Bridge, and a return of The Amazing Race Australia. 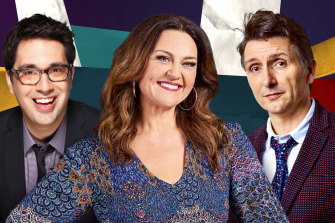 Chris Taylor, Chrissie Swan and Frank Wood will star in Ten’s local version of the hit UK panel show Would I Lie To You?Credit:Ten

Hunted, based on a UK format that first aired in 2015, sets ordinary citizens the task of evading capture by a “crack team of expert hunters” including former police officers, with little more than the clothes on their back and the kindness of strangers (and friends and relatives) to help them.

It will be shot in Melbourne, assuming it can leave its unwanted tag as the world’s most locked-down city behind it.

“We would have made it earlier but we really needed to be able to film it in a bustling city,” said McGarvey. “And we think seeing a bustling city will be something our viewers will be very excited about next year.”

The Amazing Race will also see regular people on the run – but only if our international borders are porous enough to allow it.

“We really want to make the Amazing Race again, but we won’t film it in Australia again, we’ve done that,” said McGarvey. Noting that the US version is currently in production internationally, she added, “it is our strong ambition to film it outside Australia next year and our feeling is we will be able to do it”. 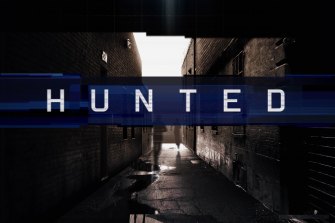 The UK format Hunted is coming to Ten in 2022.Credit:Ten

New to the broadcaster, but debuting on its streaming platform Paramount Plus rather than on free-to-air, is The Bridge. Based on an HBO Max format, it is another adventure competition reality show combining elements of Survivor and The Island with Bear Grylls, with 12 people abandoned in the wilderness and forced to work together to build a 300-metre-long bridge in just 20 days. They must work as a team to complete the task, but only one of them gets to walk across the bridge to collect the $250,000 prize – and to decide whether to keep it for themselves or share it.

“It is as simple as, ‘here’s a group of people, there’s an island, there’s a giant bucket of cash – get it’,” says McGarvey. She hails the show’s Tasmanian location as “beautiful and slightly untapped” but believes it’s “the human element, the social game” that will make it most interesting.

Five Bedrooms will get a third season on the SVOD service, but no new Australian dramas have been announced for free-to-air TV. MasterChef will see the return of its first champion, Julie Goodwin, in a Foodies vs Favourites iteration, while Ten’s line-up of comedy panel shows gets a boost with a local version of the popular British format Would I Lie to You?

Chrissie Swan will host, with The Chaser’s Chris Taylor and Frank Wood (of Lano and Woodley) as team captains. They’ll have their work cut out to match the combined wit and smarts of Rob Brydon, David Mitchell and Lee Mack on the BBC One original, but McGarvey is confident.

“Comedy panel shows go really well for us, but you really need to get the chemistry right,” she said. “We looked at it every two or three years and were never quite able to nail the talent but we think we’ve cast a really great panel.”