Randy Feltface, comedian, existentialist, unblinking purple puppet made of felt, is driving to friend and colleague Sammy J’s house in a small van.

“It’s got a lot of room in the back to stretch out, go camping, because I’m no fixed address at the moment,” he says. “If I’m in town I want something that I can sleep in.”

How long is he?

“That’s a bit of a personal question isn’t it?” he says.

Questions, particularly self-interrogation, have been driving Randy for the past seven years, part of a personal mission triggered by disconnection with himself and the world and a deep sense of discontent.

“This isn’t a particularly funny interview so far, is it,” he says. “Sorry.”

His latest show – a self-titled work playing at the Just For Laughs festival at the Sydney Opera House, before touring to London, Amsterdam, Los Angeles and back to Australia – investigates identity, the importance of people continually evolving and the dangers of becoming too comfortable with your opinions. 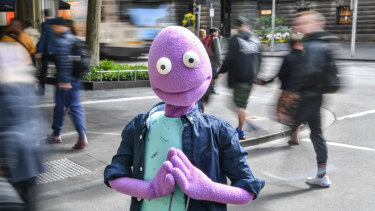 “Being involved in that shift, that’s happening globally, is a really exciting thing to be able to observe and report back on. And from a place of compassion and curiosity rather than judgment and negativity. Because it’s very easy to say, ‘Everything’s f—ed’, you know?”

Questioning self has always driven Randy’s shows, from Randy’s Postcards from Purgatory (self-loathing, ill-fated love) to Randy is Sober (abstinence, vegetarianism, religion) and Randy Writes A Novel (veganism, artistic perfectionism, buying a bookcase off Gumtree) – the latter being nominated for best comedy at the Edinburgh Fringe Festival and running at London’s Soho Theatre, the Montreal Just For Laughs festival and New York’s Clurman Theatre.

This year he also made it to the second round in NBC’s reality TV show Bring the Funny, in which panellists Kenan Thompson, from Saturday Night Live, called him a “master” and Chrissy Teigen admitted she had forgotten he was a puppet.

Randy has arrived at Sammy J’s house and, concerned he is being overly serious, hands the phone to the skinny blonde man he separated from artistically in 2015 after eight years creating stage and TV comedy together.

“The man who has walked in my door, he’s not the man that I met,” Sammy J says. “I see before me a grown man, an improved man. He remains purple, he looks a bit muted, a bit of an alien-type arrangement. But overwhelmingly I see an improved Randy before me. And I say that only because he owes me money and I need to flatter him.”

Randy takes the phone back.

“That is how you do an interview,” he says. “I gave you all the serious shit and he made it funny. The bottom line is it’s a genuinely funny and glorious and challenging show for me to do. If you wanna see me bounce around and spin frivolous shit about nothing, then go and see something else. I’m going to get into it on this show. It’s a bit of a meatier one.”

Randy Feltface is at the Sydney Opera House on November 3.