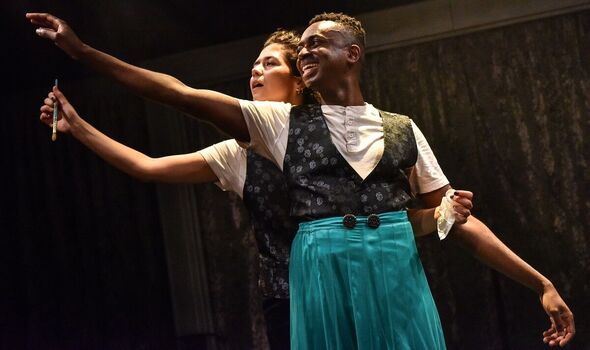 Houdin was a 19th century French magician (Harry Houdini pinched his stage name) while Méliès was the man who developed moving pictures into fantasy cinema.

Six performers appear as miscellaneous characters throughout, led by The Watchmaker (Martin Hyder) who acts as a kind of cabaret MC as well as narrator, romping through the history of illusionists and charlatans while performing a handful of basic conjuring tricks.

Two plots struggle to emerge, intended to illustrate the differences between fate, coincidence and deliberate misdirection.

In 1984, a young man (Brian Martin) returns a bag he has stolen to its owner (Bettrys Jones), unaware he’s been ‘played’, while a Parisian cellar becomes the focus of two significant eras of illusion, 1844 and 1888.

Wittily translated from the French by Waleed Akhtar, the play is a carousel of ideas that ultimately spins off its axis.

But Tom Jackson Greaves works wonders on a stage consisting of little more than a long velvet curtain and a small raised podium as the cast of six change clothes, accents, ages, genders and eras with dizzying and (almost) seamless ease, recalcitrant props notwithstanding.