A royal expert has suggested that The Crown’s upcoming fifth series may be so controversial  that it could prompt the Palace to break its ‘never complain, never explain’ tradition.

Rebecca English – who has seen the transcripts for the next ten episodes of the Netflix hit’s latest installment – slammed scenes as ‘verging on defamatory’.

The Daily Mail’s Royal Editor admitted parts of the show feel ‘pretty distasteful’ and said that while she initially felt that the reaction around the next season was ‘a bit of a storm in a teacup’, she was ‘shocked’ by its contents.

Speaking on Palace Confidential, she hinted that the Palace will wait for the release on November 9 before considering ‘fueling the flames’. 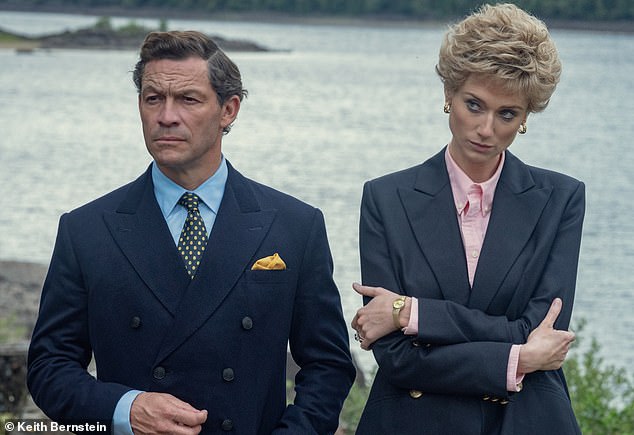 For the upcoming fifth and the final sixth series, Elizabeth Debicki (pictured with Dominic West as Charles) is taking over the role of Princess Diana 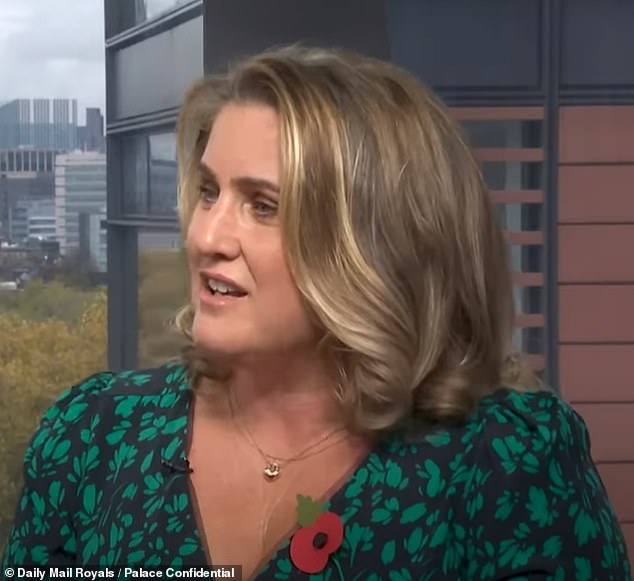 ‘I think they want to see it for themselves,’ Rebecca told host Jo Elvin.

However, she added: ‘I think it might be one of those occasions where they’re pushed to say something.’

The royal expert also revealed that it takes a deep dive into Princess Diana’s infamous Panorama interview with Martin Bashir, despite the Prince of Wales previously asking media outlets never to air again.

Describing the BBC interview as ‘unethical’, he claimed it triggered the events that caused his mother to lose her life two years later. Despite fans of the show initially thinking just a few seconds of the interview would be depicted, it has now been reported that it will instead be shortened to a four-minute and 23-second segment.

Rebecca said that Netflix has put it ‘over two episodes’ and even included terse scenes which see Diana skidding in her car and thinking that ‘maybe her breaks have failed’. 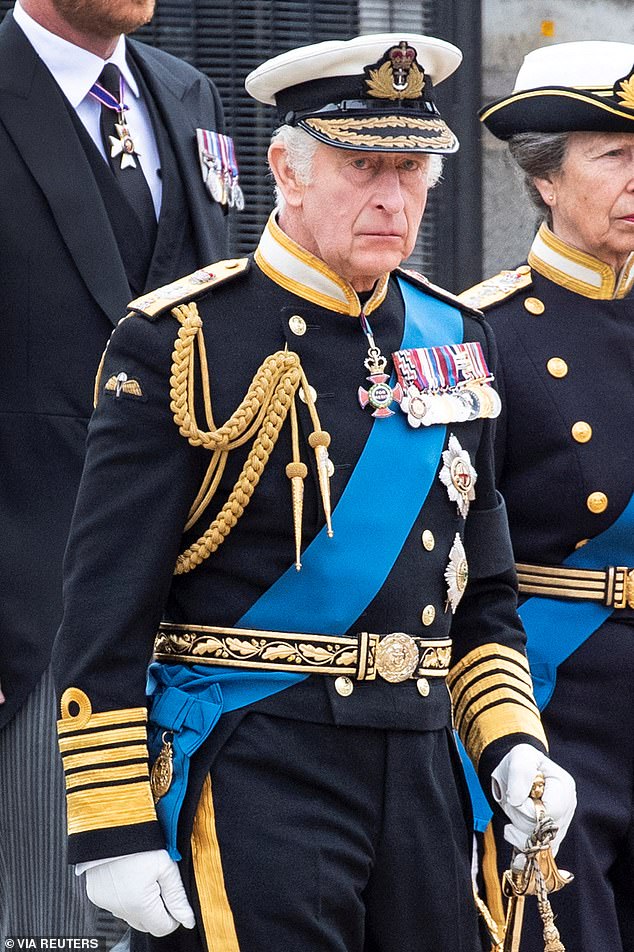 Speaking on Palace Confidential, she hinted that the Palace will wait for the release on November 9 before considering ‘fueling the flames’ 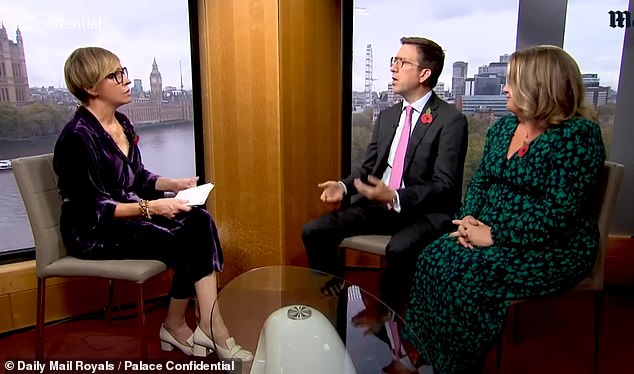 The expert also hit out at the depiction of the infamous recorded private conversation between King Charles and the Queen Consort in 1989.

The call between then-Prince Charles and Camilla, which has been widely referred to as ‘tampongate’, was taped by an amateur radio enthusiast who claimed to have stumbled across the pair’s conversation while moving between audio channels.

During the call, the then prince referred to being reincarnated as the tampon brand tampax, and told Camilla that he wanted to ‘live inside’ her. 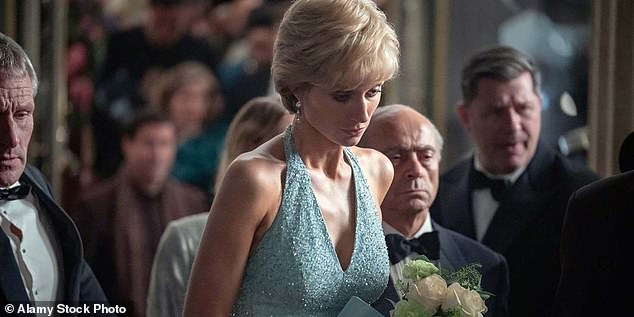 The fifth series will document the events leading up to Diana’s death, but the tragic crash will not be revealed until season six. Elizabeth Debicki pictured in the show

The audio recording along with a transcript of the six-minute call was sold to a tabloid and published.

It was circulated again in 1993 by The People, following the separation of Prince Charles and Diana.

‘They don’t just touch on it, they replicate everything in those tapes word for word in a really kind of lavicious way,’ Rebecca said.

For the upcoming fifth and the final sixth series, Elizabeth Debicki is taking over the role of Diana, who Emma Corrin portrayed in series four. 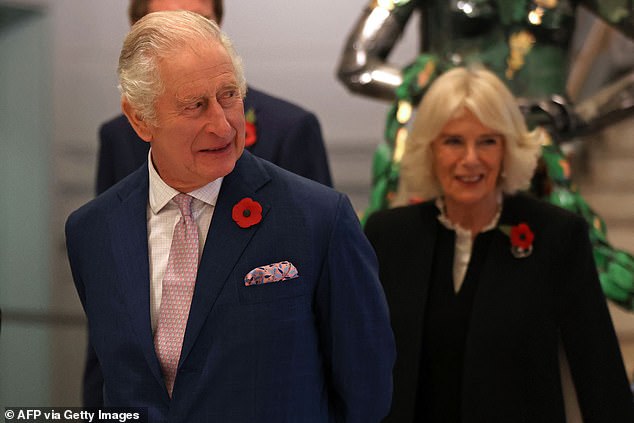 The expert also hit out at the depiction of the infamous recorded private conversation between King Charles and the Queen Consort in 1989. Both pictured this month

The fifth series will document the events leading up to Diana’s death, but the tragic crash will not be revealed until season six.

It will, however, dramatise sensitive scenes including Diana’s divorce from Charles and the infamous Panorama interview with former BBC journalist Martin Bashir.

Debicki said that despite the sensitivity of the role and knowing it would bring intense scrutiny on her, she was never reluctant on joining the show.

She said: ‘I went off instinct and I didn’t overthink it. I’ve watched this show and loved it for years. 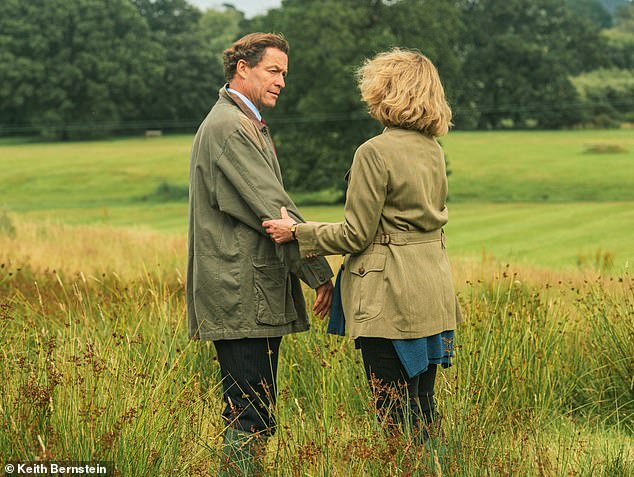 ‘I knew I was stepping into working with people who were extremely intelligent and very sensitive about how they went about creating the script and making decisions.

‘So, I never felt like I’d jumped on unstable ground.’

The show is expected to show a scene where King Charles cuts a holiday short with Diana to host a secret meeting with Sir John at Highgrove in 1991 where they discuss ousting the Queen.

The former Prime Minister wrote in a letter in The Telegraph that the scenes ‘will be profoundly hurtful to a family who are still grieving for the very person on whose life the entire drama was founded’.

Debicki stressed that in her mind the show is a television drama – based on real events.

She said: ‘I mean, it is clearly fictional. I feel like audiences know that, because there are actors playing parts.

‘I never watched The Crown and thought, ‘this is a documentary’ or ‘this is obviously true’.

Another scene expected to be shown in the new season reportedly shows King Charles trying to recruit Sir Blair as an ally to protect his future and pave a way for him to marry Camilla, shortly after he was elected.

The former Labour Prime minister said: ‘It should come as no surprise that this is complete and utter rubbish.’ 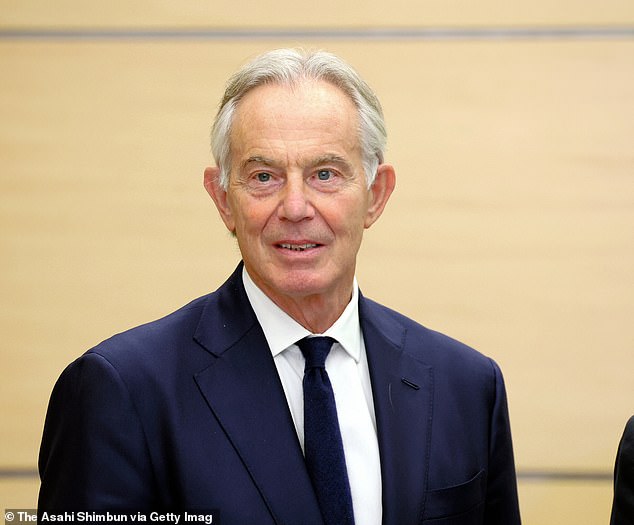 Former Labour Prime Minister Tony Blair hit out at the show, claiming some of the depictions were ‘complete and utter rubbish’

The new series also depicts the King’s BBC documentary Prince Charles: The Private Man, the Public Role aired to the public in an effort to restore his reputation following his divorce.

During the infamous interview, the monarch admitted to journalist Jonathan Dimbleby that he had been unfaithful in his marriage – but only once it had ‘irretrievably broken down’.

In a 1997 Vogue article, Princess Diana’s close friend Anna Harvey revealed that she originally feared the mini black dress was ‘too daring’ and planned on wearing a Valentino design to the event.

But after finding out about her ex-husband’s documentary, the insider claimed Diana wanted to ‘look like a million dollars’ on the difficult evening.

Elsewhere in the trailer, the Princes is seen whizzing away from paparazzi as she drives at full speed in a tense car chase scene.

Being released on November 9, another scene from the new season displays the character floating in a pool in a skimpy swimsuit – as she battles the crisis of royal protocol and family scandal in front of the nation.