If you were a certain age in 1999, chances are that the kiss between Sarah Michelle Gellar and Selma Blair in the film Cruel Intentions was … kind of a big deal.

Director Robert Kumble’s sassy, sexy update on the 1782 Choderlos de Laclos novel Les Liasons dangereuses (Dangerous Liaisons), which translated the action to wealthy teenagers in New York, was a cult hit that spawned a sequel and a prequel … and a jukebox musical of ’90s bangers that’s about to land in Melbourne (followed by a national tour). 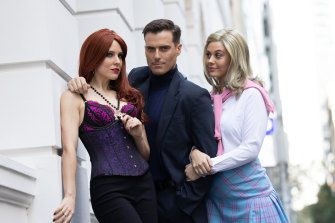 Something of a dab hand at movie-to-stage transitions, the Wedding Singer the Musical star says she was “a little too young” to understand the film when it came out. Though it made an impact.

“When I watched it at some sleepover in my early teens, I remember it being just as shocking as it still is today. It’s very dark and so sexy.” 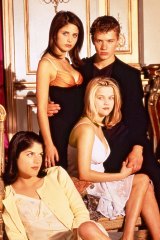 But she was definitely a fan of Gellar, the star of Buffy the Vampire Slayer which was a big deal in the Burgess household. “With I Know What You Did Last Summer too, she had such a big CV in the ’90s. So to go back and study her perception of who Kathryn is, especially in comparison to the amazing Glenn Close [in the 1988, more faithful adaptation Dangerous Liaisons, with Uma Thurman, Michelle Pfeiffer and John Malkovich], was incredible.”

The kiss is present and correct (in an “oral history” of the film, Blair revealed that her mother complained afterwards: “honestly Selma, did you have to use so much tongue?” while Gellar recalled: “all I remember thinking was ‘I could kiss Selma all day’”).

And there’s a classic soundtrack including the Verve’s Bittersweet Symphony and Placebo’s Every You Every Me, played by a live band on stage. There are also ’90s-appropriate additions from the likes of Britney Spears, *NSYNC and Christina Aguilera.

Burgess says the ’90s had an “eclectic” soundtrack: “that baggy jeans, wallets attached to a chain kind of grungy side, but there was also that bubblegum pop too”. The creators added extra pop to give a “little bit of something for everyone”.

But it’s not all just throwbacks to a more innocent/naive age. Burgess says you might see Kathryn in a different light. “Even though it’s set in the ’90s, I get to play this role with our knowledge in 2022. We’re a little smarter now, in a social sense. I mean, she definitely does some horrific things, let’s be honest, but she’s a product of her environment. It’s almost kill or be killed.”

Cruel Intentions tackles twisted plot lines with tongue firmly in cheek. That’s an element producer David Venn says translates into a fun main stage production of a show that started out as an off-Broadway parody, until Kumble himself got involved. “We’re not trying to be too clever,” he says. “It reminds people of their younger days, and maybe some of the crazy things they got up to. Every great story needs conflict, and we’re upping the game, turning up all the production values.”

Having also brought the musical versions of Bring It On and The Wedding Singer to our shores, he knows there’s a hunger for these turbo-charged nostalgia shows. “I loved these movies growing up, and I know there’s a whole world of people out there that also love them, and this is a great opportunity to bring them to life in new and fun ways.”

Discovering exactly how they translate to the stage is a huge part of the appeal for audiences who mainlined these movies way back when, Venn says. “It intrigues them when they come in going, ‘How is this actually going to pan out?’ And I think people will be quite surprised by the way that it does work.”

Cruel Intentions: the ’90s Musical is at the Athenaeum Theatre May 23-June 25 www.cruelintentions.com.au