A front garden is the borderland between the public life of the street and the private life of the home. Strategies for dealing with this border differ. Some gardens exclude you at the fenceline with big gates or a dense hedge; others go too far the other way and waste the garden potential by making the space too public, with lawn all the way from street to a tight collar of planting around the house. 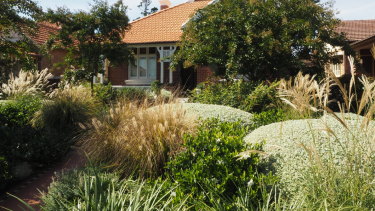 Sydney designer Christopher Owen reckons a front garden should be in conversation with the street, while offering an unexpected experience once you enter. In a front garden he designed in Sydney’s inner west, three white-flowering, red-barked "Natchez" crepe myrtles carry on the conversation with the neighbourhood by echoing the street tree planting, but the garden’s notable absence of lawn forcefully changes the subject. Instead of grass, the large front garden is planted with a matrix of low shrubs, perennials, grasses and groundcovers under the trio of trees.

The design is a tribute to the great American landscape architects James Van Sweden and Frederick Oehme, whose influential book Bold Romantic Gardens, first published in 1990, convinced Owen that garden-making can be an art form of space. Their ideas are evident in the garden’s rejection of foundation shrubs and front lawn, and in Owen’s planting choices. "I chose plant material I think they would appreciate and enjoy, that moves through the seasons," says Owen. "I believe that in Sydney we don’t have to have gardens that are stiff and don't move. We can have gardens that play with the seasons."

Right now the grasses, Miscanthus sinensis "dagio" and pennisetum, are at their flowering peak, and the crepe myrtles are on their way to autumn colour. Gardenia florida has been flowering since last spring, and low-growing echinaceas are waving white flower heads. Echinacea is a Oehme and Van Sweden signature plant, but they may have been less familiar with the loropetalums.

"Loropetalum is really important in the mix," says Owen, "because with their small leaves, tiny flowers, and arching, airy habit, they have a perennial-like form and texture." 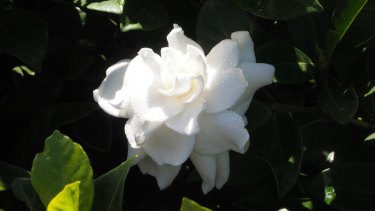 The path curving through the garden to the front of the house highlights different views and sensations – the sunlight behind the grass plumes, dew on a gardenia, the peeling bark of the Natchez, the variation of leaf in two different liriopes, the smell of thyme crushed underfoot, the felty texture of soft grey cushions of helichrysum.

"What I tried to do here is to create and sculpt space by moving the trees away from the house. I made being in the garden feel different to being out there at the gate, giving you a space to pause before entering the house."

Later, leaving, I disturbed a woman looking into the garden. "Is it as good in there as it is out here?" she asked me. Yes.