Spoilers ahead for all of Fuller House Season 4. The Tanner family never shies away from adding another person into their already (ahem) full house. And D.J., Stephanie, and Kimmy have kept that tradition going since Kimmy gives birth to Stephanie’s baby on Fuller House in the Season 4 finale. At the end of the second part of Season 3, it seemed like the Netflix series was setting up Stephanie to have triplets. But the Season 4 finale reveals that Kimmy was carrying only one baby for her brother and Steph. And in a touching final scene of the season, the she-wolf pack welcomes a new addition to the family.

Although Steph doesn’t want to have sex reveal party during the tenth episode of Season 4, "Golden-Toe Fuller," she knows deep down in her Tanner heart that it’s inevitable (especially when you have D.J. and Kimmy wanting to host it). However, the balloon which would have revealed the sex doesn’t pop and so it keeps the anticipation going of what Steph will have a little bit longer. It’s not until the Season 4 finale, "Opening Night," that Kimmy goes into labor during a production of Hamilton. D.J., Stephanie, and the doctor (played by guest star Leslie Grossman) all surround Kimmy as she’s in labor while Joni Mitchell’s "The Circle Game" plays. It’s a moment of women supporting women and so it’s fittingly touching that the baby ends up being a girl. 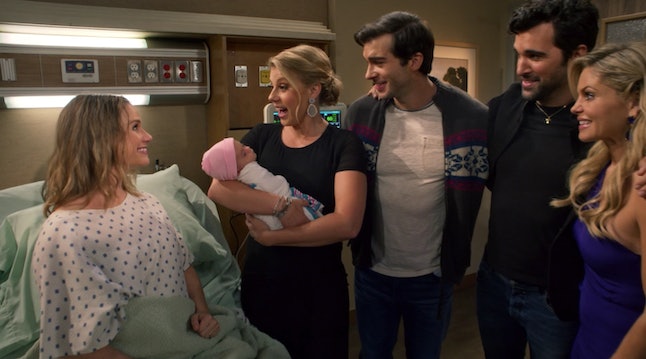 Full House and thus, Fuller House, have always had a focus on the pattern of the sexes with Danny’s three girls being raised by three men and D.J.’s three boys (and Kimmy’s daughter Ramona) being raised by three women. While the show is arguably too concerned with genders, Stephanie and Jimmy would have been happy no matter what. And so they’re over the moon about their yet-to-be-named baby girl.

In fact, Jimmy is so moved that he decides to propose to Steph right after Kimmy hands them their baby. So the Tanner-Fuller-Gibbler family unit is only going to continue to officially grow if there’s a Season 5 since these new parents will also be tying a knot. And considering that Season 4 also reminds viewers that Kimmy and Fernando are engaged after their divorce, a double Gibbler wedding could very well be on the horizon. 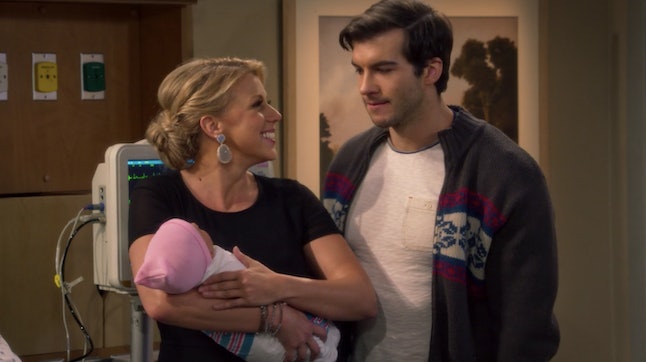 When Fuller House premiered, Stephanie seemed to be channeling the Uncle Jesse role for the revival. But just like Uncle Jesse, Stephanie is showing you can be a little wild, a little less traditional and still create your own loving family unit. Thanks to her soon-to-be-sister-in-law Kimmy, Stephanie and Jimmy were able to have a biological child. And now Kimmy has a niece and Ramona has a cousin.

While there’s already plenty of little ones on Fuller House with D.J.’s son Tommy Jr. and Uncle Jesse and Aunt Becky’s daughter Pamela, Stephanie and Jimmy’s daughter can be the new fresh adorable baby face of the series. Because, just as the Joni Mitchell song goes, time is a carousel that keeps going round. And the Tanner-Fuller-Gibbler family has every intention of continuing that circle of life.