The dramatic ups and downs on Hulu’s new series Shrill are more real than you might think. The show is adapted from author Lindy West’s 2016 essay collection Shrill: Notes from a Loud Woman, with Aidy Bryant’s character of columnist Annie Easton based on West herself. And many of the events in the series are based on true experiences West had, most notably when she published her bombshell body positivity essay "Hello, I’m Fat." That article is central to Shrill‘s first season, and yes, the "Hello, I’m Fat" article from Shrill is real, and it is definitely worth a read for anyone watching the show.

Spoiler alert: This post contains spoilers from the first season of Shrill. As the first season of Shrill progresses, Aidy Bryant’s Annie becomes more and more confident in her body and her instincts and talent as a writer. This confidence reaches a chaotic new height at the climactic end of the fourth episode. After getting lost in a sea of self-love and acceptance at a plus-sized pool party, Annie arrives late to her office’s forced fun bike ride, and her abrasive boss Gabe calls her lazy and sloppy because of her weight.

An outraged Annie vents to her roommate about the lifetime of slights and judgement she has endured due to her weight, and decides to get her feelings out in an unauthorized blog post for her work. Annie titles her post "Hello, I’m Fat," goes to bed, and wakes up to find it has become a massive hit, while also leading Gabe to post a rebuttal focused on health issues and have him totally blow up at Annie for publishing the piece without authorization. 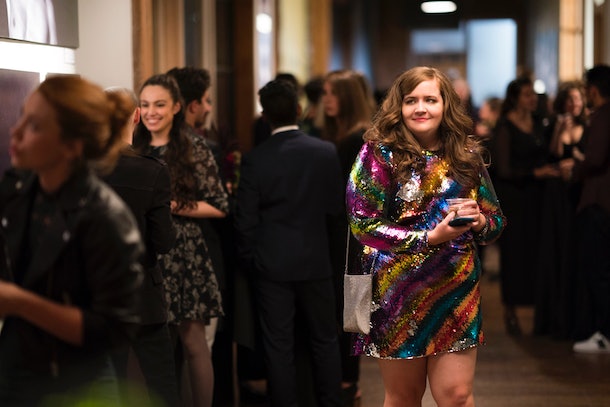 This bombshell article and its editorial response mirrors an actual event in Lindy West’s career that put her on the map as a writer. West began working as a film editors for the Seattle alternative paper The Stranger in 2009. Author and activist Dan Savage was also working at the paper as an editor, and had given particular attention to the "obesity epidemic" in America in several of his pieces. In early 2011, West posted an essay entitled "Hello, I’m Fat" on the paper’s blog, calling out the callous and unhelpful culture of fat-shaming. The blog post was directed at Savage, and Savage posted a lengthy response days later entitled "Hello, I’m Not the Enemy."

After reading that fiery back-and-forth between Lindy West and Dan Savage, Shrill viewers might find themselves thinking that the show’s character of Gabe must be based on Savage. But at the show’s premiere event, West confirmed to Page Six that she and Savage are on good terms and that Gabe is not based on Savage: