The sequel to Sacha Baron Cohen's cult film Borat made headlines this week before it even made it onto television screens, thanks to a controversial scene with Donald Trump's personal lawyer Rudy Giuliani.

But Cohen has a message for those with raised eyebrows: "Watch the film and make up your own mind". 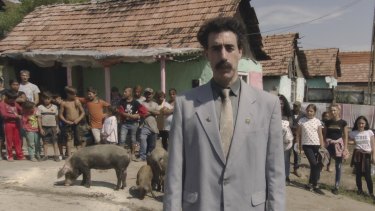 The mockumentary, titled Borat Subsequent Moviefilm, premiered on Amazon Prime Video on Friday. In the Giuliani scene, the former mayor of New York City is shown putting his hands down his pants after flirting with actor Maria Bakalova, who plays title character Borat Sagdiyev's daughter in the film and was pretending to be a journalist. Borat, played by Cohen, interrupts the pair.

Asked about the scene in a Zoom call from San Francisco on Friday, Cohen, 49, said he didn't "want to give away the climax of the movie".

"But what I would say is that I would never, as a producer, have let an actress be in a dangerous situation, so the idea for me was always to intervene as Borat," he said.

After news of the scene spread, Giuliani wrote on Twitter that the clip was taken out of context and that "if Sacha Baron Cohen implies otherwise he is a stone-cold liar".

But that did not faze Cohen, who won a Golden Globe for his turn as the fictional Kazakh journalist in the first Borat film released in 2006.

"I will say he was concerned enough about the interview to call the police and the police actually raided the hotel room afterwards, which generally you need a warrant for. All I'd say is the only person responsible for what Rudy Giuliani did was Rudy Giuliani."

Borat Subsequent Moviefilm follows Borat as he tours America again, 14 years after his last visit and this time accompanied by his daughter, Sandra Jessica Parker Sagdiyev (Bakalova) – who will be presented to Vice President Mike Pence as a "gift" from his government. 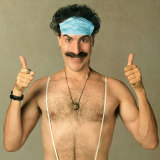 Borat is back, and still stirring up controversy.

Cohen usually remains in character for interviews, but he said he had started to take his public-facing role more seriously after playing '60s activist Abbie Hoffman in the recent Netflix film The Trial of the Chicago 7.

"I'd obviously felt passionately about stuff and let it come out in my work," Cohen said. "But during that filming, I agreed to give a speech at the Anti-Defamation League about the dangers of conspiracies, lies and hate on the internet and it almost mirrored what was going on with me as an actor. I was playing someone who had to stop being the prankster and the clown to clearly express his political opinions."

Cohen said he never intended to revive Borat until a talk show skit he had planned with Kanye West to roast President Trump fell through.

"[West] decided he wanted to ask Trump for permission and I told him that wasn't going to happen," Cohen said. "I had 24 hours to come up with another skit and I called [comedian] Chris Rock for advice and he said, 'Why don't you bring back Borat?' That's when I realised after talking to Americans as Borat all day that he was the perfect character for these times; a more extreme version of Trump."

Part of the discomfort of watching a Borat movie is being unable to predict how the non-actors he ambushes on camera will react. Cohen said his own heart pounded during the stunts.

"I experience fear like everybody else. I often write these scenes with a few people in the room and we think, 'Oh this would be a great scene' but then I get to the day where I am actually doing it and I'm terrified and want to back out."

Cohen said he was happy the film had been released before the Presidential election on November 3.

"Over the next few weeks, we will determine whether the US remains a democracy or slips into autocracy and that's why I am releasing this movie now," he said. "This is my form of protest; me, raising my voice in the only way I know how."