Playwright Richard Murphet wonders why Melbourne’s well-trodden thoroughfares aren’t as immortalised as stretches in other great cities of the world.

“Los Angeles, New York and London have been able to make their streets known to all of us through songs and novels,” he says. “I think we neglect our own streets and alleyways, and it’s important for me to reclaim the streets that I know so well, around the inner suburbs of Melbourne. To say, ‘yes, look, these have history too’. Riots and skirmishes and revolutions have happened here.” 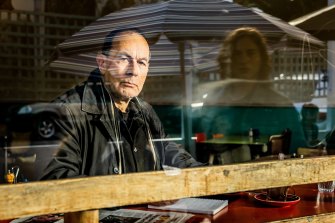 Murphet’s new decades-spanning play The Darkening Sky brings these places to flickering life. The writer/director casts star of stage and screen Brian Lipson as Jamie, a role shared with Matthew Connell. A man coming undone, he’s haunted by repressed memories. “His mother [Edwina Wren] left him out of the blue, at the age of nine, and his true love [Rebekha Hill] disappeared off the streets of Richmond when he was going in to buy a pack of cigarettes and he never saw her again.”

As Jamie perches on a stool in a St Kilda bar, recreated on the Theatre Works stage by set and costume designer Eloise Kent, places from Catani Gardens to Collingwood’s cobblestones are projected ghostlike on the back wall. “The scenes come alive for the old man as he’s remembering them,” Murphet says. 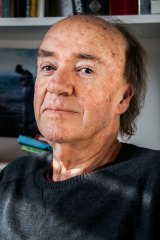 This fusion of filmmaking and theatre craft is the result of a collaboration with cinematographer Jak Scanlon, who shares Murphet’s fascination with juxtaposing mediums. “Jak and I have been working out how we can create scenes that aren’t just illustrating what is being talked about, but are also counterpointing it with silent images that take us somewhere else while complementing the action onstage.”

While the work celebrates Melbourne, Murphet also draws on his fascination with film noir and the hard-boiled detective fiction of Raymond Chandler depicting crumpled antihero Philip Marlowe. Actor Tom Dent plays a detective working on a cold case that crosses over with the gaps in Jamie’s recollections. “What the Chandler novels do is take the grit of something, the very black and white seam of it, and expose it,” Murphet says. “We’re watching, in a way, a forensic construction of the past, which is a bit like an act of remembering.”

Kent has been critical in realising these remembrances, an enormous job that requires costume changes evoking the swinging ’60s, through to the power suits of the ’80s and on to today. “She’s brilliant,” Murphet says. “The bar’s inspired by the Edward Hopper painting [Nighthawks] and that hyperreality that allows us to think about the set as being a dream space, a memory as much as it is a real place.”

Composer Adrian Montana, present on stage as the bar’s piano player, also helps guide us through The Darkening Sky’s shifts in time and Melbourne places. “The music isn’t something we are putting on like a record. It’s alive in the space.”