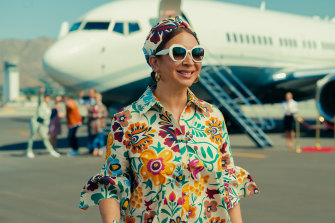 There is a scene in Maya Rudolph’s new TV series Loot where, as a middle-aged billionaire divorcee, she must eat increasingly spicy chicken wings doused in hot sauce for a YouTube channel called Hot Ones.

The character, Molly Novak, vividly inflamed by the chilli-doused chook setting her mouth on fire, sweats, swears and berates the host with such escalating rage and creativity it can only be quelled by downing a full jug of beer mixed with milk. Then, waving her shoes around and prowling the set, she threatens the host with an unhinged ever-hilarious menace.

“Let me tell you something Sean,” Novak says to the visibly unnerved host. “I have $87 billion. I could buy you and this whole studio and every motherf—– in it. And I could shut it the f— down. I could kill everybody in here and get away with it.”

Two episodes later, when Novak sniffs a wealthy friend’s civet musk perfume creation, her retching is compelling enough to inspire laughing and gagging on this side of the screen.

Best known here for her role in the 2011 Paul Feig film Bridesmaids, voice roles in The Mitchells vs the Machines and The Emoji Movie, and years as a regular and guest artist on Saturday Night Live, Rudolph delivers comedy, physical or verbal, with a meticulously judged, shape-shifting blend of elastically wry charm. 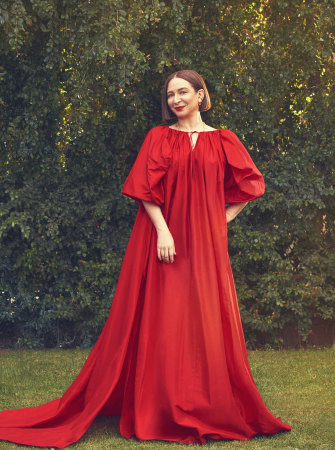 “The retching was really fun,” she says, sitting in a sunny pale-curtained room in Los Angeles. “Those pockets where, you know, you’re going to goof around, that looseness is a place I find a lot of joy and then a great deal of comfort in. I feel like, ‘Oh, I can’t wait. I can’t wait to do that stuff.’”

Loot, a 10-episode workplace comedy created by Alan Yang and Matt Hubbard of shows such as Parks and Recreation and 30 Rock, allows Rudolph to combine comedy and emotional drama in a show centred on the theme of reinvention.

It follows Novak’s attempt to restart her life after discovering her billionaire tech mogul husband, John Novak, played by Adam Scott, has been having an affair with a much younger woman. Molly gets to keep US$87 billion ($125 billion) from the divorce settlement, along with private jets, a gigayacht, copious personal staff and a 21-bedroom, 49-bathroom clifftop Bel Air mansion so large its real-life filming location is the US’s largest modern private residence, known as “The One”.

I’ve been on a screen for so many years. But I’m also at peace with a lot of the changes that are coming my way because they’re like battle scars.

Rudolph’s character, Molly Novak, unsure of her purpose in life after her marriage’s public breakdown, initially spirals into self-doubt. After 20 years focusing on her husband and his efforts building a successful career, she is lost as a single woman.

It’s a common situation, sans the billions, for many women, but not one plumbed regularly for a lead character in a mainstream US TV comedy series. Rudolph was immediately intrigued. 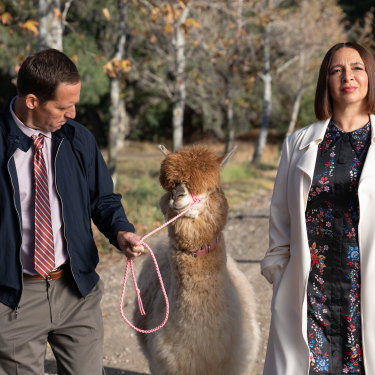 “This project was brought to me and I thought, ‘God, a woman my age going through a divorce,’” she says. “Asking herself the hard questions of, ‘Have I been living the life that I want to live? What did I want to do before I became someone’s partner and supportive of someone else’s career? Would my life have looked different?’

“It’s a great place to look at. Everyone’s going through their own journeys in their life and I certainly feel women my age are thinking a lot about midlife and what it is to be a woman. Feeling, ‘Wow, I’m not as young as I used to be and what does that mean?’ And what does that look like combined with ‘Am I happy?’”

Equally, what does that look like in movies or on TV? In recent times it has manifested as lead characters in Sex and the City sequel And Just Like That…, Hacks, Big Little Lies, Mare of Easttown, The New Adventures of Old Christine, Grace and Frankie and, to a certain extent, comic Bridget Everett’s series about midlife, Somebody, Somewhere.

Loot adds a mega-rich platform, focusing on what a billionaire lifestyle cannot do for your self-esteem, or understanding of everyday people and their world. But, unlike eat-the-rich shows in the vein of Succession or The White Lotus, it’s also showing the perspective of a woman in her late 40s, albeit one with 24/7 access to private jets, five pools and in-house celebrity chef David Chang, searching for her purpose in life.

“It’s commonplace now to hear stories about a couple being together for years and then, in middle age, the husband leaves her for a younger woman,” she says. “I like to call it a newer model. It’s like, ‘I’m tired of this old car that served me well for years. I’d like a new car.’ That’s almost what it feels like.

People loving to flaunt what they’ve got or presenting themselves as fabulous. But it’s all very made up and orchestrated.

“I’m aware of it because I’ve been on a screen for so many years. But I’m also at peace with a lot of the changes that are coming my way because they’re like battle scars. You know, motherhood and all the zaftig [Yiddish for attractively plump] qualities that has given me. And not just that. With time I’ve gained a lot of knowledge and probably a more open mind.”

After her messy, public break-up Molly does find purpose, deciding to take a hands-on approach to an inherited charitable foundation she barely knew about. Loot merges an ensemble workplace comedy with a portrait of mega-wealth’s bubble-like effect on life.

“I think we have gotten so used to enormous wealth,” Rudolph says. “The amount of wealth people are showing today is so extreme. Sometimes I’ll go to Manhattan and go, ‘Who has the money to buy these houses? There’s so much money here.’

“And we’re seeing a lot of reality shows now. People loving to flaunt what they’ve got or presenting themselves as fabulous. But it’s all very made up and orchestrated.” 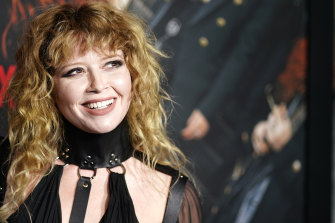 “Animal Pictures came at a time where I was feeling I have so much creative desire but I don’t need to be in everything that I think about. We have this collective amount of people in our lives that are so gifted, so talented, and there are so many stories to tell.

“It genuinely allows [Natasha and me] to spend more time in each other’s lives, combined with a genuine joy for creativity.”

Rudolph’s other joy, mined continually in Loot, is fashion. Few actors appear on red carpets or award shows in outfits as distinctive as the pink floral Giambattista Valli caped gown she wore at the 2019 Oscars or her orange-sequinned Valentino kaftan, with green earrings once worn by Beyonce, at the 2020 awards.

Rudolph’s bespoke emerald-green metallic lamé dress by The Vampire’s Wife at the 2021 Creative Arts Emmys is only matched by her pussy bowed, pirate-sleeved black-sequinned mini, the same designer’s, worn during a performance by her Prince cover band, Princess, in 2020. 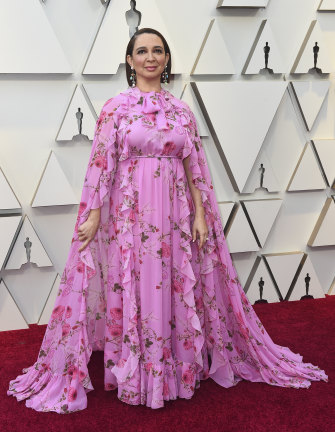 Rudolph in the pink floral Giambattista Valli caped gown at the 2019 Oscars.Credit:Jordan Strauss/Invision/AP

In collaboration with friend and costume designer Kirston Mann, Rudolph’s clothing in Loot includes a made-from-scratch pink Beyonce-inspired suit, alongside clothing by Alexander McQueen, The Vampire’s Wife and Gucci. Today she is wearing a lace-layered dress by Irish designer Simone Rocha.

“I thought I wanted to be a fashion designer when I was a little girl,” she says. “I used to read Vogue and I thought that was everything. I studied fashion illustration in Paris one summer in college, and at Parsons School of Design. I had a fashion show for my senior project in high school. I built my prom dress. I love to dress up so much, so everything, every character I’ve helped create on Saturday Night Live, or any character I’ve been lucky enough to be a part of helping bring to life, I’m always very, very interested in [the clothes design].” 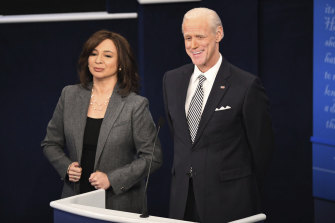 Rudolph as Kamala Harris and Jim Carrey as Joe Biden on Saturday Night Live in 2020.Credit:Will Heath/NBC via AP

Rudolph wasn’t seeking a project focused on the super-rich but Yang and Hubbard’s concept, a format initially inspired by following the public divorce of Amazon founder Jeff Bezos and longtime wife MacKenzie Scott, now the fourth-richest woman in the world, piqued interest for its ensemble comedy chops and insight into humanitarianism and social justice.

“It’s a great conversation to start,” she says. “What if, in today’s world, you woke up to $87 billion? What would you do with it? Would you use it for good? What social responsibility do you feel that you have, if you’re aware of that at all?

“And, when it comes to ensemble comedy, it’s the place where I feel the most comfortable. I really like working that way because it helps me feel funnier and it helps me think of funnier things and feed off of other people. It’s my happy place.”

Loot is playing now on AppleTV+.