At her best playwright Sarah Hamilton suspends time and place, so the two characters float in her play just as the little boat they occupy does in the water. Aided by Kobe Donaldson's projections of sea and sky and the subliminal shimmer of Max Garcia-Underwood and Mario Spate's score, the effect of Charley Sanders' House of Sand production can be mesmerising. Alas, it's not sustained.

Nor is the tension. Were The Split sharpened it would slide between these states of suspension and tension, hypnotising us one moment and riveting us the next. Instead, Hamilton pads her text with mundanity that can be so stultifying it's as though the boat has drifted from waters of turquoise crystal into an oil slick. Presumably her point is our tendency to talk about anything other than what is pivotal. The problem in dramatic terms is that while her characters studiously avoid conflict they bore us with their inconsequentialities. One especially laborious exchange has them both saying "mate" as many different ways as they can muster, without a spark of humour. 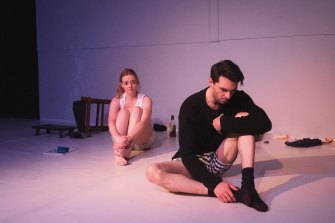 The Split presents Jules (Amy Victoria Brooks) and Tom (Max Garcia-Underwood) having a summer holiday lazing on a borrowed fishing boat. Theirs is a dysfunctional relationship, and the potential fracture of the title permeates the play like glare off the water – water in which Hamilton specifies they bathe. Sanders' ingenious solution is for the actors to rest their abdomens on small trolleys (about twice skateboard width) and "swim" their way about the stage. Add projections and score and you almost feel your feet getting wet.

Were the boat smaller (its shape defined by little props), the actors' closer proximity may have turned up the heat on the non-physicality of their relationship. We are an hour into the 90 minutes before Tom asks the play's fundamental question: "Why did we come on this trip?" Perhaps it was to find each other again, but it's only when they discuss lusts that lie outside their relationship that we glimpse a latent potency had Hamilton investigated them with a scalpel rather than a pink pencil.

The performances locate a certain playful charm, but one never senses the chemistry of their being a couple. While Garcia-Underwood is more consistent, Brooks needs the tension to rise to come into her own. As does the play.