It’s undeniable that Lady Gaga’s periwinkle Golden Globes gown was a look and a half; however, the truth about inspo behind it might be more up for debate. After she debuted her look on the carpet, Twitter was over the moon pointing out similarities to a gown worn by a former A Star Is Born actress, the ultra-famous Judy Garland. However, a video of Lady Gaga saying her Golden Globes dress wasn’t inspired by Judy Garland has now gone viral and been totally meme-ified, and we now know the truth: it was all a happy accident.

Gaga’s custom Valentino gown, complete with perfectly poufy sleeves and a lengthy train, was the absolute perfect choice for her first time on the Golden Globes carpet as a nominee. It was statement-making, graceful, and classic, but her matching blue hair still managed to give us that Gaga edge we all know and love. Fans loved her look, and were quick to point out the similarities between her dress and a gown worn by Judy Garland in the 1954 version of A Star Is Born. The dresses are the same color, and both featured statement sleeves and similar bodice silhouettes. Of course Gaga was attempting to channel Garland, right? Wrong.

Even though there were undeniable similarities, the gowns are apparently totally unrelated:

How can this be? When Gaga spoke to Entertainment Tonight’s Nancy O’Dell and O’Dell mentioned the homage, Gaga had virtually no clue what she was referring to. O’Dell whipped out a photo of Garland’s gown to clarify, and Gaga seemed totally shocked.

You can see the interaction yourself at around 2:06 in:

"Oh, you know what, I don’t, I…We didn’t say that," stammered Gaga, who was undoubtedly shocked by the all-too-accurate comparison. Immediately, Twitter jumped on her startled reaction, but to be clear, it seemed she was genuinely unaware, not offended. If anything, she was probably dumbfounded as to how she could possibly be wearing such a similar gown with no knowledge of Garland’s own. Maybe the team at Valentino had the 1954 version in mind and didn’t let Gaga in the loop? Who knows.

Jokes aside, Gaga kept her cool and seemed pleased with the comparison. "It looks an awful lot like that, doesn’t it? She looks beautiful," said Gaga, noting that she was sadly missing the gloves. "Thank you so much for showing me that, that made my night," she told O’Dell. Who knows whether or not she was in on the inspo, but her reaction did seem pretty genuine, so even if others knew, I’m thinking Gaga really was unaware. That, or she thought no one would notice given her blue top knot and fierce smokey eye, both very unlike Garland.

Inspired or not, Gaga’s look was perfection, as far as I’m concerned: 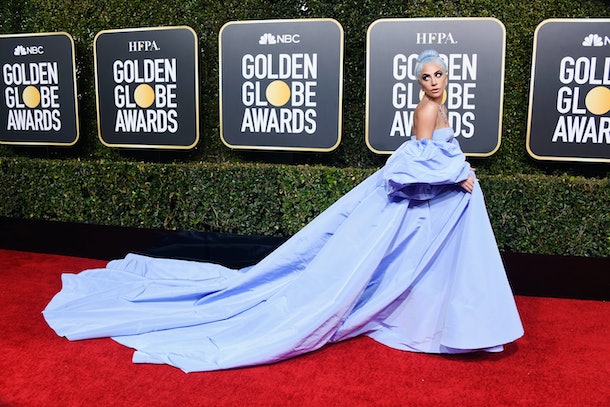 Fashion, like history, tends to repeat itself, so it’s not surprising to see styles that channel familiar vibes every now and again. Maybe this just proves Gaga was destined to reimagine Garland’s A Star Is Born role? The way I see it, the more gorgeous periwinkle gowns, the better, so no complaints here.