Urzila Carlson is a straight-talker, all right.

An ambassador for the New Zealand Breast Cancer Foundation, on last year's stand-up tour of Australia she plugged her role and the importance of health checks. 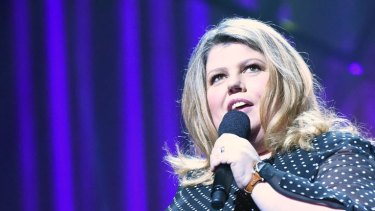 More than 12 years as a resident across across the ditch hasn't dulled the acerbic spikiness acquired from her previous life in her native South Africa, where everyone and everything "actively tries to kill you on a daily basis".

Her trademark straight-talking has had her on a solid upward trajectory as a stand-up for 10 years, and as a regular face on Australian stages and the panel TV circuit with gigs such as Have You Been Paying Attention?

This year will be her biggest year yet, with an Australian tour for her new show Loser, including a full run at Melbourne Town Hall for the comedy festival – the first woman comic to hold that claim – and a show at the Sydney Opera House Concert Hall.

She's also features in a recent Netflix series, featuring a selection of hand-picked comics filmed at the Montreal Just For Laughs festival, who get a half-hour special each.

But despite her apparent bluntness, good manners are a keen focus. It's a thread that runs through her life, particularly with so much time spent on the road, negotiating hotels and airports, and – worse – the travelling public.

"I travel a lot. So I get to see a lot of people and a lot of different countries, and the one thing, regardless of the language you speak, or the culture or the religion, or whatever you are, good manners come through, even if you don't understand the language.

"It's almost like a dying art form, no one does it any more."

Good behaviour is one of the themes of Loser. "I'm taking 'loser' back, and trying to make it positive, because it's always negative, except when you lose weight, then it's positive," she says.

"So, we need to flip that around. There's a lot more negative things that you can attach to that. Like people that don't say 'thank you', people who don't greet you back, when you see people and you go, 'hi', and they just sort of stare at you blankly. Those people are losers, not fat people losing a few kilos."

She says one of the highlights of her career so far was filming the Netflix special this year. It's not least because of reaching the sacred ground of Montreal's Just For Laughs, but also for what Netflix is doing in reinvigorating stand-up.

"It's just great to get people that wouldn't normally go to stand-up to see what it's like now. Because I think a lot of people, when they think stand-up, they go, 'I'm just going to get ripped apart'. It's not like that any more."

Urzila Carlson's Loser is at the Sydney Opera House Concert Hall on June 15.