THERE'S a ray of hope for jobseekers as new figures show the number of vacancies increased for the first time since February.

Both permanent and temporary jobs increased in September as businesses reopened following the coronavirus lockdown. 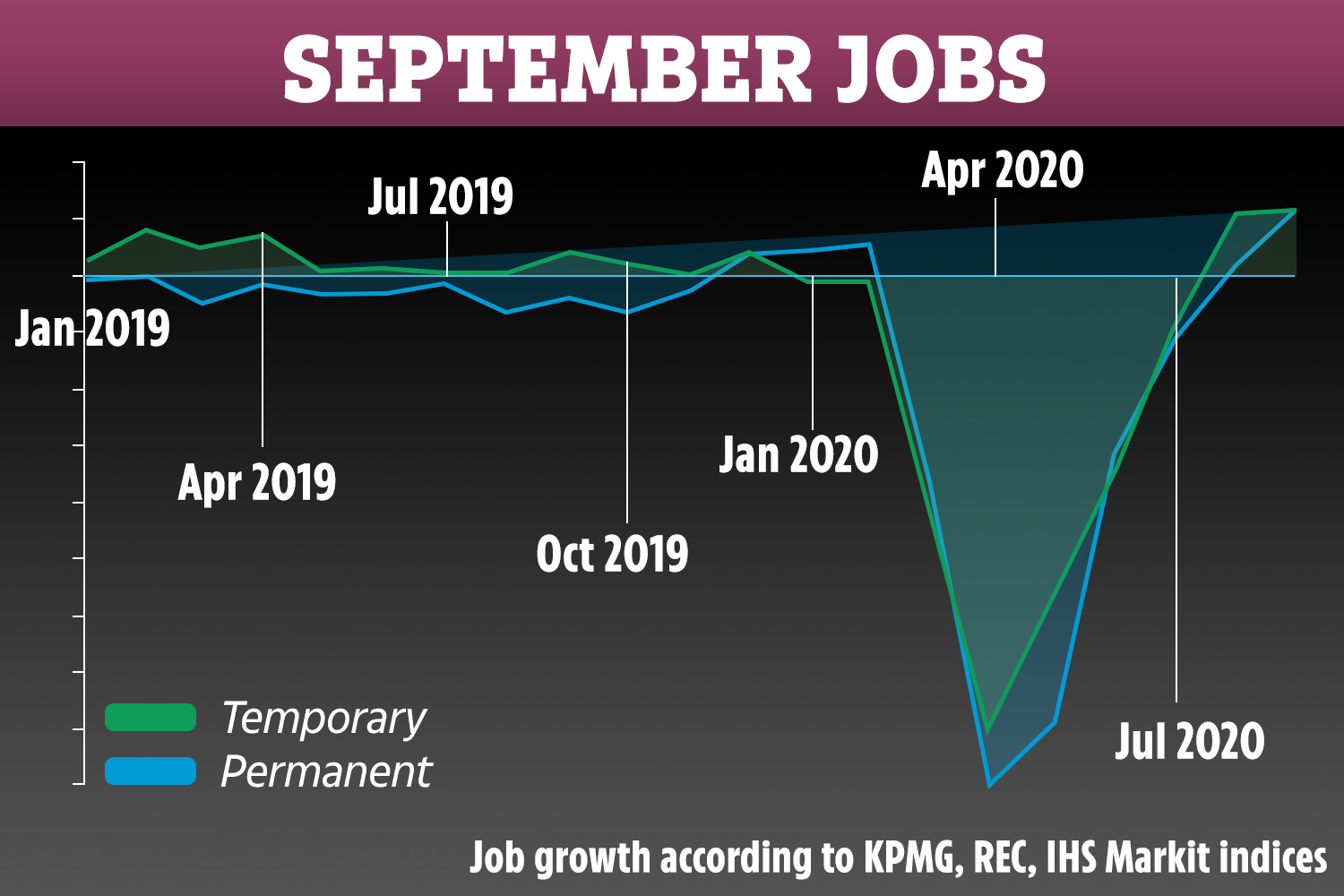 It was the biggest monthly increase in staff hiring for two years.

Nearly 7000,000 Brits are out of work since March and the unemployment rate hit 4.1% in September.

The new findings come from the latest monthly jobs report produced by consultancy firm KPMG, the Recruitment and Employment Confederation (REC) and IHS Markit which surveys hundreds of recruiters to understand hiring activity.

Hiring activity was recorded as 56 last month – anything over 50 is positive.

The biggest growth was seen in the Midlands for both permanent and temporary roles.

Hiring for permanent staff increased everywhere in England apart from London, where there was also a marginal decline in temporary hiring.

IT and computing along with construction and engineering saw the biggest rise in vacancies, while hotel, catering and retail jobs experienced the biggest fall.

A wave of redundancies have been announced in these sectors and Greene King the latest to announce that it will close 79 pubs and axe 800 jobs after the 10pm curfew was introduced.

Driver and warehouse worker were among the fastest growing temporary job vacancies.

Many supermarkets have created new jobs to support the increase in online deliveries in recent months, along with online retailers like Amazon.

Where job vacancies are rising

The survey also found pay has been pushed down – the wave of redundancies caused by the pandemic has increased the number of candidates available for work.

Pressure on businesses budgets from the pandemic also contributed to pay falling.

THESE are the top 15 CV faux pas that you want to avoid when applying for a job:

James Stewart, vice chair at KPMG, said: “While it’s encouraging to see a further recovery in hiring activity and that growth in permanent staff appointments was the strongest for almost two years, it’s concerning to see another rapid rise in total candidate availability.

“The Government has got challenging times ahead to continue to offer adequate support to business, opportunities for jobs seekers to upskill while helping instil confidence in the UK workforce.”

The government's furlough scheme will come to an end this month and the new Jobs Support Scheme will launch to help save some jobs which continue to be affected by the pandemic.

But the new scheme and other support measures will not prevent mass job losses, Mr Sunak has said.

Check out these 8 top tips for rewriting your CV from recruitment experts.

The Sun has teamed up with hundreds of the UK’s top companies to bring you all the best new job opportunities — and expert advice to get you back to work, fast.

Cineworld has confirmed plans to temporarily close all 127 of its UK cinemas following the coronavirus crisis, affecting 5,500 employees.