We are just about three months away from the introduction of the Marvel Cinematic Universe’s latest superhero, and the newly released second Captain Marvel trailer will have you more pumped for Carol Danvers’ intergalactic journey than ever. But this is Marvel we are talking about, which means you cannot expect to catch all of the subtle references and details in the trailer in just one watch. Here are some of the easter eggs in the Captain Marvel trailer that you may have missed.

On Monday night, Marvel released its highly anticipated second trailer for Captain Marvel, starring Brie Larson as the eponymous half-human, half-alien superhero. The new trailer is a perfect follow-up to the first trailer, which dropped three months ago. The new footage includes even more time in space as we get to see details about how the human Air Force pilot Carol Danvers wound up becoming part Kree and developing her unmatched superpowers.

The first detail that fans will notice is a confirmation about what was really going on during the major moment from the first trailer. At the end of trailer number one, we see Captain Marvel punch an elderly woman in the face on the subway. This may have been shocking for those unfamiliar with Captain Marvel‘s villainous race, the Skrulls, but Marvel fans know that the Skrulls can shapeshift into any form. The new trailer quickly confirms that this old woman was indeed a disguised Skrull.

The new trailer also gives us a first or better look at a bunch of the new characters that Captain Marvel will be ushering into the Marvel Cinematic Universe… and even one old character who you probably missed. We get another look at Jude Law’s Mar-Vell, the mentor to Carol Danvers as she comes into her powers, and Ben Mendelsohn as the Skrull leader Talos. But the big reveal is Annette Bening in a still mysterious role — we see Bening’s character reveal to Danvers that she found the pilot with no memories and made her part Kree. Although her exact role has yet to be revealed, some fans are already theorizing that Bening is playing the Supreme Intelligence, a being created from the greatest minds to ever exist in Kree history.

But there is also a familiar character that you might have missed in the trailer. Guardians of the Galaxy introduced Ronan the Accuser as its main villain, but Captain Marvel will go back to a time when Lee Pace’s character was not so mad with power. Although the younger version of Ronan hasn’t shown his face yet, the new trailer does give us a very quick peek at the back of the Kree official’s head during one scene. 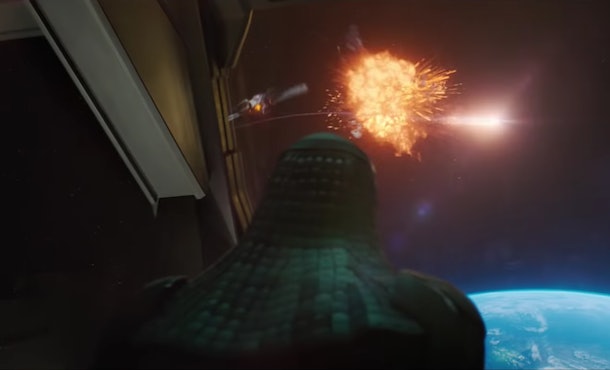 The last moments of the trailer introduce Carol Danvers’ cat. In the comic books, the cat is named Chewie, but the movies chose another famous co-pilot to name the pet after: Goose. And the young Nick Fury is already bonding with Goose very well. Speaking of Nick Fury, there is also a bit of an easter egg regarding his appearance. Throughout the trailer, Fury has bandages directly above his left eye. 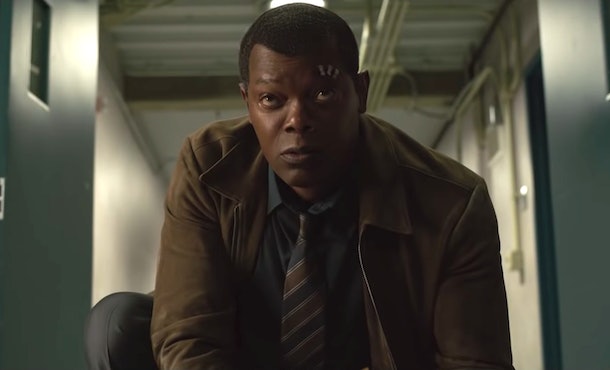 Of course, we all know that Nick Fury will be rocking an eyepatch over his missing left eye in the near future, which these bandages seem to be foreshadowing. Fans also think that we will finally see how Nick Fury lost his eye in Captain Marvel, especially given a line from Captain America: The Winter Soldier where Fury says that he lost his eye "the last time [he] trusted someone." Could that trusted someone be Carol Danvers? It sure seems like it.

Captain Marvel will fly into theaters on March 8, 2019.