What’s better than fried chicken? Fried chicken and waffles, of course! After a successful run on menus last year, these Kentucky Fried Chicken & Waffles are back on the KFC menu for a limited time, so make sure to grab this finger’-lickin’ good sandwich before it’s gone.

From March 23 to April 29, 2019, fast food restaurant KFC is bringing back the fan-favorite Kentucky Fried Chicken & Waffles to select U.S. restaurants, per a press release. KFC customers and chicken and waffle enthusiasts can enjoy the treat three different ways. First is the sandwich option that features a KFC breast fillet inside two waffles and topped with Mrs. Butterworth’s syrup. You can get just the sandwich for $5.99 or make it a combo meal for two bucks more. You can also enjoy the sandwich as part of KFC’s basket meal option, which includes a one-piece breast, two-piece thigh and drum, or three-piece tenders as well as waffle, KFC’s Extra Crispy fried chicken, and a side of Mrs. Butterworth’s syrup, all for $5.49. If you’re really hungry, you might opt for the third option — the Big Basket meal. You’ll get two waffles, two syrups, and a choice of two-piece white meat, three-piece dark meat, or four-piece tenders for $7.99.

If you’re craving a sweet and savory snack or meal, these limited-time Kentucky Fried Chicken & Waffles from KFC will surely hit the spot. 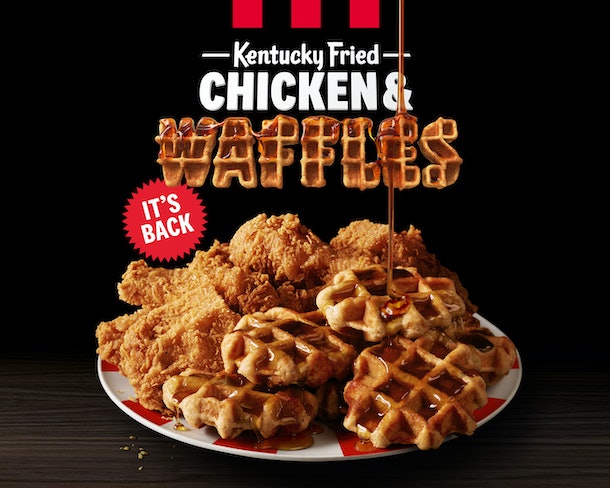 According to a press release, when KFC introduced its Chicken & Waffles creation back in November 2018, some restaurants sold out of the dish in just two weeks. In the press release, Andrea Zahumensky, the chief marketing officer of KFC U.S, said that while the company expected people to love KFC Chicken & Waffles, it "underestimated how much love there would be."

What makes KFC’s Chicken & Waffles dish so special and distinct from other iterations of the dish? The waffles are made specifically to pair with KFC’s fried chicken recipe and use pearl sugar imported from Belgium for the sweet, golden-brown color and crunchy outer texture. KFC went through 15 waffle recipes to find the perfect one for its Chicken & Waffles dish and judging by the meal’s popularity, the company landed on the right one. Make sure you get your fill before they leave menus on April 29, while supplies last.

The fried chicken restaurant is no stranger to delicious fried chicken mashups. Recently, KFC locations in Singapore introduced the Mac ‘N Cheese Zinger, which contains a KFC Zinger chicken fillet, turkey bacon, lettuce, and cheese sauce, nestled between two crispy mac ‘n cheese patties. In January, KFC started testing a Cheetos Chicken Sandwich in various cities across the U.S. because yes, I was actually lacking a fried chicken sandwich coated in Cheetos sauce and filled with actual Cheetos in my life. In fact, you don’t even have to be hungry to enjoy KFC’s creativity. Earlier this year, KFC revealed a Gravy-Scented candle that looks like a chunk of solidified gravy. I usually prefer more earthy candles but am open to the idea of burning one of these bad boys at the right time.

Whether your burning KFC-scented things or eating creative new recipes, there’s no shortage of finger-lickin’ goodness to go around.