Cameras were rolling when Shah got an alarming phone call … before authorities rolled up on the scene to arrest her.

Bravo released the first seven minutes of the Season 2 premiere online Tuesday, a week ahead of the big premiere. And right off the bat, Jen’s in hot water.

The cold open shows Jen, Whitney Rose, Heather Gay, Lisa Barlow and Jennie Nguyen all boarding a party bus for a girls trip. Heather explains that Meredith Marks and Mary Crosby won’t be joining them for the ride, but would be meeting them at their destination. As the women sit in the bus, Jen gets a phone call from someone, presumably husband Sharrieff Shah.

“Hi baby, no, not yet. We’re at Beauty Lab and Laser in the parking lot. Okay,” she begins, before looking straight into the camera and realizing this call may warrant some additional privacy. She then puts the call on hold and asks Whitney, “Can you turn this off? Can you turn it off?”

Whitney then helps her take off her microphone, before she gets out of the van. After hanging up, she simply tells everyone, “I have some bad news. I just got a phone call and I need to go.”

Moments after she leaves, the Sheriffs department shows up in the parking lot, telling production, “We’re looking for Jen Shah.” 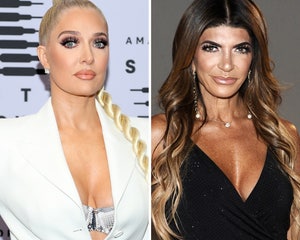 “You guys, what if she’s on the run,” says Heather — before Lisa wonders how authorities knew where to find her. “Someone had to have told them she was here,” she says.

At Jen’s house, meanwhile, authorities arrive with a search warrant as Bravo’s cameras roll. It’s not long after that news of Shah’s arrest that same day — while rocking those same braids — starts making headlines, with Whitney reading about the charges on her phone in the party bus.

“I have the f—ing chills,” says Whitney, before a series of quick clips from the rest of the season revolving around Jen’s legal drama start to play. “I don’t think she’s who we think she is,” says Lisa — while Meredith adds, “She’s not!”

Heather, meanwhile, is worried about being involved with Jen in any way, before Whitney adds, “If we do not share what we know, we’re in danger.” The clip ends with all the women in confessional, being asked whether they know who tipped off the authorities.

The show then cuts to the main credits, as Jen reveals her new tagline, which takes aim at her current predicament: “The only thing I’m guilty of is being Shah-mazing.”

The Bravolebrity was arrested in March, after she was accused of generating and selling “lead lists” of innocent people who could be targeted as part of a telemarketing scam for almost a decade. Many of the victims were elderly and working class. She pled not guilty to conspiracy to commit wire fraud and conspiracy to commit money laundering charges in April.

While she awaits her October trial, she’s been busy filming Season 2 of RHOSLC, which premieres September 12 on Bravo.

Jen Shah Thanks Supporters After Pleading Not Guilty In Telemarketing Scheme