‘You’re promoting eating disorders’: This Morning viewers slam diet expert for advising overweight people to be DISGUSTED by their fat

A diet expert has been accused of ‘fat-shaming’ and ‘promoting eating disorders’ by angry viewers in a diet segment on ITV’s This Morning with presenters Eamonn Holmes and Ruth Langsford today.

Weight loss and motivational guru Steve Miller told viewers to talk to their food and to tell themselves they are ‘too gorgeous to be fat.’

‘You have to have two emotions to lose weight and to keep it off. You have to be disgusted with fat – not the “person” before anyone Tweets out at me – because disgust is a great motivator.

‘And you have to be massively aspirational about yourself and about your potential as a slim person.

Twitter users were quick to share their anger at Steve’s comments,  with one accusing him of fat-shaming, saying: ‘This is seriously promoting disordered eating.’

Another added: ‘So what this man is saying is that you can’t be gorgeous AND fat? Wow what a great message to spread to impressionable people! Disgusting! What a way to scare people into eating disorders!’ 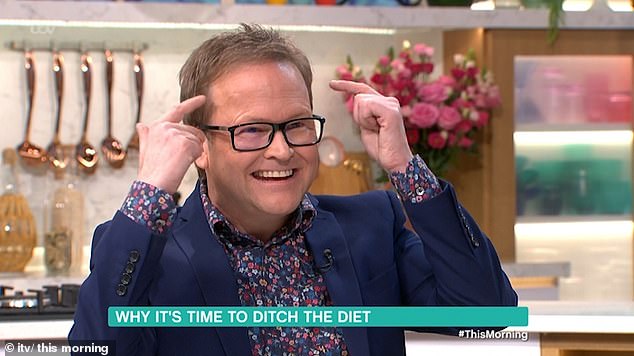 Steve Miller, who was introduced as a This Morning diet expert, outraged viewers by advising them to talk to their food, look at ‘old fat photos’ while they were eating and tell themselves they were ‘too gorgeous to be fat.’

Steven’s advice on the show also included looking at an ‘old fat photo’ and an item of clothing you wanted to fit into while eating. Many of Steve’s comments were directed at Eamonn, in particular, saying he was worried the presenter had ‘put a bit on.’

During the segment, which started with the title ‘ditch the diet,’ Steve encouraged viewers to speak to their food advising them to say: ‘Muffin, I am in control of you. Yes muffin, you have made my life hell for so long.

‘You have been responsible for me not being able to go into the wardrobe to wear the clothes I want to wear so, muffin, guess what I’m the gaffer now not you.’

He also advised them to put signs up in their home and in their car, as well as repeating mantras in their head, including the phrases: ‘You’re too gorgeous to be fat,’ ‘Fat destroys’ and ‘Fat off, junk food.’ 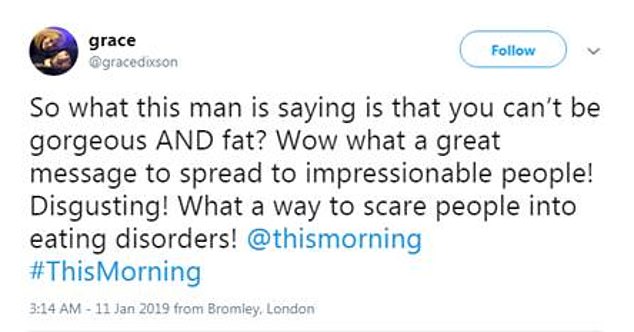 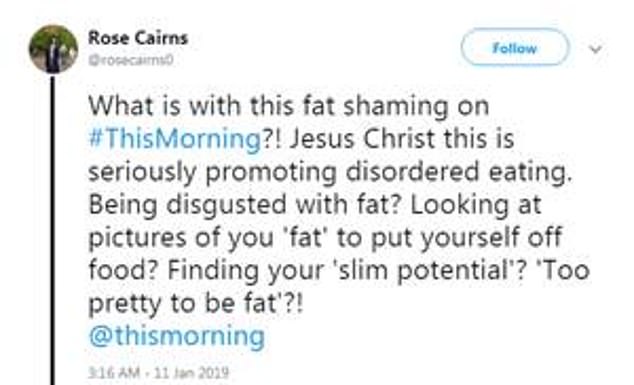 Shortly after, he addressed Eamonn directly telling him: ‘You need a goal that’s real. Everyone talks about goals that are motivational and that’s really important. For you [looking at Eamonn] it’s “life.’ ‘Yeah, staying alive!’ responded Eamonn’s wife and co-host Ruth.

But Steve soon attempted to justify his comments to Eamonn saying he only said it because he cared about him and didn’t want him to have a heart attack, stroke or ‘end up in a box.’ 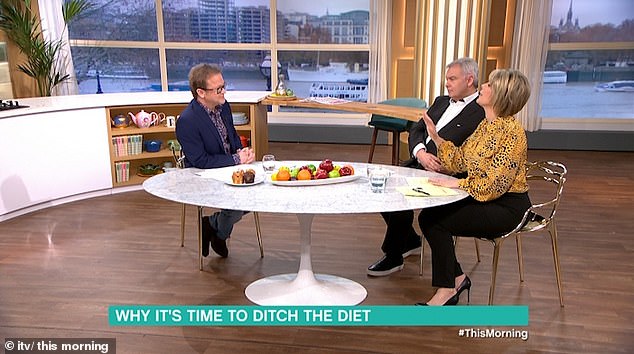 During the segment, that aired today, Steve also told presenter Eamonn Holmes he was worried he had put a bit of weight on although said he was only telling him because he ‘cared’ and didn’t want him to have a heart attack

Anticipating a negative social media response, Steve told Eamonn and Ruth: ‘I know sometimes people say “Oh you’re so blunt” and that sort of thing. “He uses the word fat and he’s a fat shamer.”

‘But at the same time you’ve got to have some inspiration about yourself – knowing you’re too gorgeous to be fat.’ 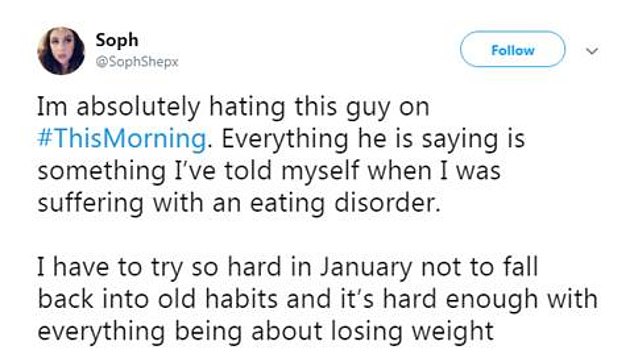 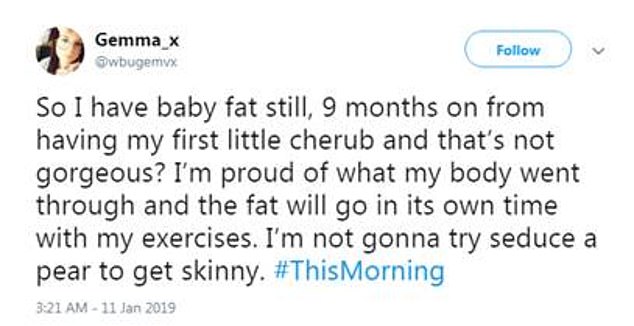 Steve had already anticipated the social media response, explaining he was ‘bored of being called a fat-shamer’

The daytime television segment ended on a somewhat jovial note, though. ‘But Eamonn… you don’t get fat on that,’ responded Steve after Eamonn suggested he’d prefer the fruit bowl to the plate of sweet muffins any way.

‘I didn’t finish… I do like a bit of fried chicken though,’ followed Eamonn. ‘A bit?’ questioned Steve.

Despite the jovial note, viewers were unimpressed with Steve’s comment.

‘So I have baby fat still, 9 months on from having my first little cherub and that’s not gorgeous?’ one wrote.

‘I’m proud of what my body went through and the fat will go in its own time with my exercises.’

Another, wrote: ‘I’m absolutely hating this guy on This Morning. Everything he is saying is something I’ve told myself when I was suffering with an eating disorder.

‘I have to try so hard in January not to fall back into old habits and it’s hard enough with everything being about losing weight.’ 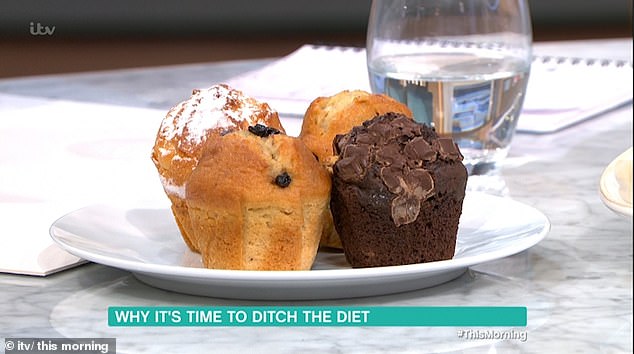 As part of the segment, Steve suggested viewers told their food, including muffins, that ‘they were they gaffer now’ and that they were ‘in control.’ Eamonn later joked he preferred fruit to muffins anyway 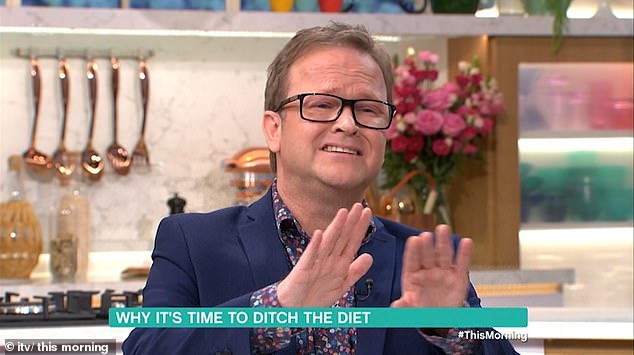