Little Women has always been ultimate goals: It’s the story of four strong, unique women who battle life’s ups and downs while nurturing their friendships with each other. It was like Sex and the City or Girls before the concept of "ladies’ night" was ever invented. The 19th century literary classic by Louisa May Alcott chronicles the ups and downs of the March family, and it’s been brought to life on screen several times. But the latest adaptation is elevating the story to another level of cool with its stellar cast and creative team. Star Emma Watson just posted a photo of the Little Women cast hanging out with director Greta Gerwig, and it looks like a dream slumber party anyone would jump at the chance to attend.

The photo shows Watson as oldest March sister Meg, director Gerwig, Saoirse Ronan as family firecracker Jo, Florence Pugh as youngest sister Amy, Eliza Scanlen as middle sister Beth, and Timothée Chalamet as love interest Laurie. Laura Dern and Meryl Streep will also star in the film, although they’re not in the photo. Maybe Meryl took the picture while Laura stood behind the camera and reminded everyone to "say cheese"? One can only dream.

Watson quotes Alcott in her caption, “I could never love anyone as I love my sisters," which, if you’re anything like me, will probably make you immediately cry and text all the ladies in your group chat a bunch of heart emojis.

The faded filter of Watson’s Polaroid picture makes her post look like the kind of pic you’d find on your trendiest friend’s Instagram, and it only ups the cool-factor of this already dazzling, star-studded photo. The cast looks so cozy and comfortable on set, which is key for a movie about such a tight-knit family. It makes sense that Ronan and Chalamet are relaxed with each other and with Gerwig, since they appeared on screen together last year in Gerwig’s directorial debut Lady Bird. Both Gerwig and Ronan earned Oscar nominations for their Lady Bird work, so chances are good that the Academy will be paying close attention to this next project. 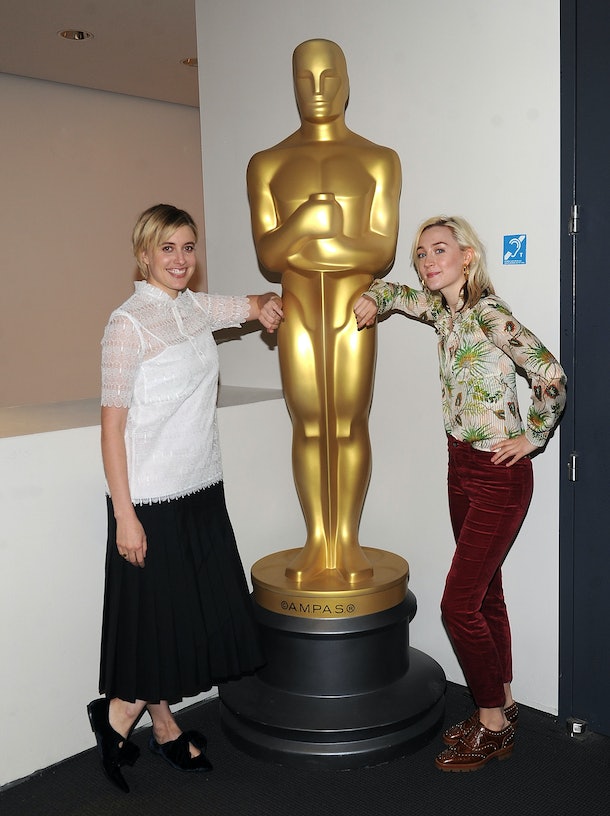 Previously it was announced that Emma Stone would appear in Little Women, but she had to drop out due to scheduling conflicts. So, Watson stepped in to replace her, and luckily it looks like Watson is fitting in with her cast just fine. This is actually the second time pictures of Little Women cast have surfaced. The first was when Watson and her cast members were spotted filming a scene in costume as the March sisters in Boston in November. Any sight of the sisters arm in arm is enough to bring on all the feels.

Gerwig’s Little Women is actually the third on-screen adaptation of the book to be made this year, even after dozens of adaptations have already been produced in previous years. So why all the attention on Little Women right now? Anne Boyd Rioux, an English professor at the University of New Orleans, told The Hollywood Reporter that the story’s feminist ideas of equitable romantic relationships and supportive friendships are especially relevant in today’s #MeToo-charged socio-political climate. It makes sense that right now audiences want to see women they look up to telling a heartfelt, inspiring, and familiar story.

Little Women debuts in theaters on Dec. 25, 2019, but until then, Watson’s cast photo is here to inspire you.