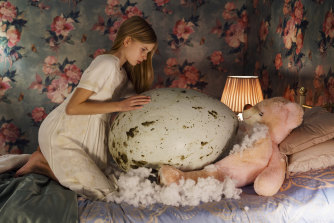 What’s in the egg?Credit:Rialto Distribution

One swallow doesn’t make a summer, and just because two Scandinavian horror-thrillers have opened in Australian cinemas in as many weeks – The Innocents, from Norway, and now Hatching, from Finland – it doesn’t mean we’re looking at the next big trend.

Still, some kind of pattern seems to be emerging, especially when these new releases are placed alongside a US film such as Midsommar, set in a fantastical version of Sweden.

The society pictured in this kind of horror is one that seems a little too clean, too wholesome, and above all too white – all of which proves to be a mask for something monstrous.

Directed by first-timer Hanna Bergholm from a script by Ilja Rautsi, Hatching introduces us to one of the blondest families in movies, presided over by Aiti (Sophia Heikkila), whose floaty, pleated dresses and cheery smile suggest a Stepford Wife edition of Agnetha from ABBA.

Yet she’s very much a 21st-century woman, showcasing her picture-perfect family in online videos that co-star her 12-year-old daughter Tinja (Siiri Solalinna), a Mini-Me pushed relentlessly by her mother to succeed as a competitive gymnast.

Dad (Jani Volanen), meanwhile, is a gentle, cardiganed dork usually seen tending to his roses – and seemingly unaware of the tensions in the household, including the fact his wife is falling for a younger guy (Reino Nordin).

Cracks in the surface are visible right from the opening sequence, in which a crow invades the family living room while Aiti is shooting one of her videos with a selfie stick. This becomes a showcase for Bergholm’s own filmmaking ingenuity, with intentionally jarring cuts between “reality” and the home movie gone awry.

Aiti disposes briskly of the invader, but more disturbing developments follow. Venturing out into the woods at night, Tinja happens on a mysterious bluish egg, which she secretly brings home with her, keeping it warm by placing it inside a giant teddy bear.

When it hatches … well, I won’t describe exactly what emerges, but admirers of the work of Jim Henson’s Creature Shop (think the puppets in The Dark Crystal) are going to be very pleased.

At least, in the short term. Hatching has been described in some quarters as “body horror” but in practice the special effects sequences are rather sparingly portioned out, perhaps for reasons of budget. Nor does the actual story altogether live up to the immediate promise of the film’s style, including the witty costumes and production design.

But Hatching, as its title suggests, is a film about birth and breaking free. Bergholm may not venture as far afield as might be hoped, but in less than 90 minutes she announces her arrival as a talent to keep an eye on; hopefully we’ll soon see what happens when she really takes wing.