OK, everyone just relax. There is no bad blood between the Duchess of Sussex and the Duchess of Cambridge, so seriously stop saying that. This video of Meghan Markle and Kate Middleton walking together on Christmas Day shows that the sisters-in-law are doing just fine, thank you very much, despite what rumors have been suggesting. Fans have been concerned that bad blood might be secretly brewing behind the palace walls due to certain reports, but Christmas is here to say, "Hell, no." Honestly, I could watch a video of these two sitting and staring at a wall and it’d be a blast, but knowing they’re celebrating Christmas together makes it that much more special.

The Duke and Duchess of Cambridge and the Duke and Duchess of Sussex stepped out in wintery outfits to attend a Christmas church service together and luckily cameras were there to catch the moment. Pregnant Meghan Markle wore an elegant navy blue dress and coat while Kate Middleton opted for a deep red ensemble. In true traditional royal fashion, their hats, dresses, jackets, gloves, and shoes all matched. They strolled side by side with their husbands, Prince Harry and Prince William, while camera shutters clicked away. Here are just a few of the lovely photos. 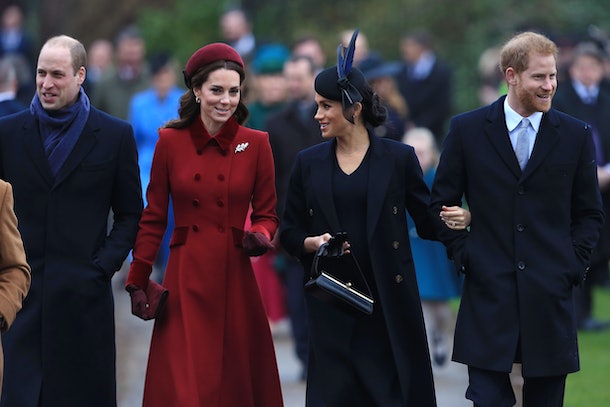 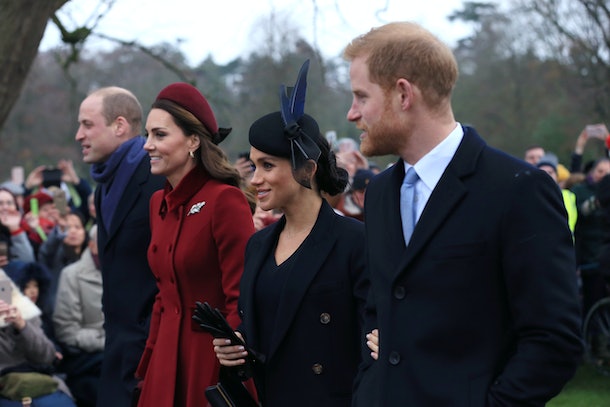 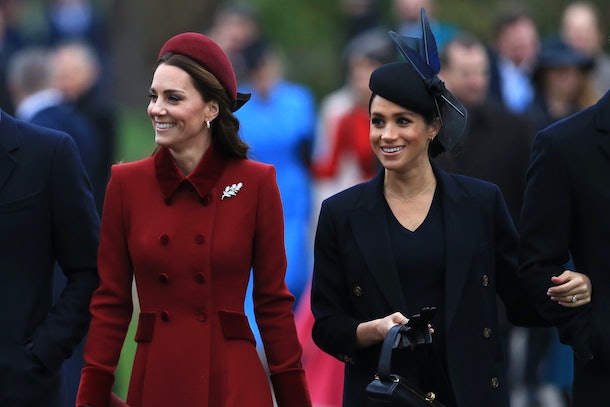 See? Everything is fine.

If you need further proof, here is the video of Meghan Markle lightly touching Kate Middleton’s back as they walk together. Fans love anything that resembles normal, everyday affection from the royal family, and this small gesture is a great example.

Both women can be seen carrying bouquets of flowers while Meghan slows down just before crossing into a gate. She waits for Kate to catch up and lightly escorts her sister-in-law inside the gated area. It’s a small moment, but still very, very sweet and tender.

Perhaps the video wouldn’t cause so much of an emotional scene if it wasn’t for all of the negative press floating around. Reports have claimed Meghan and Kate are actually at odds behind palace doors despite statements from Kensington Palace stating the opposite. For example, The Sun reported Kate was upset with Meghan for treating her staff poorly at some point. However, a Kensington Palace spokesperson said that simply "never happened." Additionally, the young royal couples ended up spending Christmas together in Sandringham after rumors suggested they may be splitting up for the holidays.

Meanwhile, Meghan’s father Thomas Markle Jr. won’t stop talking negatively about his daughter to the press. In fact, a source told Vanity Fair his actions are also causing tension between Meghan and the royal family, and most specifically, the Queen. According to the insider, the matriarch wants Meghan to be more direct in handling her father while she prefers to take a hands-off route. Meghan has made it clear she will not be acknowledging her family’s behavior, which might be rubbing the Queen the wrong way. The insider said, "There was a lot of tension between courtiers within the two royal households, and I think it just got to a point where it was stalemate and, you know, neither could move." Elite Daily reached out to the Palace previously for comment on this report, but did not hear back by the time of publication.

Luckily, these Christmas photos offer a nice respite from all of the drama. Hopefully, it’s all water under the bridge (or fake news in the tabloids) and everyone including Kate and Meghan had a very merry Christmas!