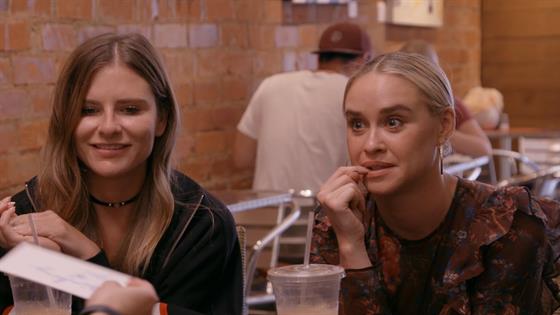 Becca Tobin and Jac Vanek probably can’t unsee the one they very literally come face-to-face with in this staggering clip from Sunday’s new LADYGANG. The video opens on both ladies (sans Keltie Knight, who might be disappointed she sat this one out) during a sit-down chat with Marina, a woman who knows firsthand there’s more than one way to spice up a long-distance relationship. When your partner is incarcerated, it requires some creativity.

“One of the guys, his name is Terrance,” says Marina, after explaining that she’s had several relationships with men behind bars and knew “a few” of them beforehand, Terrance included. “There’s a couple of things that he sent me,” she continues, “I’m super embarrassed to even show them, but you guys open it.”

With that, the LADYGANG guest passes what looks like a DIY greeting card to Jac, who’s sitting across the table.

“So, he made this himself?” she asks, noting the hand-drawn lettering that reads “Thinking of you…” on the cover page. When Marina replies “correct,” it’s clear she knows something her hosts don’t.

Moments later, all three women are in on the joke. Jac flips open the card to reveal a sexually explicit pop-up sketch that illustrates—in graphic detail—exactly what Marina’s boo was “thinking of” when he designed the card in the first place.

Check out Marina’s two-dimensional sex letter in the clip above! And don’t be surprised if you react just like the LADYGANG.

Watch a brand new episode of LADYGANG Sunday at 11 p.m., only on E!