Thrifty bride reveals how she SAVED £20K on her dream wedding by serving Oreos instead of cake, using Groupon vouchers to buy wine and holding the reception at a racecourse

A thrifty bride has revealed how she shaved £20,000 off the cost of her wedding by cashing in vouchers, using artificial flowers and tying the knot on a racecourse.

Katie Watkins, 29, and her husband Luke, from South Wales, knew they wanted to keep costs for their nuptials below £10,000 so they could save up to buy their own home.

The blogger, who writes under the moniker Katie Saves, told FEMAIL: ‘We didn’t do everything on a shoestring budget, we wanted to compromise and didn’t waste money on things we wanted to have because we were expected to.

‘We were happy, we got a lot for our money with the photographer and everything else. I don’t think I was missing out on anything by not paying more.’ 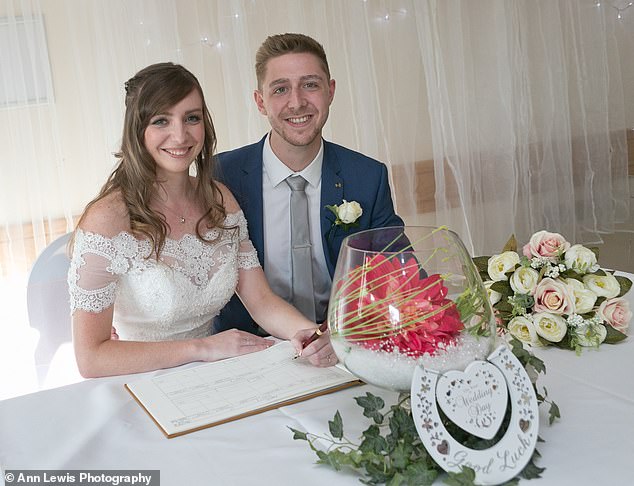 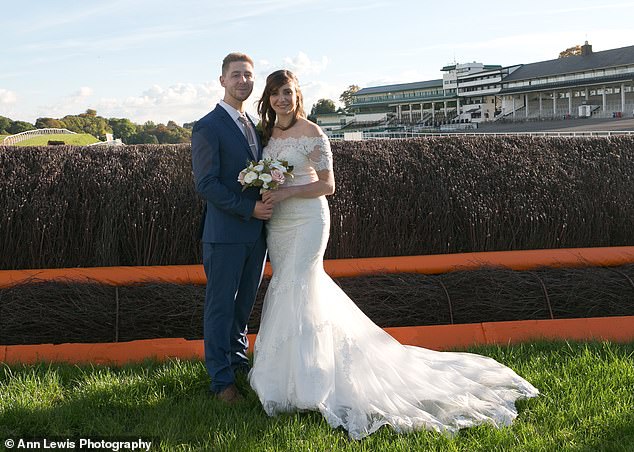 Instead of the expensive country house venue Katie originally wanted, the pair chose to wed at Chepstow racecourse in Monmouthshire

Artificial flowers including the bouquet – £180.31

Gifts for bridesmaids, grooms, and parents – £145

Katie, who works as a financial assistant, kept track of her day-to-day spending in one spreadsheet and her wedding budget in another.

The 29-year-old kept all her receipts and updated her budget weekly, and kept a physical diary as well.

To save up for the big day, she and her husband stopped eating out for dinner and started taking packed lunches into work, and decided against taking any more city breaks.

The short term sacrifices meant that the pair got married in October 2016 – less than a year after Luke proposed.

And just six months later, the newlyweds managed to buy their own home – before having a daughter together, Elise, who just turned one.

Here, she shares with FEMAIL her top tips for cutting costs on your own special day…

Katie originally wanted to get married in a beautiful country house, but the one she was considering charged £6,000 for just 30 guests.

Instead the pair bucked tradition by getting married on a racecourse – cutting costs considerably, without losing out on the fun.

She said: ‘It was just so different, it wasn’t like every wedding you go to, it was just totally different. I think I would have regretted it more [if I had chosen the country house]. We just wanted to enjoy it with our guests.’ 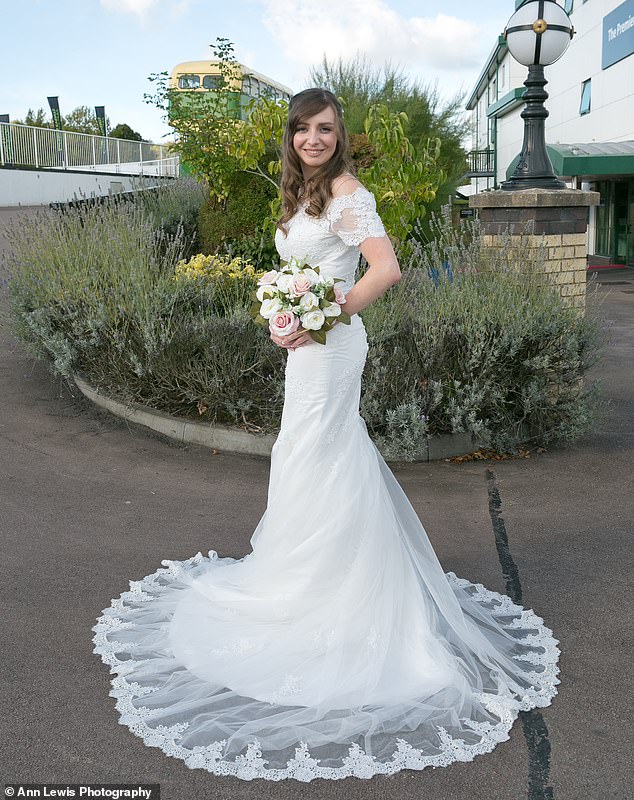 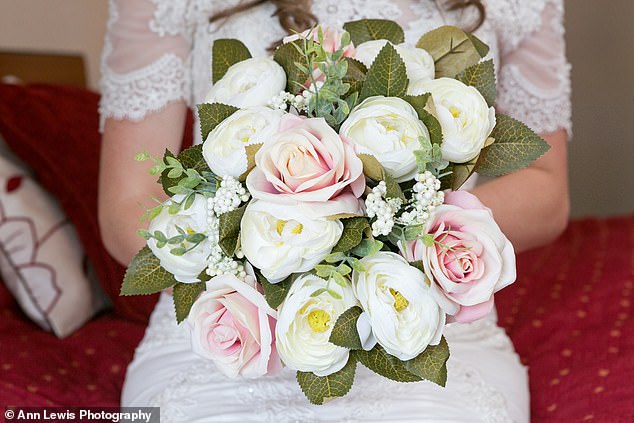 Katie didn’t want to splash out on flowers that wouldn’t last – so she bought artificial ones, including her bouquet, which she ordered on Facebook (pictured)

Many brides consider fresh flowers to be a must at their weddings, but for something that isn’t going to last it’s an easy expense to cut.

Instead of ordering from a florist, Katie bought artificial flowers from The Range and four rose trees from Home Bargains which she decorated with battery-operated fairy lights.

For the bouquet and buttonholes, she turned to Facebook where she found someone who specialised in creating them from artificial flowers – and got plenty of compliments on the day.

She added: ‘I didn’t particularly want flowers, they’re lovely on the day but what do you do with them after the wedding?’

Neither Katie or Luke particularly enjoy cake, so they decided against forking out £300 for something they wouldn’t eat themselves.

Instead they bought packs of Oreos and a cake stand, sticking it all together with icing and serving it up with milk bottles. 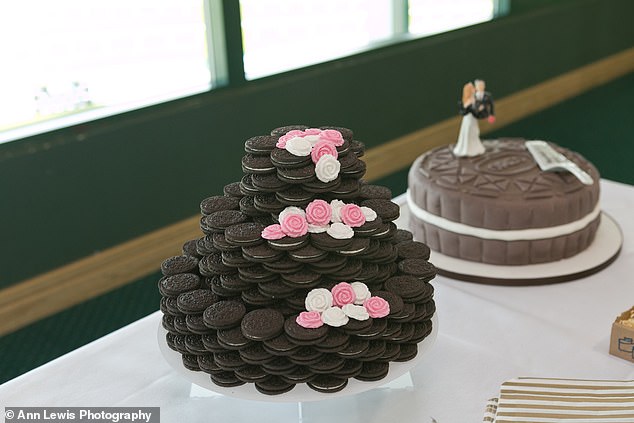 Katie and Luke don’t particularly like cake – so they saved the £300 they might have spent on one and bought Oreo cookies and a cake stand instead. It cost them just £10 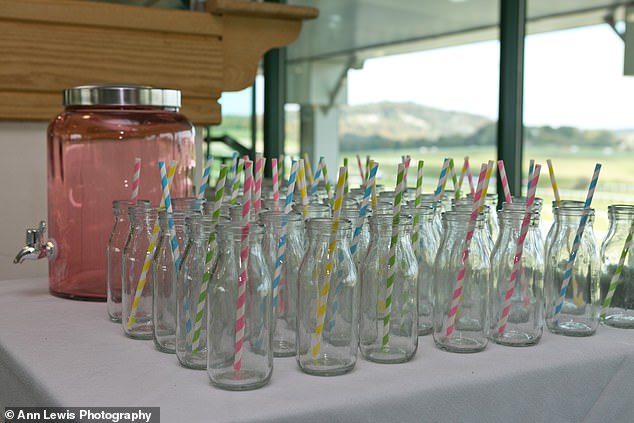 They served up their ‘cake’ with milk for the guests in sweet glass bottles and striped straws. The couple were keen to keep costs as low as possible so that they could buy their own home

Although Katie originally tried a bridal boutique for her dress, she wasn’t sure about any of them and ended up going to a bridal outlet.

She immediately fell in love with a £600 dress – half the price of the one she had been considering before. She bought it off the hanger, and didn’t even need any alterations.

Chepstow Racecourse wanted £25 for a bottle of wine on each of the tables, but Katie managed to save some serious cash by shopping around. 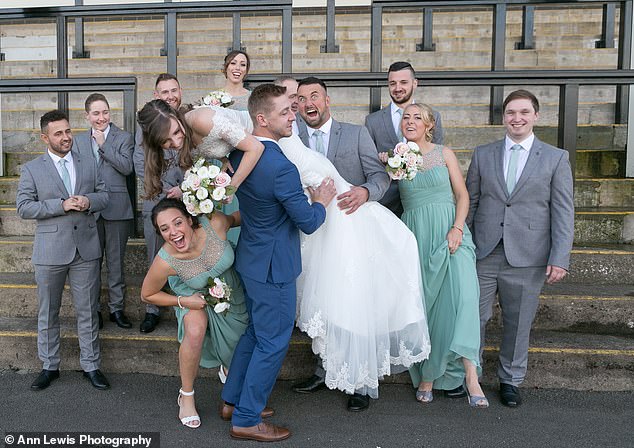 The financial assistant snapped up a deal at Burton which meant she got a suit and a pair of shoes for £99, and then put the total on a store card which saved her another 20 per cent

For those wanting to save even more money, skipping out on buying outfits for those in your wedding party is an obvious solution.

But if you do decide to splash out, Katie advises you head to the high street rather than a bridal boutique.

She bought nine suits from Burton, who were doing a deal where you buy a suit and get a pair of shoes for just £99.

The thrifty bride then signed up for the store card, saving herself another 20 per cent – which worked out at nearly £180. 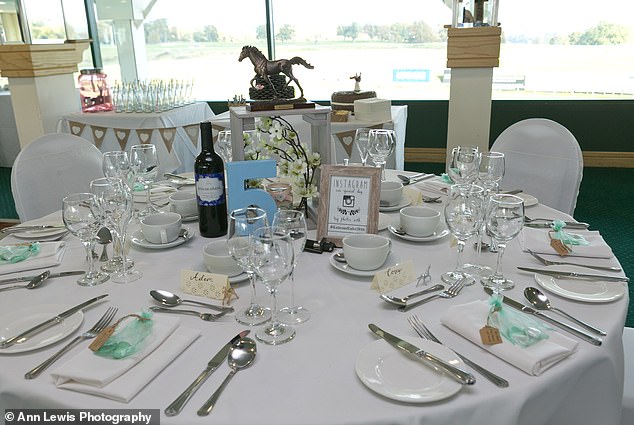 They decorated the venue themselves, which photo frames bought from The Range, and flowers from Home Bargains 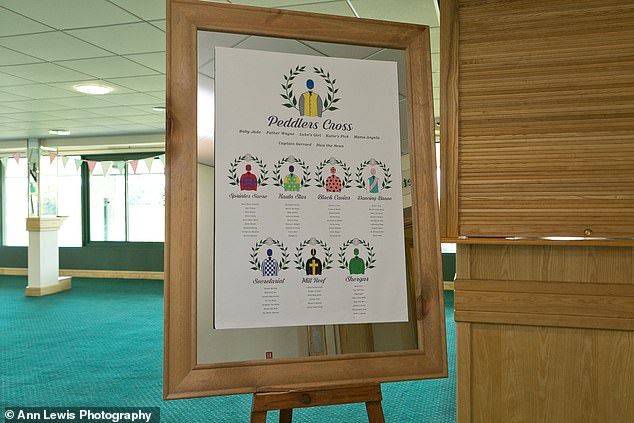 They also created the seating charts themselves, creating a nickname for each of their guests using the names of horses

She then bought her three bridesmaids dresses from Very, using a buy now pay later service, paying them slowly off as the big day approached.

Another tip she recommends is searching for discount codes on everything and using up vouchers.

Katie and Luke created all the stationery at the wedding themselves – from the invites, to the name cards and seating chart.

As the wedding was race card themed, the pair had a great deal of fun coming up with nicknames for all of their guests using real horse names.

Katie added: ‘If you can do things cheaper yourselves you should, and you should definitely question packages venues offer you.’