Tom J. Cade, an ornithologist who was a leader of a remarkable effort that re-established the majestic peregrine falcon on the East Coast after the pesticide DDT had wiped it out there, died on Feb. 6 in Boise, Idaho. He was 91.

The Peregrine Fund, a conservation organization he helped found, announced his death.

Dr. Cade was director of the ornithology laboratory at Cornell University in the late 1960s when he and others began contemplating how to help the endangered peregrine falcon. The bird had disappeared from the East Coast and was struggling elsewhere in the United States because use of DDT had had the unintended effect of weakening the shells of its eggs.

Dr. Cade rallied falconers, conservationists, universities, businesses and more to join in trying to reintroduce the bird in areas where it had once thrived. But that required overcoming all sorts of obstacles, including how to breed birds in captivity and how to acclimate them to life in the wild.

By the early 1970s Dr. Cade and associates had successfully bred peregrine falcons in captivity, and by 1980 falcons released in the East had reproduced in the wild.

The birds took a particular liking to New York City and other urban areas — partly, perhaps, because the tall buildings were reminiscent of the cliffs their ancestors had nested in, and partly because pigeons and other urban creatures provided an abundant source of food for these raptors.

In 1991 The New York Times reported that 10 adult pairs were nesting in the city in places that included a ledge outside New York Hospital-Cornell Medical Center and the tower of the Cathedral Church of St. John the Divine.

The effort was so successful that in 1999 the federal government removed peregrines from the endangered species list.

“The message here,” the secretary of the interior, Bruce Babbitt, said at the time, “is that the Endangered Species Act works.”

The Peregrine Fund, started in 1970, has expanded on Dr. Cade’s original vision to provide support and protection for many kinds of raptors in the United States and beyond. 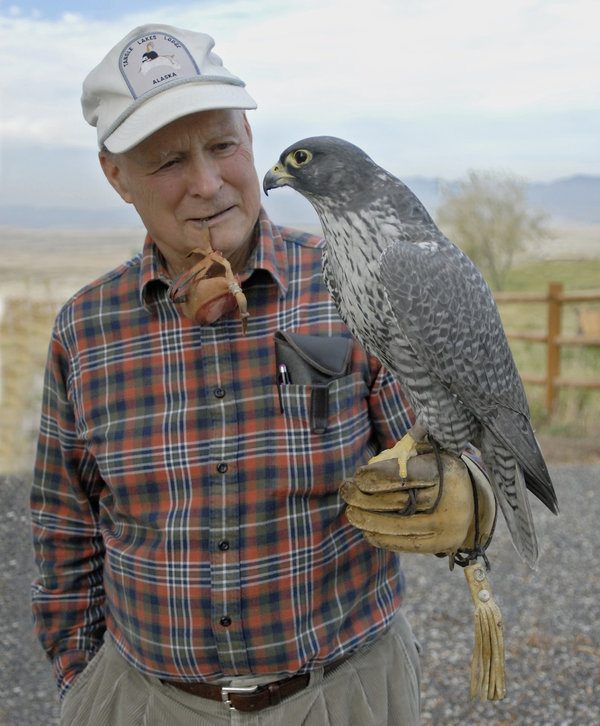 “His reach extended around the globe,” Rick Watson, the fund’s president and chief executive, said in a news release, “to inspire raptor research and conservation on virtually every continent and on behalf of hundreds of species.”

Dr. Cade was also a falconer; he became interested in that sport when he read a National Geographic article about it in the 1930s. The interest became an infatuation when, at 15, he was hiking with a friend at the San Dimas Reservoir in Southern California and a peregrine zoomed by.

“It whistled over our heads” on its way to plucking a coot off the water for a meal, he told The Morning Call of Allentown, Pa., in 2008. “It sounded like an artillery shell passing over us. It caught our attention.”

After serving in the Army in 1946 and 1947, he studied peregrines at the University of Alaska, where he received a bachelor’s degree in biology in 1951. The next year he married Renetta Mae Bennewater.

He earned a master’s degree at the University of California, Los Angeles, in 1955 and his Ph.D. there in 1957.

He first began experimenting with breeding the American kestrel and peregrines after joining the faculty at Syracuse University. When Cornell, in Ithaca, N.Y., recruited him in 1967, his condition for accepting a job there was that the university build him a bird breeding barn.

As Dr. Cade began to look at breeding peregrines in captivity, one problem he encountered was that their mating rituals involved acrobatic courtship flights. Another researcher, Heinz K. Meng, at the State University of New York at New Paltz, succeeded in breeding a pair in 1971, then lent the birds to Dr. Cade. Those birds and two other pairs produced 20 young falcons for Dr. Cade’s team in 1973.

Meanwhile Dr. Cade, with Frank Bond, Bob Berry and Jim Weaver, had started the Peregrine Fund, which has since worked on helping scores of species in 65 countries. He was the organization’s founding chairman. In the mid-1980s the fund relocated to the newly built World Center for Birds of Prey in Boise, and Dr. Cade finished his career at Boise State University, retiring in 1993.

In addition to his wife, his survivors include five children, Marla Jo, Brian, Cheryl, Thomas Alan and Ernest Drew.

In a 1980 interview with The Times, Dr. Cade gave a simple explanation for his lifelong mission.

“No one who sees a peregrine falcon fly,” he said, “can ever forget the beauty and thrill of that flight.”