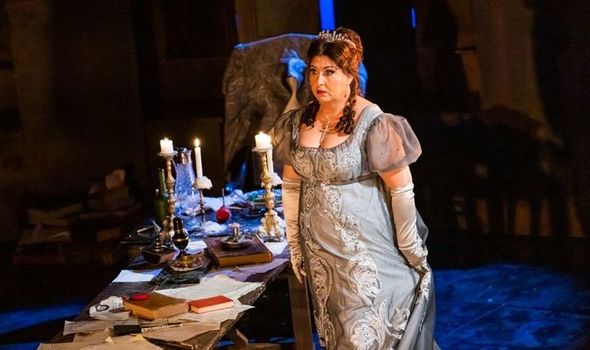 By the time of the third performance, which was the one I saw, the singers, orchestra and technical staff must have been wondering what else could go wrong, but the audience were given a real treat.

There are three main characters in this opera: Floria Tosca is an opera singer; the painter Mario Cavaradossi is her lover; and Baron Scarpia is the chief of police and the most despicable villain in all opera. Scarpia has long lusted after Tosca, so seethes with envy and hatred for Cavaradossi, whose politics he also despises. When a political prisoner escapes, Scarpia sees his chance: he arrests Cavaradossi whom he rightly suspects of helping the escapee, lets Tosca hear his cries when he is tortured, then tells her that she can save him only by letting Scarpia have his evil way with her.

As George Bernard Shaw once said, “Opera is when a tenor and soprano want to make love, but are prevented from doing so by a baritone,” and there cannot be a more dramatic version of that than Tosca. What it needs, though, is three great singer-actors for the leading roles and that is exactly what we saw this time at the Royal Opera House.

Freddie Tomasso was in fine voice as Cavaradossi and acted convincingly both in his romantic scenes with Tosca and as a noble victim of the evil Scarpia. The Italian soprano Anna Pirozzi had been highly impressive as Lady Macbeth in Verdi’s opera at the ROH a few weeks ago and was equally stunning in the title role of Tosca. Her volume control is astounding and when turned up full on the highest notes produces a shattering effect. She also made the most of the few moments of humour in this opera, with just the slightest of gestures getting appreciative laughs from the audience.

Always, however, the most important part in this opera is that of Scarpia, and Italian baritone Claudio Sgura brought true villainry to the role. Tall and dark, he really looked the part, and quite apart from his powerful singing, he moved with an impressive swagger which emphasized his character.

With these three dominating the stage, it was an added bonus to see the English bass Jeremy White bringing his great experience to the role of the Sacristan in the church where the early action takes place, and Ukrainian baritone Yuri Yurchuk as Angelotti, the escaped prisoner. Both played their parts very convincingly adding even greater conviction to the performance.

This is the eleventh revival of Jonathan Kent’s glorious production of Tosca which was first seen in 2006 and thanks to all these excellent performances looked as good and fresh as ever. The sets are splendid, ranging from sumptuous to sparse, with some delightfully thoughtful touches.

With the orchestra holding everything together in magnificent style under the young Ukrainian conductor Oksana Lyniv, this all added up to a perfect performance of a superb production of a great opera. Considering the problems the Royal Opera has faced for the past two years, this was a magnificent achievement.