Labor has to get “tougher, stronger, hungrier” if it is to have any chance of taking government back from the Coalition, with opposition frontbencher Ed Husic warning his colleagues they can’t play too nice after three election losses in a row.

In a speech to party faithful that marks something of an intervention for caucus members who are pushing to release more policies now, the MP says there’s no point in producing ideas for the government to steal and take credit for when the election rolls around. 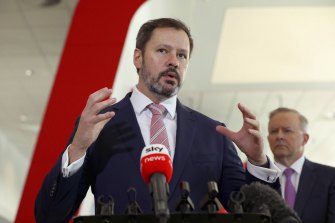 Labor frontbencher Ed Husic is warning his colleagues the opposition needs to be tough and hungry to win government.Credit:Dominic Lorrimer

And Mr Husic, who has represented the western Sydney seat of Chifley for more than a decade, cautions that Labor cannot take voters in the region for granted.

“There are more federal seats in our region than there are in a lot of states… We’ve always got to repay the faith in practical, meaningful ways,” he will say in the Jack Ferguson Memorial Lecture address on Saturday, hosted by the ALP Westmead branch.

The election is due to be held by May 2022. The opposition holds a swathe of seats through western Sydney’s suburbs but many are marginal. The Liberals will be seeking to hold on to Lindsay and Reid, both with margins under five points.

“Our job is not to play nice or give an inch as we build the plank to walk off this awful, inept, chaotic Morrison government,” Mr Husic says.

However, Labor sees its bigger challenge as potentially coming from other conservative parties such as Clive Palmer’s United Australia Party, spearheaded by Liberal turncoat Craig Kelly whose seat of Hughes takes in Liverpool.

Nevertheless, Mr Husic warns the opposition must be ready to fight hard against the government and prove it’s learned the lessons from the 2019 election loss.

“This election is up for grabs but we will have to fight hard to grab government out of the fists of a Liberal Party that will do and say whatever they can to win. [Labor needs to be] tougher, stronger, hungrier. Determined to make a difference for the people that matter and count on us to succeed,” he says.

One of the key findings from the 2019 campaign review by ALP elders Craig Emerson and Jay Weatherill was that its more than 250 policies and $100 billion in spending announcements overwhelmed voters and candidates and the party should return to its core values.

Opposition Leader Anthony Albanese has so far released just a handful of policies, including on childcare subsidies, locally manufacturing trains, and a comprehensive upgrade of the nation’s electricity network. During his party room address in Canberra last week, he thanked caucus colleagues for recognising Labor wouldn’t release its climate policy ahead of the UN summit in Glasgow, despite pressure to do so.

Mr Husic urges his colleagues to remember the 2019 loss and “without blinking” stick to the plan to release the bulk of the policies during the campaign proper.

“Some will say my prescription is too negative, we need to pump out positive policies to contrast the government,” he says.

“Why right now? So they can steal the ones they like, and beat us over the head with ones they don’t? No, thank you.

“We’ve lost three elections on the trot now and after every loss the same people who lectured us about being positive, tell us that, ‘Oppositions don’t win elections, governments lose them’.”

It’s the second time a NSW Right figure has used the Ferguson address to emphasise the importance of suburbia to Labor’s push to win back power. Chris Bowen warned last year that if Labor forgot the suburbs, it could win every vote in inner-city areas and still fall short.

The western suburbs have been devastated by the delta wave of COVID-19 through Sydney and Mr Husic says people feel abandoned by Liberals at state and federal levels.

He sees it as “utterly devastating and disappointing” class warfare: “We’re locked down, treated like we’re responsible for the Bondi cluster. Made to jump through testing and vaccination hoops just to leave our local government areas to make a living.”

Mr Husic says the Liberal brand is on the nose and the state executive isn’t endorsing candidates for several coming local council elections in the region.