Elton John’s globetrotting farewell tour will return to Australia next January for encore shows in Melbourne, Sydney and Brisbane, and his first-ever performance in Newcastle. 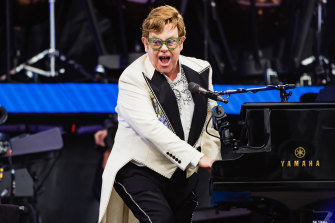 His original run of more than 30 farewell shows in Australia took place from late 2019 until March of 2020, wrapping up just days before the COVID-19 pandemic halted international touring.

The glittering, worldwide swansong has now unexpectedly been extended for Australian fans, who might have missed the chance to kick up their heels with Crocodile Rock and sing along to Candle in the Wind the last time Sir Elton was here.

The multiple Grammy Award-winner’s upcoming Melbourne and Sydney shows will take place almost 52 years since he first played in Australia, and his last time on stage in Brisbane will be his 233rd and final Australian performance – at least for now.

After a career spanning six decades, he is retiring from touring to spend more time with his family.

“It’s quite incredible, really … it’s wonderful to have him coming back for these shows.”

Michael Chugg, who is promoting the tour with Frontier Touring and AEG Presents, recalls seeing John’s maiden Australian tour and has “cut a few birthday cakes” with the veteran entertainer.

The year before releasing his chart-topping song Rocket Man in 1972, John played his first Australian show at Kooyong, and a week later played at Randwick Racecourse in Sydney. In between, he played at Festival Hall in Brisbane.

“I saw him play at Randwick Racecourse, and I had [New Zealand band] the La De Da’s on that ’71 tour as well, they were supporting him,” Chugg said.

The farewell tour will end with a show at Dodger Stadium in Los Angeles in November next year.

“It’s quite incredible, really … it’s wonderful to have him coming back for these shows,” Chugg said. “It’s going to be fun, and we’re looking forward to it.”