Olympian Nova Peris has warned Australia's Indigenous communities could turn their back on the Aboriginal flag and create a new symbol unless the federal government intervenes to seize the copyright.

The former athlete, who also served one term as a Labor senator, has told a Senate inquiry into the flag it should be "compulsory acquired" as "a matter of national emergency" amid growing legal battles over its use. 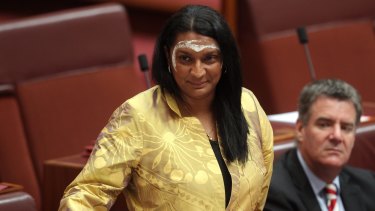 Olympian Nova Peris in the Senate after she was elected to the upper house in 2013.Credit:Alex Ellinghausen

Ms Peris has become a leading voice in the Free The Flag movement after national sporting codes and indigenous community groups were issues cease and desist letters on behalf of WAM Clothing, an Australian company with an exclusive worldwide licence for the use of the flag on apparel.

The National Indigenous Australians Agency has entered into discussions with the flag’s designer, Luritja artist Harold Thomas, and licensees in a bid to allow the design to be used freely.

Ms Peris, the first Aboriginal Australian to win an Olympic gold medal, told a Senate inquiry the complexity surrounding the use of the flag and lack of understanding of "what is or is not allowed" had led to great anxiety for the Aboriginal community.

"This has had the unintended consequence of a creating a significant decrease in the visibility and availability of Aboriginal flag products," she wrote in her submission.

"It has also meant that for the first time since the early 1970s, that Aboriginal people are electing to not use the flag, starting conversations about designing a new flag.

"This is unprecedented in my lifetime. It speaks to the fact that Aboriginal people identify with the history of this symbol – as a mix of pride and resistance and our shared history. But they are now in distress and seeking a new way forward.

A number of Coalition MPs have voice their support in the Commonwealth paying a "fair and reasonable" price to Mr Thomas to buy out the copyright and compensate its licensees.

Ms Peris said it would be "a great shame" for a new flag to be required based on a failure to resolve this complex issue.

"I do believe the community will turn its back on the existing design and move to create a new symbol that represents the freedom, identity and survival of us Aboriginal peoples."

She said the current licence agreements should be paid out by the taxpayer.

"Mr Thomas has been paid significantly previously by the Australian taxpayer and I do not believe that WAM and [fellow licensee] Gifts Mate should be compensated for this acquisition," Ms Peris writes in her submission.

Ms Peris is scheduled to appear before a Senate inquiry into the long-running dispute over the use of the flag on Thursday along with former Aboriginal and Torres Strait Islander Social Justice Commissioner Mick Gooda and leading Indigenous academic Marcia Langton.

She said WAM was the exclusive licensee for a range of clothing and apparel, towels, and digital and physical media products featuring the flag, pursuant to licence agreements granted by Thomas, for "an agreed period of time".

It has previously said it was not stopping Aboriginal people or the community from using the flag for personal use but when it was used on clothing for commercial reproduction "then we need to talk".