A German warship will visit Australia’s shores in October before sailing through the South China Sea to reinforce its call for international law to be upheld in the disputed waterway.

Germany announced on Monday that one of its frigates, the Bayern, and its 230 crew members had left the port of Wilhelmshaven for a months-long trip through the Indo-Pacific. It will make port visits in Australia, Guam, Japan, China, Singapore, India and on the east coast of Africa. 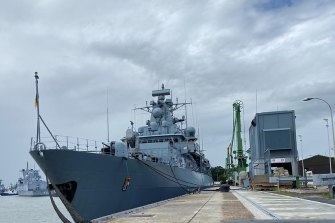 The German frigate Bayern will visit Australian shores in October.Credit:Bundeswehr

The ship is expected to make a port visit to Perth in October before sailing through the South China Sea as anxiety increases about China’s expansion in the waterway.

Considering the voyage involves just one frigate and it is also making a stop in Shanghai, it is not expected to antagonise Beijing in the same way as recent British and French voyages through the South China Sea.

Beijing this week launched multiple naval drills in the South China Sea in response to Britain’s aircraft carrier HMS Queen Elizabeth entering the waterway, branding the ship’s visit “colonial” and warning it was intruding on Chinese territory and could be “expelled”. Australia is also sending ships to join the British-led carrier strike group.

The German frigate is sailing through the region later this year partly to reinforce its position that the UN Convention on the Law of the Sea (UNCLOS) should be upheld in disputes over the South China Sea.

The Bayern will also help monitor sanctions against North Korea – such as a ban on shipments of oil and refined petroleum products – as part of an international effort to get the rogue nation to abandon its nuclear and missile program. It will carry out sea surveillance to prevent the sanctions from being circumvented by cargo transfers on the high seas.

In a strong signal that the European power wanted to be more active in the region, German Foreign Minister Heiko Maas said the Indo-Pacific region was “where the international order of the future will be decided”.

“We want to help shape it and to take on responsibility for upholding the rules‑based international order,” he said.

“This is why we are helping to monitor the UN sanctions against North Korea and expanding our partnerships and our involvement in the region, including through the EU’s strategic partnership with ASEAN and consultations on security policy with Japan and Australia.”

Rory Medcalf, head of the National Security College at the Australian National University, said the German frigate’s visit was a “valuable signal” but the country was still being careful not to antagonise Beijing.

“Visiting a Chinese port suggests a higher degree of caution and hedging than the British or French,” he said. “The UK carrier strike group’s visit is a major signal and the French have already been doing this for several years. So Britain and Germany are really following what France initiated.

“The bigger context is that Europe is seriously pivoting to the Indo-Pacific so this is part of a wider trend of global powers discovering the importance of being present in the region.”

The Royal Australian Navy welcomed the German frigate’s upcoming visit, posting on Twitter that it looked forward to seeing the ship later in the year. “Fair winds and following seas to @deutschemarine frigate #Bayern as she sails today from Wilhelmshaven in Germany.”