More than 4.5 million voters could be spared voting in council elections in October, with the Victorian government strongly considering postponing the polls amid tough COVID-19 restrictions across the state.

It comes after Local Government Victoria updated its guidelines on Wednesday for candidates to safely campaign, on the advice of Chief Health Officer Brett Sutton. 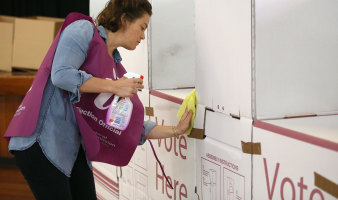 Voting during COVID-19: An election official sanitising a polling booth during the Brisbane council elections in March.Credit:Getty Images

Under those revised guidelines, candidates in metropolitan Melbourne would effectively be banned from campaigning outside their homes, including doorknocking, leafleting, attending campaign events and advertising on billboards and posters, for as long as stage four restrictions remain in place.

They would have been allowed to drop election material into people's letterboxes, hand out leaflets and advertise on posters and billboards.

The October poll was set to be the state's biggest election yet, with more than 4.5 million voters enrolled (including business owners in the City of Melbourne) and more than 2000 candidates expected to contest 76 of Victoria’s 79 councils.

It would be Victoria's first statewide council postal ballot, a concession announced by former local government minister Adem Somyurek in May to assuage rising concerns about the risks of conducting the elections amid the pandemic.

The Andrews government has for months resisted pressure to delay the polls, maintaining Victorians have a democratic right to vote.

But it is understood that after the revised guidelines were issued, it became clear that candidates would have been unable to campaign in any meaningful sense, and consideration has shifted to postponing the elections.

Local Government Minister Shaun Leane has been contacted for comment.

The Local Government Act gives him the power to delay the election during a state of disaster.

Victorian Labor had been preparing a concerted push to regain dominance in grassroots politics, after formally resolving in 2018 to vigorously contest future council elections.

But councillors across the state have raised concerns that if the October elections gone ahead, they would heavily favour incumbents who already have a profile and cash-rich candidates who could afford to campaign through letterbox drops using postal services.

Stonnington mayor Steve Stefanopoulos said without the ability to campaign in person, it would cost between $14,000 and $16,000 to letterbox his ward – a financial impossibility without a major party to back him.

Municipal Association of Victoria president Coral Ross said it would be impossible to have free and fair elections with Victoria in a state of disaster.

Cr Ross, a councillor in the City of Boroondara,said many would-be council candidates had already dropped out, including women with dependent children, people who had lost work and business owners struggling to stay afloat.

There were more than 2100 candidates at the last election, with about 10 volunteer supporters each, and the MAV had argued for months that with so many people involved in the election it would be dangerous to proceed.

"It's not something that you would call for lightly. It's just that this is only the second time that we've had a state of disaster and it's the first time ever that we've got curfews. These are not normal times."

"The community at the moment is more worried about their health, their safety, their jobs – the first candidate to go outside and say, 'vote for me' is going to get pummelled by the community."

Darebin mayor Susan Rennie said her council had budgeted $1 million to carry out the election, which would be better spent on supporting the community through the pandemic.

"We have a number of staff at the moment working on councillor orientation and induction packages and activities, and all of those staff could be redirected into COVID-19 recovery," Cr Rennie said.