Voters in the formerly blue-ribbon Liberal seat of Warringah want a plan for Australia to get to net zero carbon emissions, party figures said on Tuesday while launching a campaign office to help win back the seat at the next election.

Liberal senator Andrew Bragg will work at the Balgowlah office two days a week when Parliament is not sitting. The party-funded office was opened Tuesday morning by a slew of "moderate" Liberals including Senator Bragg, Foreign Minister Marise Payne and state MPs James Griffin, Felicity Wilson and Natalie Ward.

The party has not selected a candidate to take on independent MP Zali Steggall, who dramatically ousted former prime minister Tony Abbott from the seat in 2019 with an 18 per cent swing, largely on a platform of taking action on climate change.

Senator Payne said the candidate must be someone who "represents Liberal values and represents Warringah, obviously, in their presentation". She said Warringah voters wanted a clear plan to achieve that goal, not just a target.

"It is one thing to create a target, a nominal target, without a plan," she told the Herald. "It's another thing altogether to have a target with a proper plan, and that's what we will do."

Senator Payne said the government was in a strong position to meet and beat its Kyoto targets and "then to have ambition for zero emissions in the second half of the century". She disagreed with the suggestion Australia was “snubbed” from a recent climate summit co-hosted by the United Nations, United Kingdom and France.

"I don't accept that premise," she said. "There are a number of countries that might be regarded as being in one category or another that were not included in that summit."

The party has also opened a "winning back Warringah" fundraising raffle to be drawn in February. The top prizes are a surfing lesson and breakfast with Mr Abbott (estimated value $2500), a tour of Taronga Zoo tour with NSW Environment Minister Matt Kean, a beer-tasting session with Mr Griffin and a morning tea with broadcaster Alan Jones.

Senator Bragg, who is the Liberals' campaign duty senator for Warringah, insisted he was not interested in running for the lower house seat himself. "No, I [already] have a seat," he said.

He agreed it was not feasible to select a candidate "on the fence" on climate change. He said the government now "needed to do the work" to formulate a plan to get to net zero emissions, to be outlined before the Glasgow climate talks in November 2021.

A surf lesson and breakfast with Mr Abbott is being offered as a raffle prize. Credit:Sydney Morning Herald

"I know that's going to be important here in Warringah, here in the northern beaches," he said.

Senator Bragg said the Liberal candidate for Warringah would "be able to deliver something for the electorate", as opposed to Ms Steggall, who was "totally impotent" as an independent MP.

However, Ms Steggall said it was "actually the complete opposite". "Backbenchers who talk a big game on climate are never capable of delivering because they're never courageous enough to cross the floor and stand up to the dinosaurs in their party," she said. 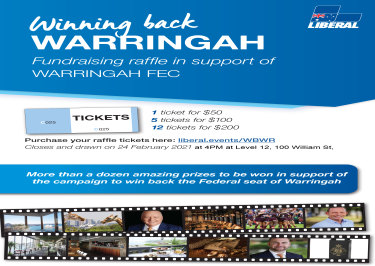 "As an independent, I can listen to constituents, take their concerns to Parliament and follow up on them. I can ask the Prime Minister directly in question time. No one hands me a dorothy dixer to ask a minister."