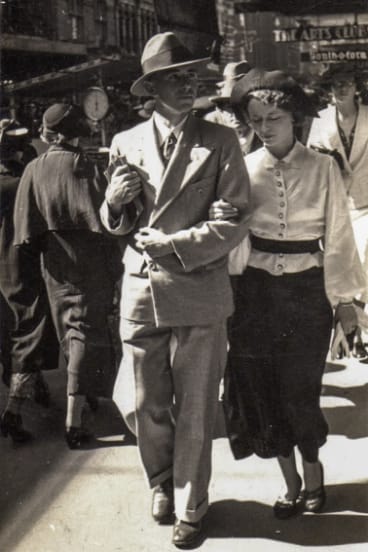 Earle and Nancy Waterhouse outside the courthouse on Pitt Street in 1930. The couple met in Ballina, where Earle was working as a teacher at the school where Nancy’s father was headmaster.

Her latest project, Street Photography, is about all of those things. It’s about lost moments in time, a lost profession, lost customs and lost film. Yet this time it’s also a case of lost and found.

Inspired by a portrait of her mother Hedy “looking radiant and happy” on the streets of Prague in 1947 – taken less than a year before she would have to flee the city following the Communist coup – Zahalka turned her eye to Australia’s rich history of street photography.

Street photographers were a constant presence in Sydney from the Depression through to the postwar years.
Armed with 35mm cameras, they would snap their subjects quickly – often while they were unaware – then hand over a card for the customer to collect their photos from a kiosk.

Young romantic couples, women and mothers were often their favourite “marks”. With dozens of street photographers operating in Sydney on different corners on any given day, it was very competitive. 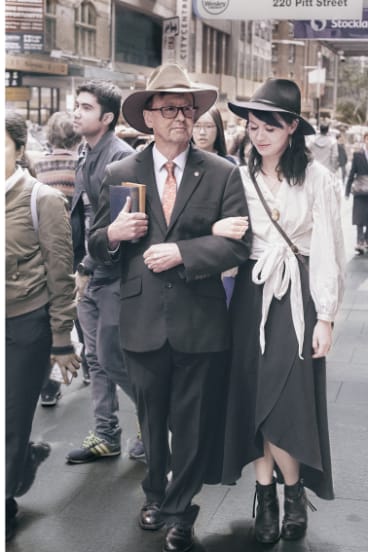 “Mostly they were amateurs,” says Zahalka. “There were a lot of returned servicemen who ended up becoming photographers. It was a way of supporting families and parents.

"They had to work very quickly. They jumped out at the people as they passed by. It was a global thing. [Street photographers] operated all around the world. There's a huge collection in San Francisco.”

By the mid-1930s 10,000 people were buying photos from street photographers each week in NSW.

“They were very popular and very affordable,” says Zahalka. “It was also very democratic in that way. Everybody could actually afford to have a picture of themselves. They were sent to servicemen overseas. And then they disappeared into albums and shoeboxes.” 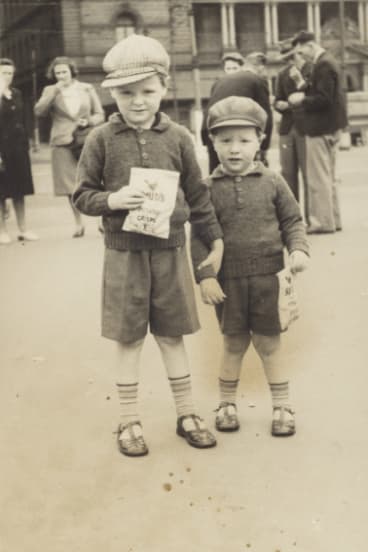 Brothers Frank and Pat Doughty at Circular Quay in 1943. Their mother sent the image to her husband who was in the Royal Australian Navy in World War II. The brothers are holding potato crisps, Spuds.

And in albums and shoeboxes they might have stayed, until Sydney Living Museums put out a public call for people to send in their photos. They received 1500 images, 250 of which have been digitised and enlarged for the exhibition.

Few rolls of street photographer film survive today – a loss for our collective memory – yet during the callout Sydney Living Museums acquired a collection of 127 rolls of film (about 5000 photos) taken in 1950 in Martin Place. They were snapped by a street photographer working for Ikon Studio, whose photos were sold via a kiosk in Her Majesty’s Arcade in Pitt Street. More than 130 of these photos are in the exhibition.

The rise of personal cameras and increasing official scorn at their nuisance factor eventually pushed the street photographers out of business by the 1950s. Yet their work lives on at the Museum of Sydney. The exhibition’s co-curator, Anna Cossu, says the photos are a wonderful record of who we were and what the city looked like.

“I have too many favourites – gorgeous frocks and fantastic photos of children awkwardly posing for the camera, trying to stand still while Mum or Dad wait just outside of camera range,” says Cossu. 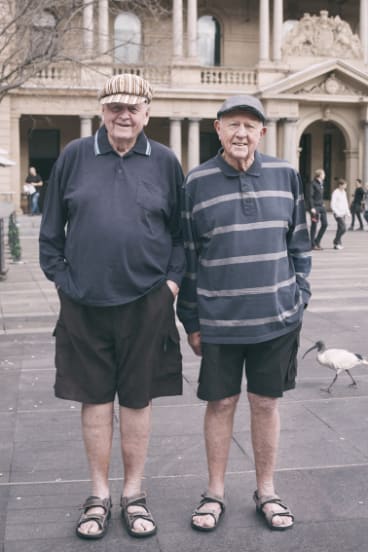 Frank and Pat Doughty recreate the image from when they were boys (minus the Spuds).Credit:Anne Zahalka

“The stories are also diverse – people on their lunch breaks or out shopping, romantic couples on their first date or honeymoon, servicemen and servicewomen smiling mid-stride on the street, some on leave before they return to the battlefields.”

Looking at the images of men in hats and well-dressed women, one feels a sense of lost formality. For instance, men don’t wear hats any more.

“They don't, and neither do women,” Zahalka says. “Or gloves. I think people dressed up so much to go to town and that's completely lost now.

“People didn't actually go to town if they couldn't dress up. It was an occasion. They were meeting with friends or it was a first date. Even with children, it was an outing. They were often given a treat. There's memories of going to Mark Foy's or department stores.” 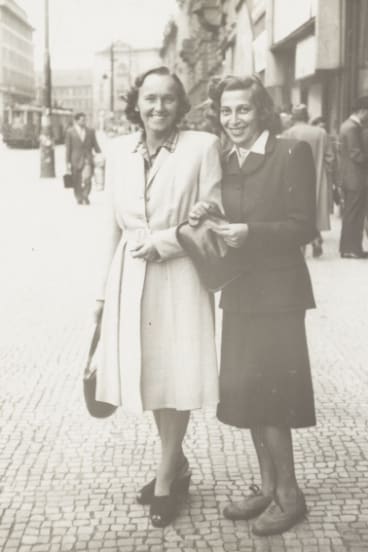 Hedy Zahalka, right, and her friend in Czechoslovakia in 1947.

“I was really taken by some images and was looking at a way of revisiting or re-imagining the descendants in that same place today and how they would look. I don't work in the way of those street photographers: I find that really confronting.

“Re-staging the original street photos was a way of connecting with the past through the descendants and those still living. While the buildings behind looked the same, the face of the city had changed. Today it is a thriving mix of ethnicities and diverse cultures that stands in stark contrast to this predominantly white photographic history.”

Zahalka says the re-enacted portraits were photographed in the same city location or as close the originals as possible. 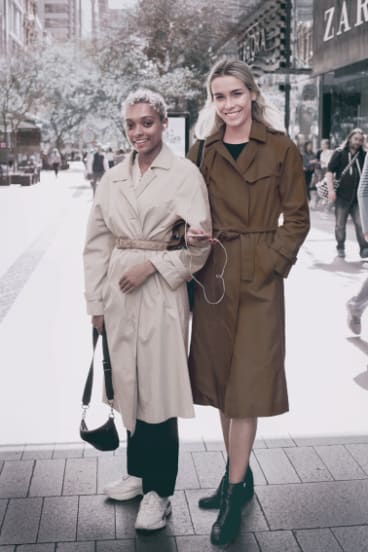 “Unlike the early street photographers who worked quickly, targeting their subjects as they came into view, I worked slowly with a tripod composing my subjects within the frame, having them appear to be walking while standing ‘still’. Others were as the originals, posed as they stopped for the photographer to take their portrait. I used a 35mm digital camera and shot in colour rather than an analog black-and-white film camera.”

One of the more compelling re-enactments is that of brothers Frank and Pat Doughty, originally photographed in 1943, potato chips in hand to eat on a ferry trip to Manly with their aunt. (Of course, in 1943, there would have been no ibis walking in the background, unlike the Sydney of today.)

“I suggested that maybe we could do it at Customs House, the site where they were originally recorded. At the time they remembered holding these chip packets and you used to be able to get salt to sprinkle on the chips.

“The original image had been sent to the father who was overseas [in the navy] during the war and said ‘here are your two darlings’.”

Another recreation, photographed in Pitt Street Mall, was closer to Zahalka’s own heart. Her daughter Alice, and Alice’s friend, Sophie Wild, re-enacted the original image that sparked the idea for the exhibition, that of Zahalka’s mother posing on the streets of Prague with a friend. (Zahalka dedicated the exhibition to the memory of her mother.) Zahalka says the Pitt Street shot was quite moving. 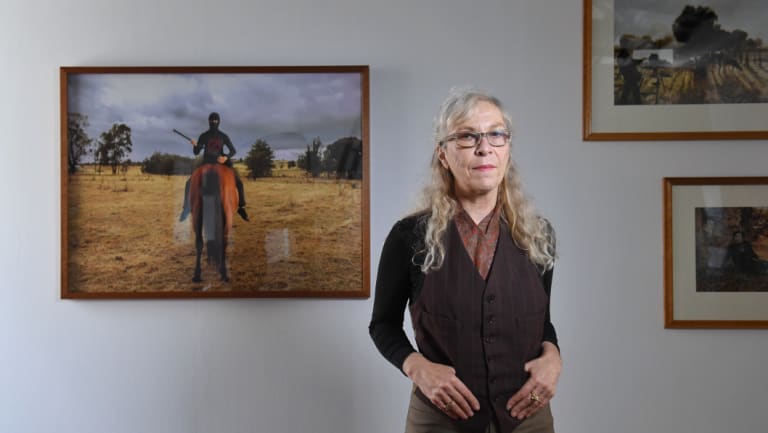 “Knowing the story that lies behind the portrait of my mother in Prague – having survived the Holocaust, then being forced to flee her home again, become a refugee and finding safe passage in Australia – gives this portrait even greater poignancy.”

Street Photography is at the Museum of Sydney until July 21.