A couple who left their jobs in the NHS to travel 25,000 miles in a camper car are now stranded in Morocco as they wait for the adoption of a stray puppy they found on the roadside to go through.

Occupational Therapist Alex Hunter, 29 and Prosthetist Doug Oldrey, 30, from London, have been completing a charity car rally through 40 countries in Europe, central Asia and north Africa.

Since their journey began in July they have been living in and driving their trusty 1.2 litre Vauxhall Agila 2003, which cost them just £450 and is nicknamed Sheila the Agila.

But after four months on the road, the intrepid couple were forced to stop their road trip after a tiny dog ran out in front of their car, almost causing a crash. 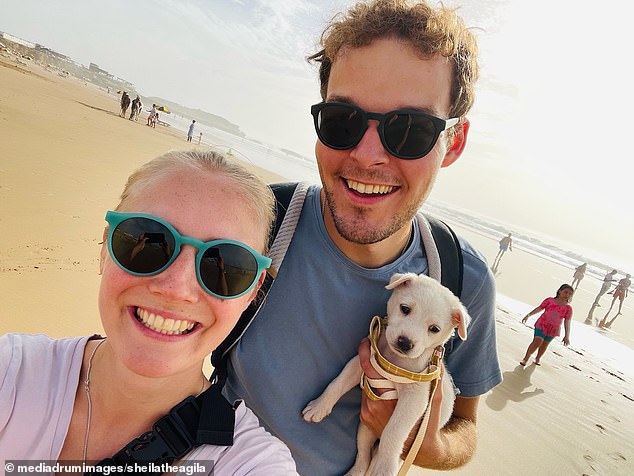 A couple who left their jobs in the NHS to travel 25,000 miles in a camper car are stranded in Morocco as they wait for the adoption of a stray puppy they found there to go through

The medics jumped out of the car on the Moroccan mountain pass and went to check on the puppy, who was unharmed but clearly suffering from malnutrition.

The stray pup, who they estimated was around five weeks old, stole the couple’s hearts and they decided to take her in and get her back to full health.

They named their new companion Tagha, and are now desperately raising funds to get her to the UK, which they say could take months. 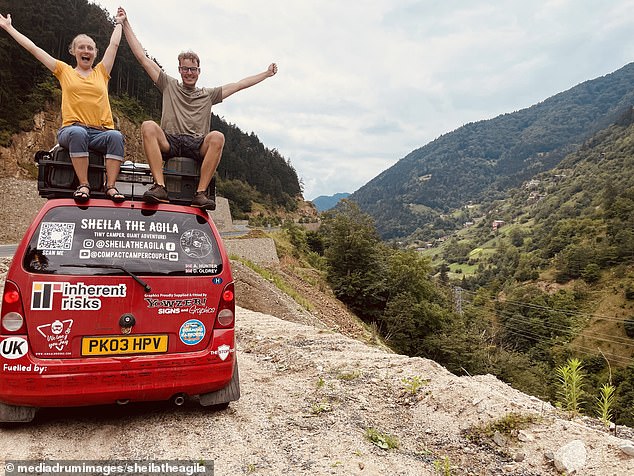 Occupational Therapist Alex Hunter, 29 and Prosthetist Doug Oldrey, 30, from London, have been completing a charity car rally through 40 countries in Europe, central Asia and north Africa 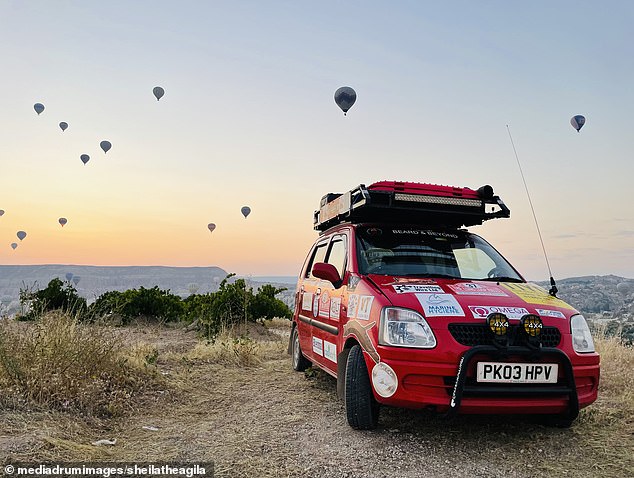 Alex and Doug have been living in and driving their trusty 1.2 litre Vauxhall Agila 2003, which cost them just £450 and is nicknamed Sheila the Agila

‘She ran out in front of our car on day four in Morocco and was around five weeks old with no mother or any hope of survival.

‘We couldn’t possibly leave her behind so whilst the five-month adoption process is underway we plan to continue to explore beautiful Morocco.

‘Of course, we felt fate had brought this little one to us and the only option we could see was to bring her home to the UK.’

They explained their concerns about leaving her on their JustGiving page, writing: ‘kennels have a 90 per cent mortality rate here for puppies so that was never an option.’ 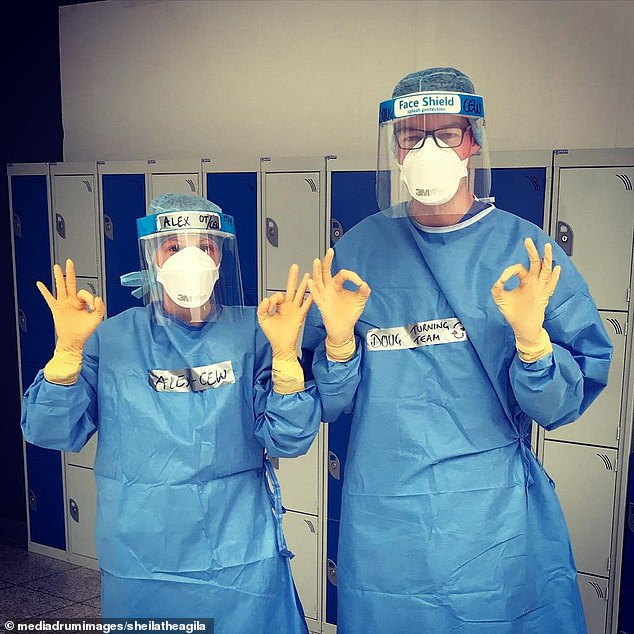 Once things settled down with Covid, Doug left his job and Alex took unpaid time off her job in the NHS in order to undertake the rally that they had planned pre-covid 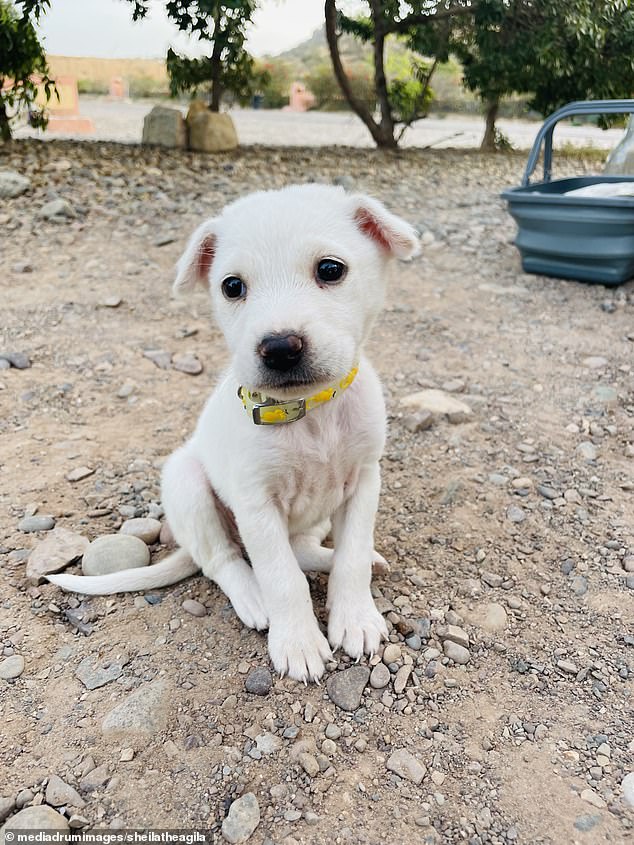 The stray pup, who they estimated was around five weeks old, stole the couple’s hearts and they decided to take her in and get her back to full health

While Doug is staying with Tagha in the campervan in Morocco as she awaits the blood tests and vaccinations she needs, Alex is due to come home to return to her job in the NHS.

The couple first planned their mega roadtrip to start in 2020, when they were due to complete their studies and drive in The Mongol Rally, an intercontinental car rally that begins in Europe and ends in Ulan-Ude, Russia.

But, because of the pandemic, they went straight into frontline healthcare roles. 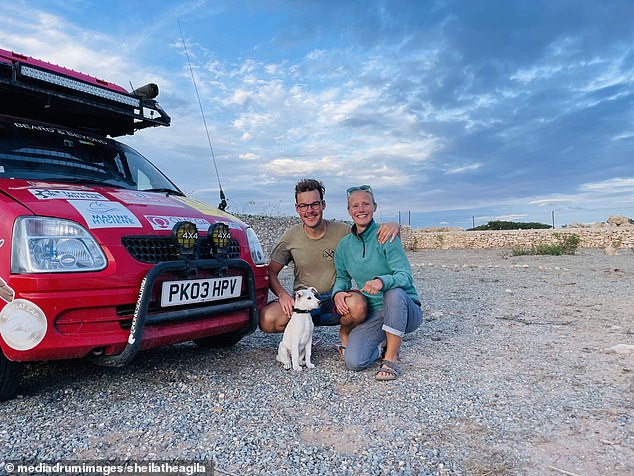 While Doug is staying with Tagha in the campervan in Morocco as she awaits the blood tests and vaccinations she needs, Alex is due to come home to return to her job in the NHS

Once things settled down with Covid, Doug left his job and Alex took unpaid time off her job at the NHS in order to undertake the rally that they had planned pre-covid.

Alex and Doug created their own rally with two other teams travelling 25,000 miles across 40 countries based on Covid border restrictions and current conflict areas and named it as the Long Loop Rally.

They have raised £2650 of the £3000 target for their two chosen charities – Blesma, a charity working with military personnel and veterans who have suffered with health difficulties and Cool Earth who work with indigenous populations to come up with sustainable solutions to stop deforestation around the world. 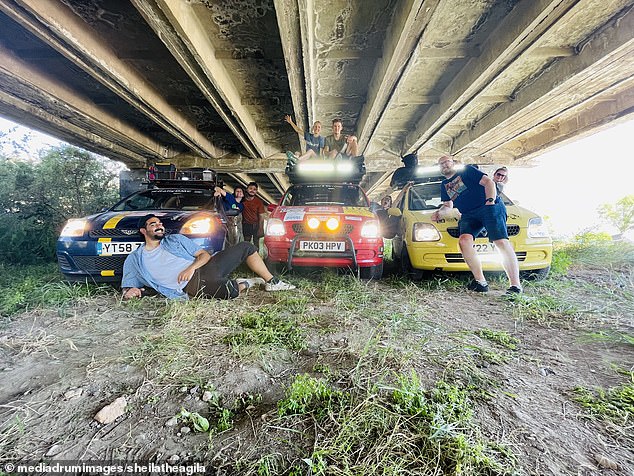 Alex and Doug created their own rally with two other teams travelling 25,000 miles across 40 countries (pictured in Armenia) 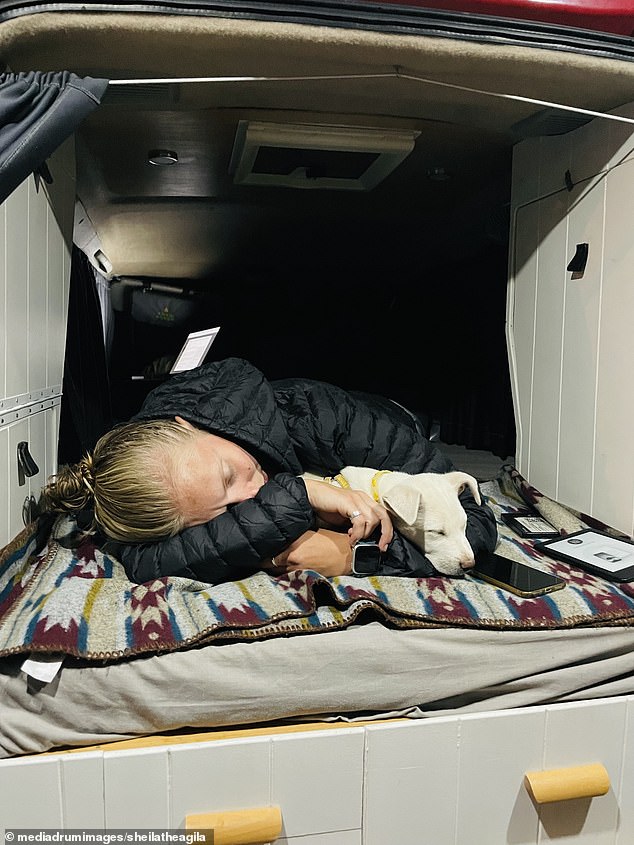 Alex and Tagha, the stray Moroccan pup the couple rescued, taking a nap in the back of Sheila

The couple also expressed their pride at proving that living in a tiny camper is possible, and a fraction of the cost of high rents back in the UK with the added perk of being able to see the world.

‘We can’t express how much we have loved living in our car the past few months and have learnt so much about ourselves and each other and meeting people along the adventure.

‘We feel we have also proven that you can explore the world with the security of a camper for only a fraction of the cost of a van or motorhome.

‘All this we have done while raising money for charity and then rescuing a helpless Moroccan puppy.’

Anticipating their move back to the UK once Tagha is ready to go, the couple said they don’t expect they will be leaving the van life behind anytime soon.

‘Being in a car is certainly less expensive in terms of rent,’ they said.

‘We have come to terms with the fact that we will likely never be able to afford a house in the UK with current prices, the rise in energy bills etc. and so have had van life as our ambition for some time now. 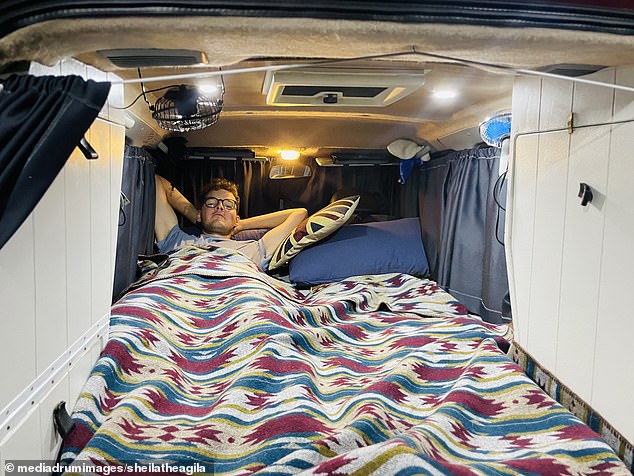 Alex said: ‘We occasionally have people in disbelief that we live in such a small city car, especially as Doug is 6’2 tall’

‘In our case living in a car is also cheaper to insure and run than a van.

‘We also just don’t think we will be able to ever afford a house, especially whilst we continue to pay rent.

‘Living in a car means we can save money in the long run and look at other opportunities aside from becoming tied to a mortgage.

‘When we return from our current trip we have a plan to convert a van that we already own whilst working in the UK.

‘Maybe one day we will want to be in a house and be able to afford it, but at the moment, a car suits us perfectly.’ 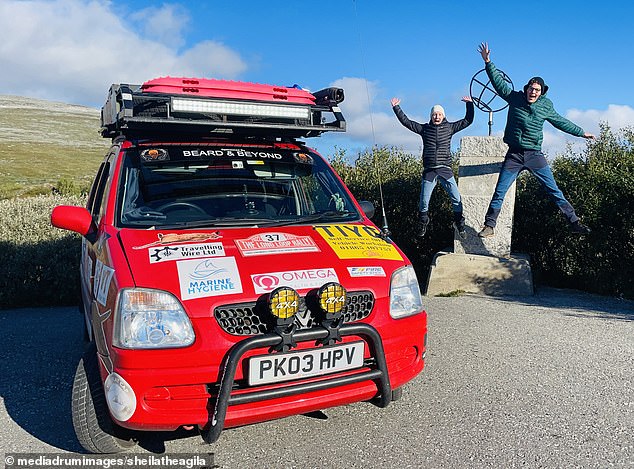 Alex and Doug jumping for joy in the Arctic Circle, where their vehicle stood up to the challenge of the terrain

Living in a tiny car is by no means easy, but the experience has taught Alex and Doug how to live in a minimalistic way and to worry less about material things.

‘As we live in a tiny car, space is even more of a premium than with living in a van, so we have to be very careful with packing and working out exactly what we will need for a journey,’ they said.

‘We did lots of short trips in the UK which helped us to work out what we did and did not need for such a long journey through so many different countries and climates.

‘We have actually found the freedom that car life can really offer us and certainly made us rethink our future plans and aspirations.

‘We have come to realise how simply we can live, with less possessions and less need for them. 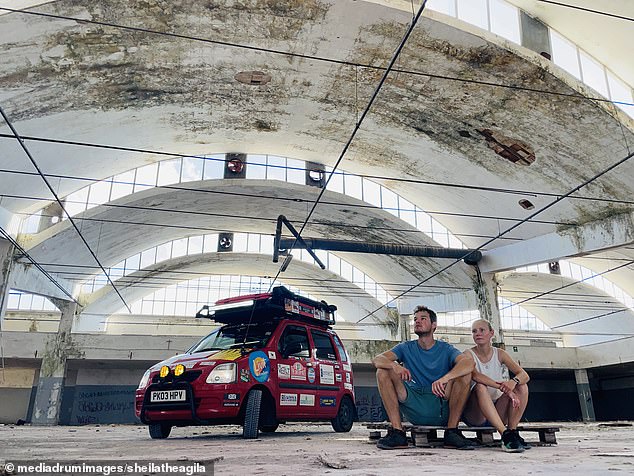 Alex and Doug in an abandoned shoe factory in Italy. The couple said there was plenty of disbelief when they told people their plans

‘We have had to problem solve a lot of situations on the road because we haven’t had the exact tool or item to fix something outright.

‘This has challenged us and given us a chance to look at situations from outside the box in order to solve them.’

Alex and Doug said they received incredulous comments from people about undertaking such a mammoth expedition in such a tiny car – and have proven many wrong having completed their journey. 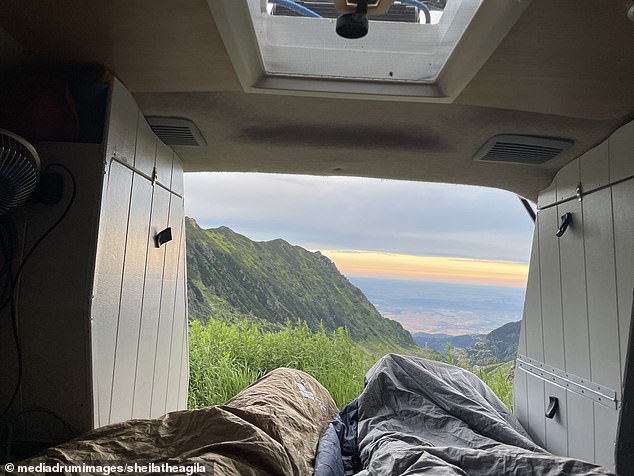 The couple have seen some stunning scenery from the back of their car, which has taken them across 40 countries 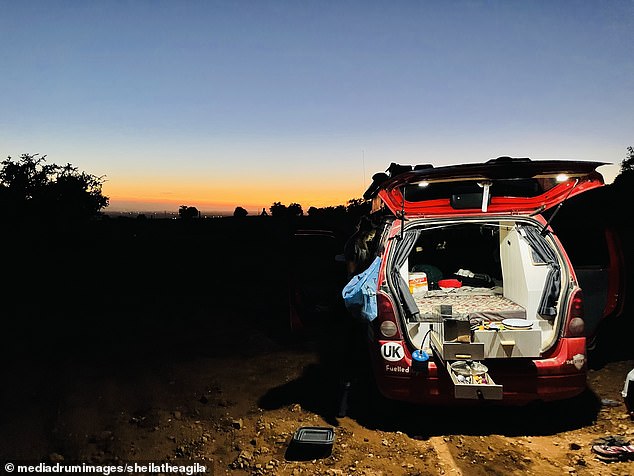 Sheila the Vauxhall Agila set up for a night under the stars. The couple have lived in the car for months

‘We occasionally have people in disbelief that we live in such a small city car, especially as Doug is 6’2 tall,’ said Alex.

‘We have had some people who were adamant that our plan to convert the car into a camper and travel in it wasn’t possible but we have demonstrated that you can make a camper out of a tiny car.

‘In fact, it is more affordable and accessible to people and you don’t have to have a big van. 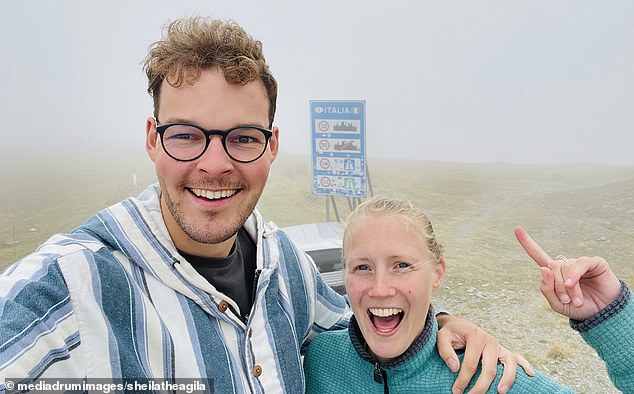 The adventurous couple grin as they travel through Italy, one of the first stops on their mammoth road trip. Pictured on the Switzerland and Italy border 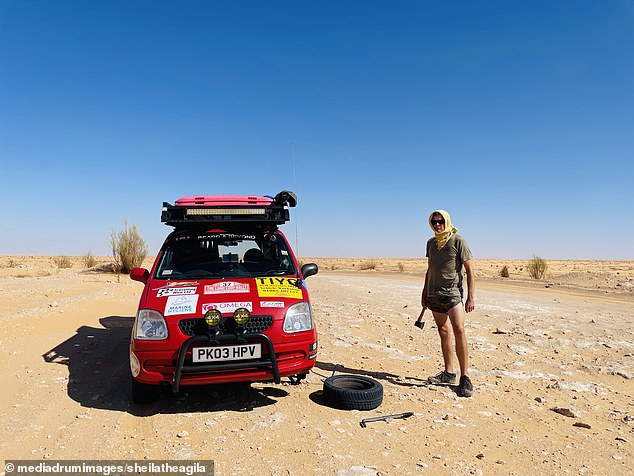 Doug is pictured changing Sheila’s tyre in the Sahara desert. The couple have traveled across north Africa in their trusty car

‘We have also had many comments stating that we would not be able to cover the terrain we have done in such an unsuitable car.

‘Again we have proved them wrong and taken Sheila over terrain that would challenge the best overlanding 4×4, including mountain slopes, deserts and the Arctic.

‘Other than that we have been very lucky, people are usually just curious and perhaps we tend to be drawn to more like minded people and so don’t come across people who may disagree or criticise our lifestyle choices.’ 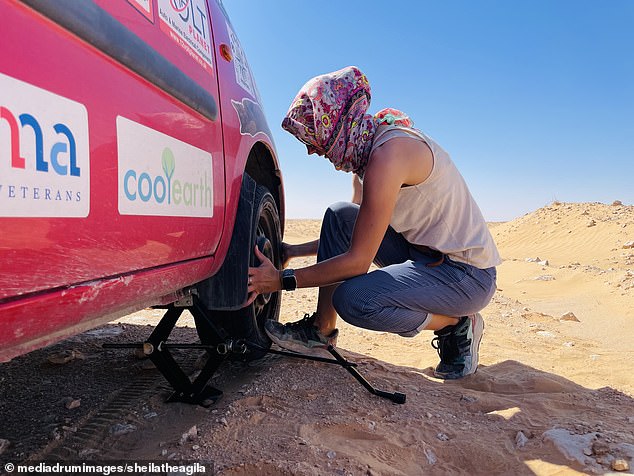 Alex works on the car in Sahara in Tunisia. The couple plan to continue living in a van back in the UK 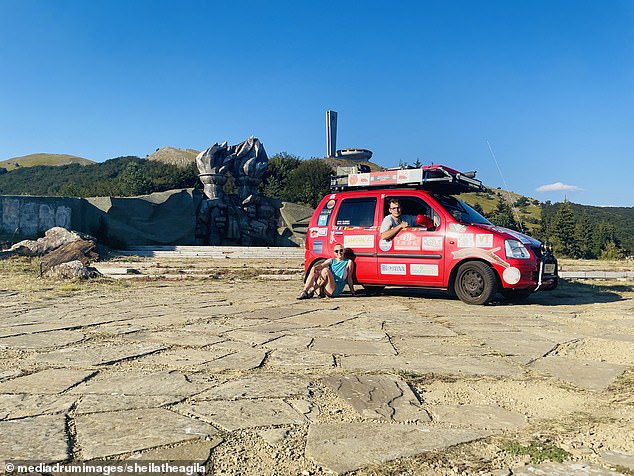 If you enjoyed this, read more: Accountant, 26, and her IT consultant boyfriend, 27, who were tired of the humdrum 9-5 quit their jobs to travel around Europe in a van

Vanlife couple who spent £24,000 transforming vehicle say it’s now their ‘dream home’ – although they can ‘barely stand up’ inside