Scott Morrison and many of his closest allies in federal politics went to ground on Sunday morning after a devastating election loss that booted the Coalition from office after nine years and wiped out Liberal moderates.

While the focus within the Coalition quickly shifted to who the next leader of the Liberal Party would be, another question remained unanswered: What will Australia’s 30th prime minister do next? 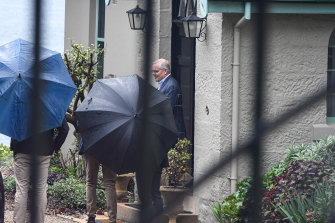 On election night, Morrison confirmed he would stand aside as leader but intriguingly also said he planned to remain in parliament – at least for now.

A close ally of Morrison’s said on Sunday morning the outgoing prime minister’s political future would become clear in the coming months.

“I don’t know if he will serve a full term, it will depend. We should know in the next six months,” they said, speaking on condition of anonymity.

NSW Liberal senator Hollie Hughes, who is close to Morrison, paid tribute to the outgoing prime minister on Sunday morning.

“Scott Morrison is not [former prime ministers] Malcolm Turnbull or Kevin Rudd – he will never forget the Liberal Party have given him the privilege of this office and he will maintain for the rest of his career a dignity that unfortunately we have only seen from Tony Abbott, John Howard and Julia Gillard,” she said.

“After 20-plus years of politics and friendship together, whilst Scott brushed off the personal attacks, those of us who knew him best know how unfair they are.”

Hughes joked that “when things settle down I am very much looking forward to a margarita or three with Jenny [Morrison]” . 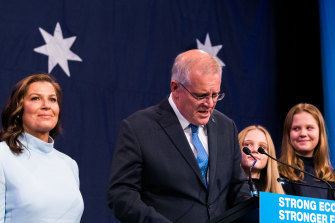 On election night, Morrison confirmed he would stand aside as leader but intriguingly also said he planned to remain in parliament – at least for now.Credit:James Brickwood

Since 2007, when Howard lost the prime ministership and his Sydney seat of Bennelong, ex-prime ministers have tended not to hang around long on the federal stage.

Gillard and Turnbull quit politics within a matter of months of losing the nation’s top political job, while Rudd did the same the second time he lost. In contrast, Abbott remained in parliament for four years after his ousting as leader in 2015 – and was roundly rejected by voters in Warringah in 2019.

Albanese has told colleagues he is not in a rush to move into The Lodge or Kirribilli House, the prime minister’s official residences in Canberra and Sydney, and that the Morrison family should take their time in moving out.