The instant Brittany O'Neill found out a film about her life was going to premiere at the Sundance Film Festival, she started dieting. The movie is, after all, a transformation story of how she'd gone from an unmotivated, out of shape 20-something to a healthy marathon runner who finished the 42.2-kilometre New York City race in under four hours.

"The constant refrain with my friends became: 'I can't eat anything, I'm going to Sundance'," O'Neill says. "I was like, 'I have to look like an "after" photo'."

And when she flew to Utah in January for the debut of Brittany Runs a Marathon, she had dropped a lot of weight – less than a kilogram away from the ideal number she'd long dreamed of seeing on the scale. But her thin frame wasn't received as positively as she'd hoped. Upon greeting Jillian Bell, the actress who plays her in the film, O'Neill was met with concern. 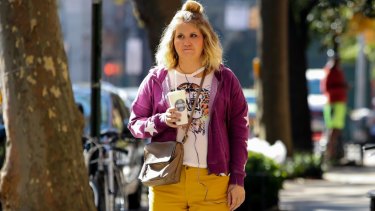 Jillian Bell, who was a writer on Saturday Night Live, “fell in love with doing a movie that wasn’t a straight comedy”.

"I said something like, 'Hey, I adore you, and I don't know how to talk about this because it's sensitive for all of us, but I want to make sure you're OK'," says Bell. "'Are you eating regularly? Are you all right? You're not normally in the public eye, and that's a lot of pressure'."

O'Neill says with a laugh: "And of course, I was like, 'Jillian thinks I'm too skinny'. It's so sick. But my growth has been exponential because of that experience."

Seven months after the festival – where the film sold to Amazon Studios in a major $US14 million ($9.34 million) deal – the women reunited in Los Angeles days before the movie's US release.

She and Bell are enjoying breakfast while trying to ignore the heat outside at a restaurant on Sunset Strip. Because they live on opposite coasts of the US, the actress and her real-life counterpart – both aged 35 – didn't meet until the film was months into production.

Bell was also focused on her own weight loss. She began running – usually three or four kilometres a day and about six at at her maximum. She lost 13 kilograms before filming and an additional five during the shoot. The experience, she says, helped to inform the character's emotional state.

"When I first read the script, there were parts where I was like, 'I don't know why she's struggling so hard in this moment, or lashing out at people' and then I did it," Bell says. "I started getting mad at people who weren't experiencing the same thing as me and didn't understand why I was having trouble when people were ordering chips and salsa to the table."

Because of the film's tight production schedule – it was shot in just 29 days – Bell was sometimes required to wear prosthetics and a body suit to look bigger. She found the constant shift in appearance challenging. With the extra weight off, she noticed crew members remarking on how beautiful she looked. When she appeared heavier, nobody commented on her looks – or even thought to compliment the colour of her dress.

The more weight she lost, the more alone she felt. She began looking at different women, evaluating their bodies and judging whether she was bigger or smaller than them. When she wrapped the film, she was skinnier than she'd ever been, but she was unhappy.

"Everyone was asking: 'Do you feel great now? Is this the best you've ever felt?' Someone even said to me, 'This is the weight you should be,' and I thought, 'Well, that's damaging'," Bell says. "I was a little bit lost, getting all of these outside opinions when I didn't know who I wanted to be. So I actually gained weight. I was so in my head, worrying about being in social situations where someone would comment on my weight loss in a negative or positive way. It just made me feel better to be somewhere in the middle." 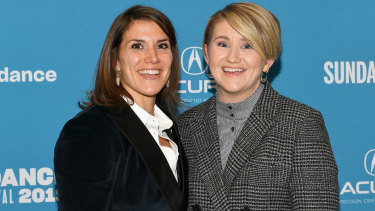 Brittany O’Neill (left) and comedian Jillian Bell at the the premiere of Brittany Runs a Marathon at the Sundance Film Festival. Credit:Getty Images

These were the types of conversations Paul Downs Colaizzo was hoping to inspire when he set out to make Brittany Runs a Marathon. The writer-director began working on the screenplay in 2011, when he and O'Neill were roommates in New York City.

The two had met at NYU, where they were both theatre students, and reunited in their mid-20s to share an Upper West Side apartment. Colaizzo, who began his career as a playwright, was a script associate on Broadway's Sister Act; O'Neill was the managing director of a theatre company.

In their downtime, the friends would have a lot of what Colaizzo described as "big life talks", discussing how they hoped to attain happiness and success. That's when O'Neill, who felt like she was in a rut at her job and had struggled with her weight her whole life, began running and her roommate noticed the positive change.

"Brittany is instantly lovable – so smart and charismatic – and I look at her and all I see is potential," Colaizzo says over the phone. "But when we were younger, I don't think she saw a path to fulfilling her potential. So, as her friend, I wanted to encourage her to find her way to that path. When she started taking the first steps to find it, I started writing it, too."

One night Colaizzo told O'Neill he was writing a movie about her. At first, because she was so obsessed with running, she was only concerned with what the character's marathon time was. And she also didn't fully believe the film would ever come to fruition. She'd been the first to read all of Colaizzo's scripts over the years – plenty of which had never been turned into full-blown projects.

"But when I gave her the script, she went into her room and I remember just staring at her bedroom door, waiting for her to finish," he recalls. "When she emerged, she was crying, and we just hugged each other for a long time."

By the end of their two-and-a-half years together as roommates, O'Neill had lost 36 kilograms. And though she recognised it was tempting to view her journey as a "thin-equals-happy story," O'Neill kept reminding Colaizzo that she didn't want the movie to have that message.

"I wanted to paint an honest picture of how the world treats people of different sizes," the filmmaker says. "The goal was to show a woman's journey to self-agency and self-respect while exploring the world that she has no choice but to do that in. It's a story about a woman finding her own dignity, when an obstacle in doing that in this world is that men look at women differently if they look a certain way."

When she first came to Los Angeles at 18, Bell was worried she'd be asked to change her look to get work as an actress. While that hasn't been her experience, she bristles when she hears from female peers who've been advised to "get a nose job or maybe lose 20 pounds [nine kilograms]" by "some old man". 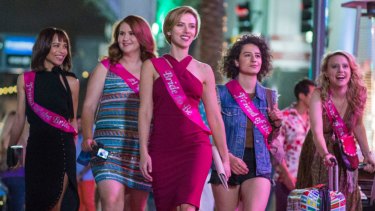 "You become your own brand – and I hate that, but you do in this industry – and to be told that your company needs to lose 35 pounds [16 kilograms] is just ridiculous and so upsetting," she says.

A former Saturday Night Live writer, Bell has mostly been known as a supporting actress, turning in strong comedic turns in films such as 22 Jump Street and Rough Night. Before Brittany Runs a Marathon, she'd never carried a movie on her shoulders – and she'd also never really done dramatic work. (Paul Thomas Anderson cast her in a small role in 2012's The Master after seeing her on Comedy Central's Workaholics but she said she was on screen for "like 20 seconds, so that's not really enough of a taste".)

Neither Bell nor O'Neill are running as much as they used to. O'Neill has tendonitis that keeps her from putting in too many kilometres, but she still hits the gym and teaches a circuit training class once a week. She says people have already been telling her that she has inspired them to sign up for the marathon, though she doesn't think that's ultimately the message of the film.

"I like that it could inspire people to set a big goal and believe they're capable of more than they think," she says. "A lot of people think that when you try to make a big change, it's an act of self-hatred or you're trying to run away from something. But it can be an act of self-love, where you want something more for yourself."

Bell says, turning to O'Neill: "It must be incredible for you to feel like you're inspiring so many people. I did the film and I was hoping it would be therapeutic – that I'd release my demons. I would say I lost about 70 per cent, which I think is a high percentage of demons. The 'You're not good enough' or 'People won't be attracted to you if … ' or 'Are you on the end of the picture and your arm looks the biggest' demons. Now, I try to throw those thoughts out the window. Why should I hold onto that as the truth of who I am?"