William Wegman's dogs are the first thing you hear after ringing the doorbell at a nondescript warehouse in New York's Chelsea neighbourhood.

His Weimaraners, Flo and Topper, are barking madly in anticipation of a new visitor, their paws skittering along the concrete floor as Wegman's wife, Christine Burgin, opens the door to the couple's massive home-studio, a former preschool turned into a lofty maze of rooms and staircases. 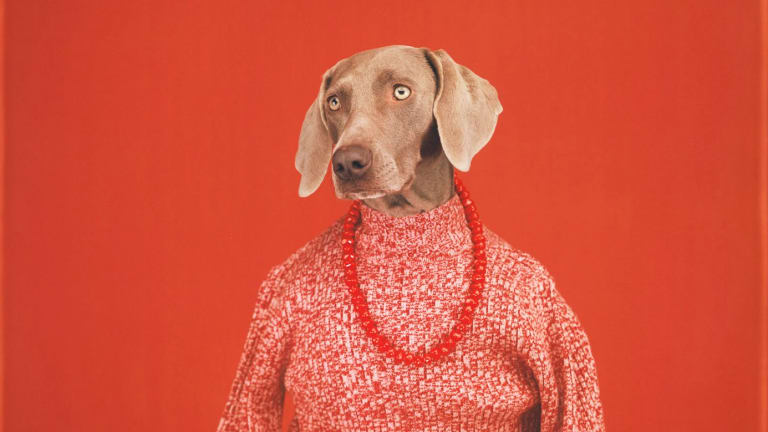 The dogs are towering creatures, almost touching my nose as they leap up on their hind legs. They are also imposingly beautiful, with glistening grey coats and piercing eyes that almost never leave the 74-year-old artist as he shows me around his home, through various rooms of half-finished paintings, stacks of old postcards, photo archives, props, his son's vintage cars and bits of ice-hockey memorabilia.

Dogs obviously rule here, much as they have shaped the trajectory of Wegman's oeuvre. Chances are you have seen one of the 10 Weimaraners he has had over five decades: perhaps on a wall in one of the many museums and galleries his photographs have graced. Or in one of his wildly popular dog calendars, coffee table books or children's books such as Cinderella and Mother Goose, many released by Burgin, a former gallery owner who publishes art books. You might also have spotted them on Saturday Night Live and Sesame Street, on covers of The New Yorker and National Geographic, or in the pages of French Vogue last year, when Flo and Topper modelled haute couture. Soon, a vibrant mosaic of them will greet commuters at New York's 23rd Street subway station. And a trove of polaroids are now showing at the National Gallery of Victoria, one stop in a four-year touring exhibition of photographs from the 2017 book Being Human. 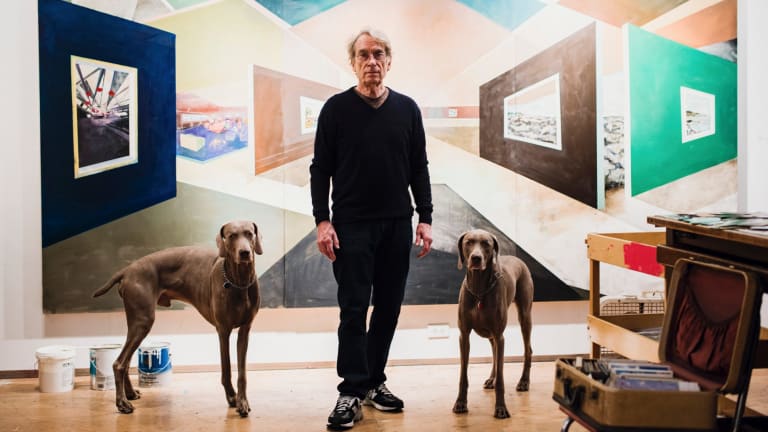 William Wegman with Flo and Topper in his New York studio.Credit:Shawn Brackbill

The dogs have brought a strange type of fame to a man who majored in painting at the Massachusetts College of Art and forged an identity as a quirky conceptual artist in 1960s California. He has always drawn and painted, and now dedicates most of his time to kaleidoscopic mural-style paintings based around vintage postcards. But as he told Vogue recently, perhaps with a hint of soreness, "I've never been asked to go on a talk show to talk about my paintings.

"I'm really at peace with all that," he tells me, as we sit at an old children's desk with Flo and Topper jostling to get between us.

"I've always done more than just [the dogs] and it's a nice balance to have something that I'm not going to be asked to go on a talk show about. I'm really happy about that. I love painting and I like showing them but I don't really expect it."

A couple of years ago, Wegman's assistant suggested cataloguing and digitising thousands of old polaroids he had kept in storage since the 1970s. It gave way to Being Human, a collection of 300 previously unseen photographs that show why Wegman's dogs have come to define his career. 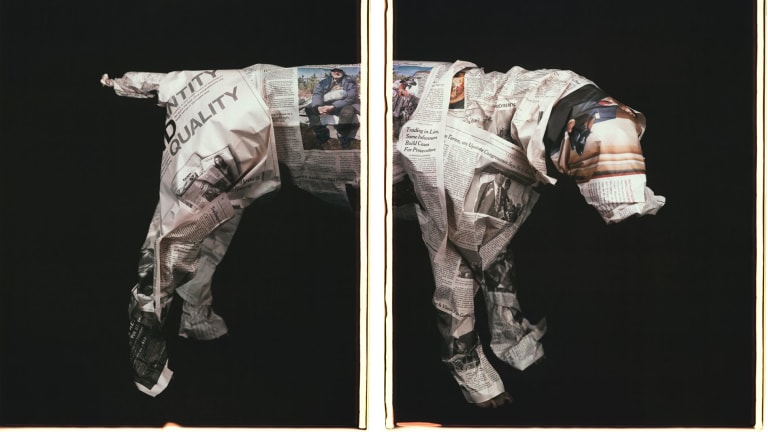 The images are a compendium of eras, emotions and art forms; a scrapbook of beautiful photos, from the melancholy to the comical, that transcend their canine subjects and trace an unlikely career.

"It was very moving, very emotional going through almost 50 years of working with these dogs," he says. "Going backwards through my photos, I'd see the dogs get younger and younger, then another one appearing. And it was astounding how many ideas I thought were new but I had tried years ago. The whole experience was a revelation." 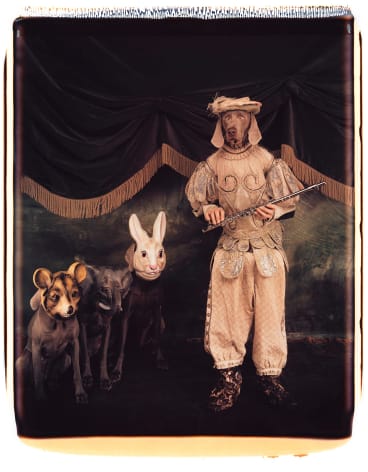 It all started in 1970 when Wegman saw a newspaper ad for Weimaraner puppies. He named his Man Ray, after the conceptual artist, and brought him to the studio for company. Man Ray seemed extraordinarily interested in what Wegman was doing and was constantly pining for attention. When he allowed the dog to get in front of the camera, the transformation was stunning: he became calm, proud, still.

Wegman photographed Man Ray extensively in the 1970s but his artistic path was fully cemented by his second Weimaraner, Fay Ray, in the late 1980s. While his relationship with Man Ray was like a boy with a dog, with Fay – an intense dog who loved to pose – it was like artist and muse. 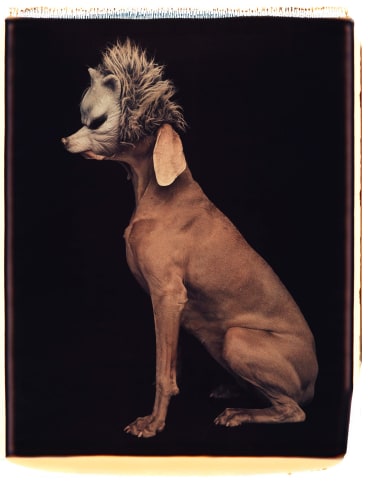 Fay became a star, known for her 1987 segments on Sesame Street and memorable images shot on a hulking 20 x 24-inch Polaroid, including one in which she stands tall on old-school rollerskates. Her litter of eight became an artistic troupe with their own personalities; there was Chundo, the masculine one, and Batty, the silly one. Those dogs gave birth to new dogs who gave birth to new dogs. Each lent itself to different scenes and projects. Some were so languid that Wegman could drape them over furniture or blanket them in nature. Others instantly played the handsome woodsman or lithe Lolita.

"I think the perception of so many viewers … is actually to laugh, to think, reflect and perhaps even connect [the photos] to our own human lives," gallerist Angela Westwater said at the opening of last year's exhibition William Wegman: Dressed and Undressed in New York. "I think what they end up doing can be quite profound." 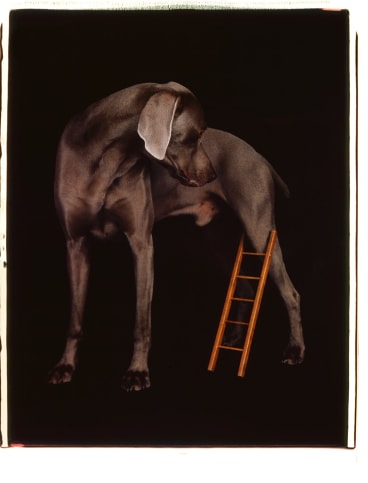 From the beginning, Wegman was wary of his photographs being kitsch or anthropomorphic. Instead, he created portraits that are tender, amusing, sometimes maudlin, or quietly beautiful. Many sets and costumes are odes to art forms such as cubism, surrealism or abstract expressionism. There are bright, lush nods to Giuseppe Arcimboldo in the plastic fruits piled up on Fay Ray in Harvest, and muted references to Fernand Leger in a block-coloured collection of eponymous 1998 photos. Some are downright silly – a dog blowing his nose or playing the flute. Some are achingly moving – like Red Head, the final picture of Man Ray, or On The Way, with Fay Ray in a dressing gown looking maternally at her daughter Batty.

Author and curator William Ewing, a close friend of Wegman's, summarised it in the foreword to Being Human: "Wegman's portraits have that rare quality of reflection, in both senses of the term: like mirrors, we find that we are staring at ourselves." 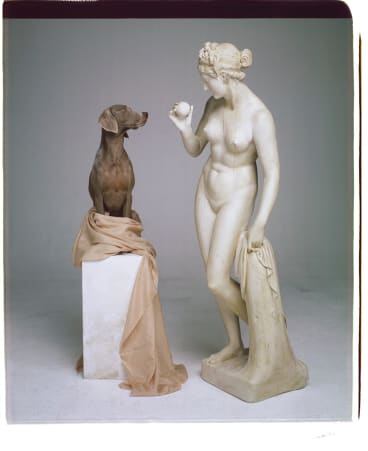 Wegman's life may have oscillated around dogs, but his art is less about them than the foibles of human nature, the exploration of art or, as Wegman says, the curious process of "becoming".

"The dog isn't really what it is in my pictures; there's something fuzzy and energising about something that's becoming something it isn't," he says. "That's why there's illustrations of Little Red Riding Hood and not photo books of Little Red Riding Hood with real children wearing a cape because that would just be deadening. But when it's not that, when it's becoming that, there's something kind of amazing and more beautiful about it." 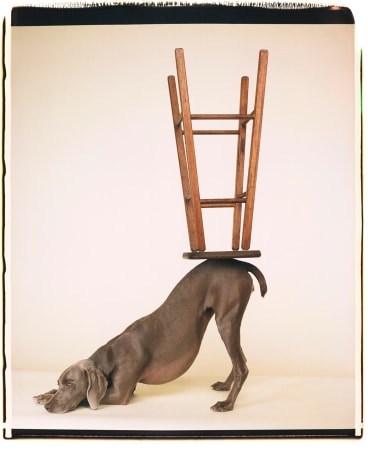 Sitting cross-legged, in sneakers and a daggy shirt, Wegman is so unpretentious as to seem a tad detached from his art, shrugging off his musings as probably just nonsense.

"It's really a lot about a transformation, which is a corny-sounding term," he says. "But you've got something and how do you make it not it? I'm not sure but that seems to appeal to me – how to make something transform and hide and come out again in a different way." 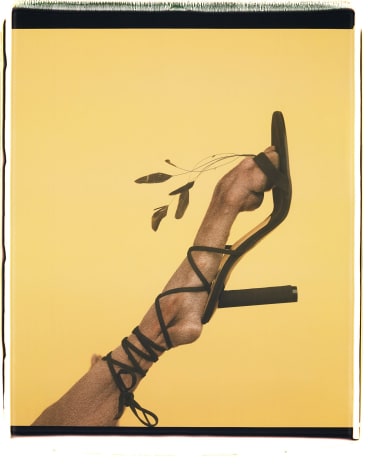 Wegman has been accused of animal cruelty and exploitation but he says the dogs are his collaborators rather than his subjects.

As we approach the photo studio on the bottom floor of Wegman's home, the dogs jostle to get in front of each other, seemingly sensing they're about to work. By the time Wegman opens the door to the airy studio, they're yelping and prancing excitedly.

Flo, with her psychic intensity, jumps up on a box and poses immediately. She looks at Wegman, as though for approval, then holds her gaze skyward, dead still.

Wegman has barely said a word to her but they seem to understand each other intuitively – like man and dog, artist and muse.