In normal circumstances, you’d expect a government to take some tough decisions early in the political cycle to pad out the bottom line, before ramping up spending towards the end to fight an election.

But nothing has been normal about the past two years. The government was forced to ramp up spending and debt to historic levels to insulate the economy from the pandemic. The wages bill for public servants has soared to record levels. 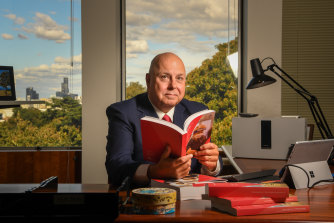 Treasurer Tim Pallas peruses the budget papers that will be released on Tuesday.Credit:Justin McManus

Now as the government approaches the election it is facing huge financial demands just to get the health system back to where it was before the pandemic. Add in the fastest growing inflation for 20 years, rising interest rates, a rising wages bill and geopolitical uncertainty and the task of managing the politics of higher spending without meaningful budget repair measures becomes difficult.

The Treasurer is presenting a particularly optimistic scenario for the state economy, one where the budget is lifted out of trouble by booming economic growth.

Unlike previous budgets, this time the government has not attempted to raise revenue to pay for its social agenda with tax increases. Nor has it announced any spending cuts to repair the budget. The “savings” line item in the budget was conspicuously blank. The so-called efficiency dividend imposed on the state bureaucracy has now vanished.

Instead, in what might be seen as a gesture towards fiscal repair, it has announced a Victorian future fund. According to Treasury, the fund will support the state’s debt stabilisation strategy, with $10 billion in the medium term from the privatisation of VicRoads’ registration and number plate business.

But any impact on COVID-related borrowing could be a long way in the future. As the budget notes, the investment returns from the fund will be “quarantined and returned to the fund” so that its balance grows over time.

The purpose isn’t to repay debt, but to offset it. As the papers show, net debt is still expected to rise from about 19.8 per cent of the state economy to an expected 26.5 per cent by mid-2026.

In explaining Victoria’s financial woes, the budget apportions blame towards the Commonwealth. In this sense, it is an unusually political document. Just look at chapter 3 of budget paper number 2, with the heavily loaded title: “Victoria’s economic recovery despite insufficient Commonwealth support”.

It devotes 13 pages to complaining about the federal GST, health and infrastructure carve-up. The complaints are justified. Victoria is, for example, getting just 5.9 per cent of Commonwealth infrastructure funding over 4 years, despite making up one-quarter of the national population.

But it is unusual to devote an entire chapter of the budget to prosecuting the argument.

Whether Treasury’s optimistic growth and budget predictions come to pass is of little concern to the government. Those are issues for coming years. Right now, the government is focussed on the next six months.