RICHARD LITTLEJOHN: Wherever you look, the country appears to be coming apart at the seams – it’s Anarchy In The UK all over again in 2022… just like it was 45 years ago

Days like this it is ­difficult to know where to start. Wherever you look, the country appears to be coming apart at the seams.

Public services are unravelling ­horribly and yet politicians are either powerless or unwilling to do anything about it.

With the Platinum Jubilee upon us, it’s Anarchy In The UK all over again, just as it was 45 years ago when the Sex Pistols gatecrashed the Queen’s quarter-century celebrations.

But it’s not the punks this time, it’s the public sector unions gobbing in our faces.

Back in the 1970s, Britain was an economic basket case struggling to recover from an enforced three-day working week because of power cuts caused by industrial militancy. 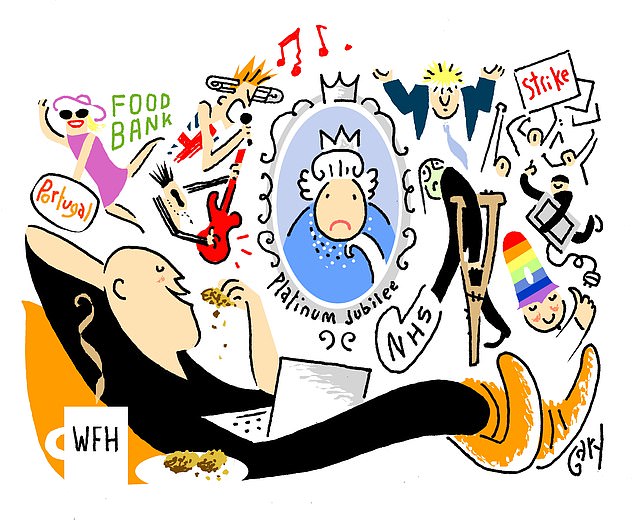 RICHARD LITTLEJOHN: Wherever you look, the country appears to be coming apart at the seams – it’s Anarchy In The UK all over again in 2022… just like it was 45 years ago

Today, a leisurely three-day week on full pay is considered an entitlement. Staff at key Government departments such as the Treasury and Work and Pensions (DWP) won’t even turn up at their offices more than once a week.

All attempts by ministers to cajole civil servants back to their desks have been contemptuously ignored, with the full connivance of Whitehall mandarins.

A Conservative Government with what should be a commanding nearly 80-seat majority has been reduced to shrivelled impotence in the face of rugged intransigence.

Yet ministers seem to have ­swallowed whole the entire work/life balance scam promoted by the ‘Human Resources’ industry.

Yesterday, it was disclosed that the Cabinet Office alone employs 700 HR ‘professionals’, dreaming up ever more imaginative ways of pampering employees.

Earlier this week, it was reported that staff at the DWP were being offered online ‘motivational workshops’, covering everything from jive dancing to the history of sex toys, to help them handle the ‘stress’ of ­working from home.

You couldn’t make it up. Alarmingly, this so-called Tory administration has become addicted to throwing money drunken-sailor style at every problem.

Here’s how crazy things have got. Civil servants are sitting at home in the commuter belt munching Hobnobs, still being paid ­thousands of pounds in London-weighting allowances, while ­boasting about how much they’re saving in rail fares.

Meanwhile, train company revenues have plummeted because of lack of passengers and have been bailed out by the Government to the tune of £7billion.

So the mug British taxpayer is subsidising the wages of stay-at-home civil servants while at the same time making good the losses of rail firms which would in any sane world be jam-packed with fare-paying commuters travelling to and from work.

This is the economics of the madhouse. But, hey, it’s only ­public money, therefore it’s nobody’s money. 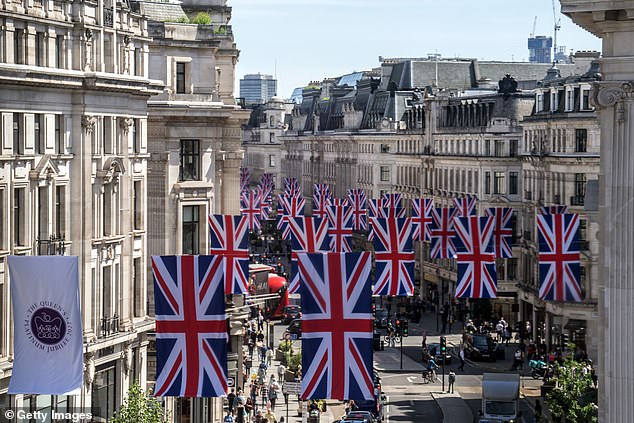 Pictired: British Union Jack flags are displayed along Regent Street to mark the forthcoming Platinum Jubilee of Queen Elizabeth II, on May 19

What’s a few more billion quid in the context of £400billion blown during Covid? Oh, and the icing on the cake is that, despite railway ­companies making huge losses, the unions are threatening a ­summer of strikes in support of higher wages.

God Save The Quee-eeen! Some mornings, after listening to the latest news, I keep thinking I’ve woken up in the late 1970s.

Bring on the Winter of ­Discontent. Nothing works ­properly any more. You can’t get a passport or driving licence for love nor money.

The airports are a ­disaster area. No public body, or private corporation for that matter, ­bothers answering the phone.

During the strike-happy Winter of Discontent, there was outrage when household rubbish went uncollected for weeks. Today, not emptying the bins every week is official policy, part of the fashionable ‘green’ agenda.

The same ‘net zero’ nonsense has turned our city centres and suburbs into crazy golf courses, littered with ludicrous Low Traffic Neighbourhoods and empty cycle lanes — all funded by hundreds of millions of pounds from a ­Conservative Transport Secretary — while at the same time ­increasing congestion and air ­pollution, not cutting it.

Elsewhere, having sanctified the NHS during Covid, the Government continues to shovel cash at an unreformed, top-heavy system which is failing hopelessly to ­provide adequate levels of service.

Millions now languish on waiting lists for everything from heart and cancer treatments to ingrowing toenails.

A&E departments are overrun, largely because securing a convenient appointment to see your GP proves virtually ­impossible these days.

Despite the daily heroics of ­medical and ancillary staff, the NHS is broken, probably beyond repair without the ruthless top-down overhaul which this Government with a huge majority has shied away from.

Ministers shower the health service with money, most of which disappears into a black hole.

To nobody’s surprise, it has been revealed that during Covid, the number of bureaucrats employed by the NHS actually doubled.

And for this we are now expected to pay the ­highest taxes since World War II. We keep being told the NHS is the envy of the world.

Maybe it was once, but no longer. Same goes for the Old Bill. We used to believe that we had the best police force on the planet.

Today, they make the Keystone Cops look competent. Over the years, this column has made a decent living documenting the growing stupidity and ­dereliction of duty exhibited by the modern police ‘service’.

As their interest in deterring or solving crime has declined, along with their bovine indifference to investigating everything from ­burglaries to car crime, their obsession with ‘diversity’ and political posturing has multiplied to the point of insanity.

Yesterday, we were treated to a photo of a Cambridgeshire copper in a helmet painted in rainbow colours to mark the International Day Against Homophobia, Transphobia and Biphobia.

It was the most ridiculous stunt since coppers started ­painting their nails and wearing high heels to raise awareness of modern slavery. Mind how you go.

This on the same day that Her Majesty’s Inspector of Constabulary said that police should use their discretion before making arrests when it comes to shoplifting by ‘vulnerable’ people hit by the cost-of-living squeeze. (Sounds like a licence to loot, which is what happened when they tried ­something similar in California.)

Presumably, he’s talking about vulnerable people like the woman detective who complained to Home Secretary Priti Flamingo this week that she had to use food banks because she couldn’t afford to buy groceries.

Didn’t stop her holidaying in Portugal, though. Even the Old Bill are ­embracing the cult of victimhood which infests our ­society today.

Yes, prices are rising and people are ­struggling. But you can’t turn on the news any more without seeing some ­hideously fat woman sitting in front of a 65in TV moaning she can’t afford to heat up a tin of baked beans.

What doesn’t add up is the torrent of stories about ­people having to choose between heating and ­eating, alongside yesterday’s report from the Cancer Research UK charity claiming that there will be 42million overweight or obese adults in Britain by 2040.

How do you get morbidly obese if you can’t afford to eat? No doubt this Labour Lite Conservative Government will unveil a new multi-billion-pound anti-obesity strategy any day now. 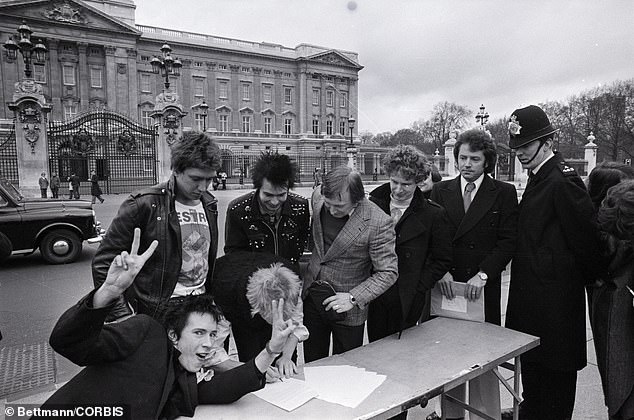 Maybe that will include forcing civil servants to get off their ­backsides and return to work.

And putting overweight bobbies back pounding the beat, instead of gawping at CCTV and trawling the internet in search of ‘non-crime hate incidents’ and ‘inappropriate speech’. Don’t hold your breath. Right now, the country feels ­rudderless, ungovernable almost.

Instead of pursuing proper Tory policies, this Government appears to take the knee before every mad, single-issue pressure group, from Black Lives Matter statue-­topplers and eco-nutters who glue themselves to the M25, to sinister trans-activists dressed as Ninjas menacing feminists defending the rights of biological women.

We’d be virtually self-sufficient in gas by now if ministers hadn’t caved in to a minority of anti-fracking hysterics.

As we prepare to celebrate the Platinum Jubilee, there’s a Last Days of Pompeii vibe in the air.

A curious mixture of decadence and decay. We’ve even been warned to watch out for a Biblical deluge of blood red rain this weekend.

And standby for the looming monkeypox lockdown. God save the Queen? Heaven help us all. We are going to hell in a handcart.