The series kicked off with Ali moving to Beacon Heights after landing a T.A. job. She was shocked when she arrived and was greeted by Mona, who left France after the reasons she was there “escaped” her – a little nod to the PLL dollhouse. Now, Mona works at the college in admissions. So, why was Alison brought there? 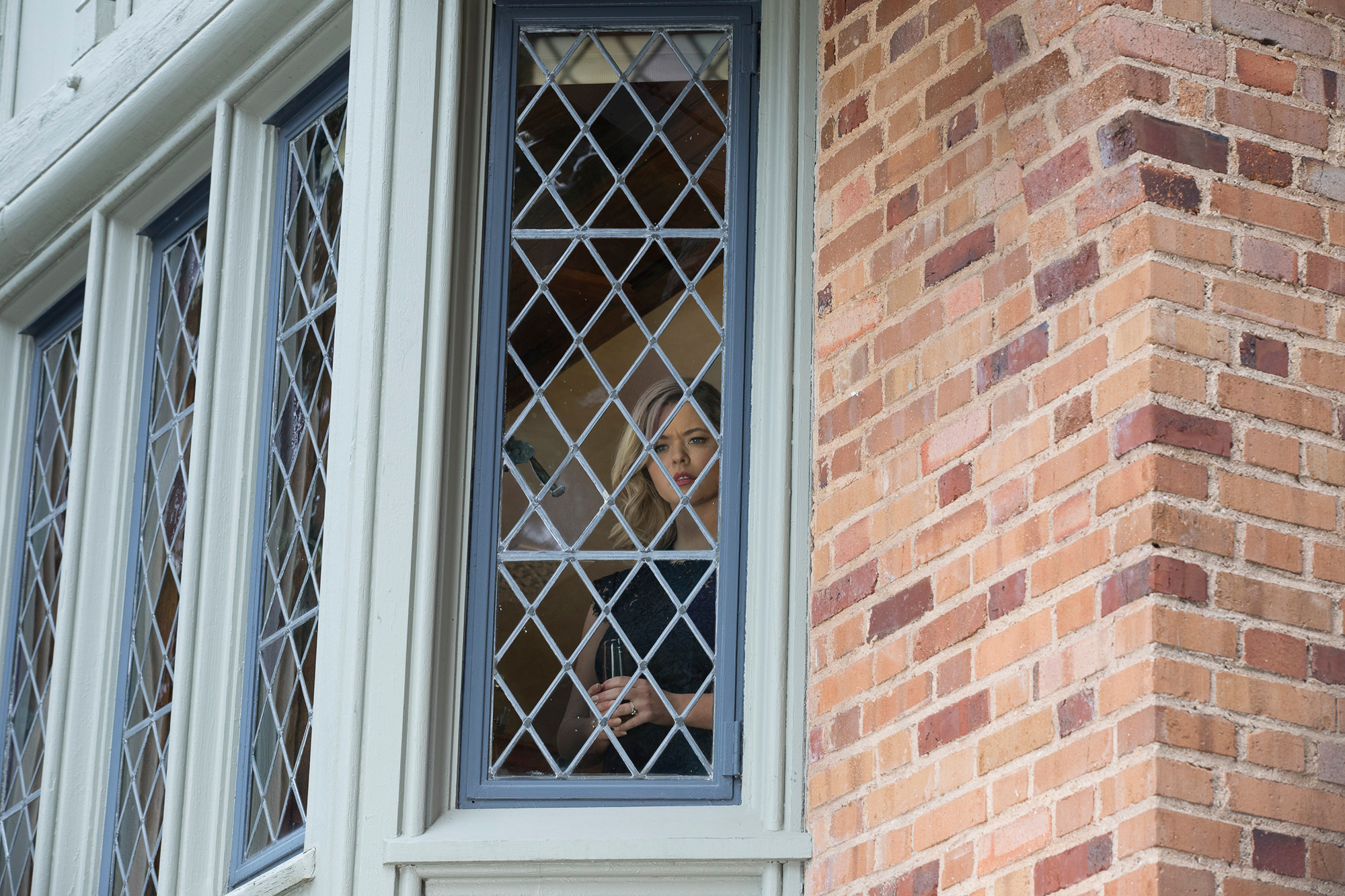 She quickly realizes not only is she qualified but she was brought in to help protect the students and help them deal with the pressures they’re facing at BHU. Claire Hotchkiss (Kelly Rutherford Opens a New Window. ) runs the school and her daughter, Taylor, died months before. In fact, Ali could be Taylor’s twin – something she immediately found as much more than a coincidence. According to Claire, Ali was there to try and help the student mourn, including Claire’s son, Nolan (Chris Mason), and his friends Caitlin (Sydney Park), Ava (Sofia Carson) and Dylan (Eli Brown).

Alison has learned a lot since her days in Rosewood and immediately begins to see the cracks in this seemingly perfect group. Just from the outside, she realized Nolan and Caitlin are faking a relationship when he’s really into Ava and somehow, Dylan has been brought into it and has been doing both Ava and Nolan’s school work for them. However, Ali doesn’t yet know why. She gets even more confused when she can’t find any info on Taylor’s death, since the security system blocks any searching of her. (You’d think she’d go to a coffee shop off campus or google on her phone off the wi-fi.) It doesn’t help that she is also living in Taylor’s old house and finds that underneath the wallpaper, someone has written, “They’re watching.”

Luckily, the viewers know a little more about what Nolan has on everyone. He secretly hooked up with Dylan and is now using that as blackmail in order not to ruin Dylan’s current relationship. Nolan is dating Ava but because of her messy family life, he knows his mother would not approve so instead, he has a fake relationship with Caitlin, whose two mothers are very involved in politics. Caitlin, who is in a real relationship of her own, goes along with this because Dylan has photos of her mother with a man and threatened to release them and ruin her campaign. 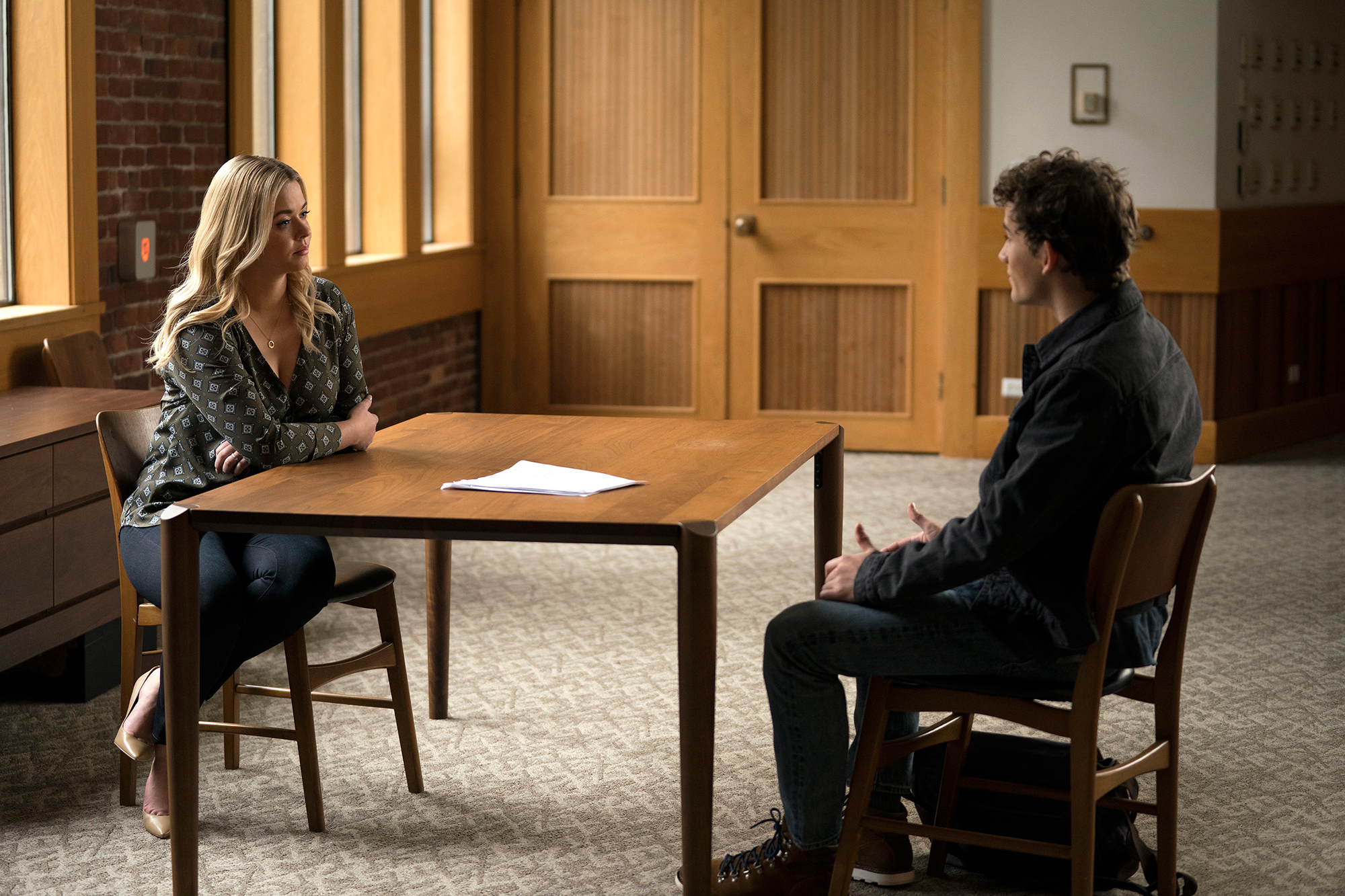 Nolan is also keeping another secret: His sister is actually alive and monitoring the school’s insane security system, which Claire seemingly is controlling, watching everyone’s every move. He actually cheats on Ava just to end their relationship, in order to protect her. (He tells her he was just using her for sex, when he clearly cares about her – very Sebastian and Annette-esque.)

The episode ends with a shocking death; Nolan stands on the school’s rooftop when someone in a dark jacket arrives. He thanks them for coming, apologizes for how he’s been acting and tells them Taylor is alive. Then that person pushes him off the roof and his body is impaled. The entire town sees it and Mona freaks out, asking in a mirror later that night, “Was this our fault?” It turns out she’s speaking to the security system – and she’s definitely involved in something messy as the last shot is a room monitoring the entire town on thousands of screens. Mona’s then told, “Go to your safe place.”

Creator I. Marlene King breaks down the pilot and previews what’s next.

Us Weekly: We have to start with that ending, that creepy room and how Mona is involved. What can you say?
I. Marlene King: Well I can’t say much but over the first 10 episodes, we will found out just how much she knows about that room. Mona’s backstory was that she went into game design. And that’s where Claire Hotchkiss found her, and realized she had such a great algorithm that she was using in her game design, that could help find the best and the brightest recruits to bring to Beacon Heights. 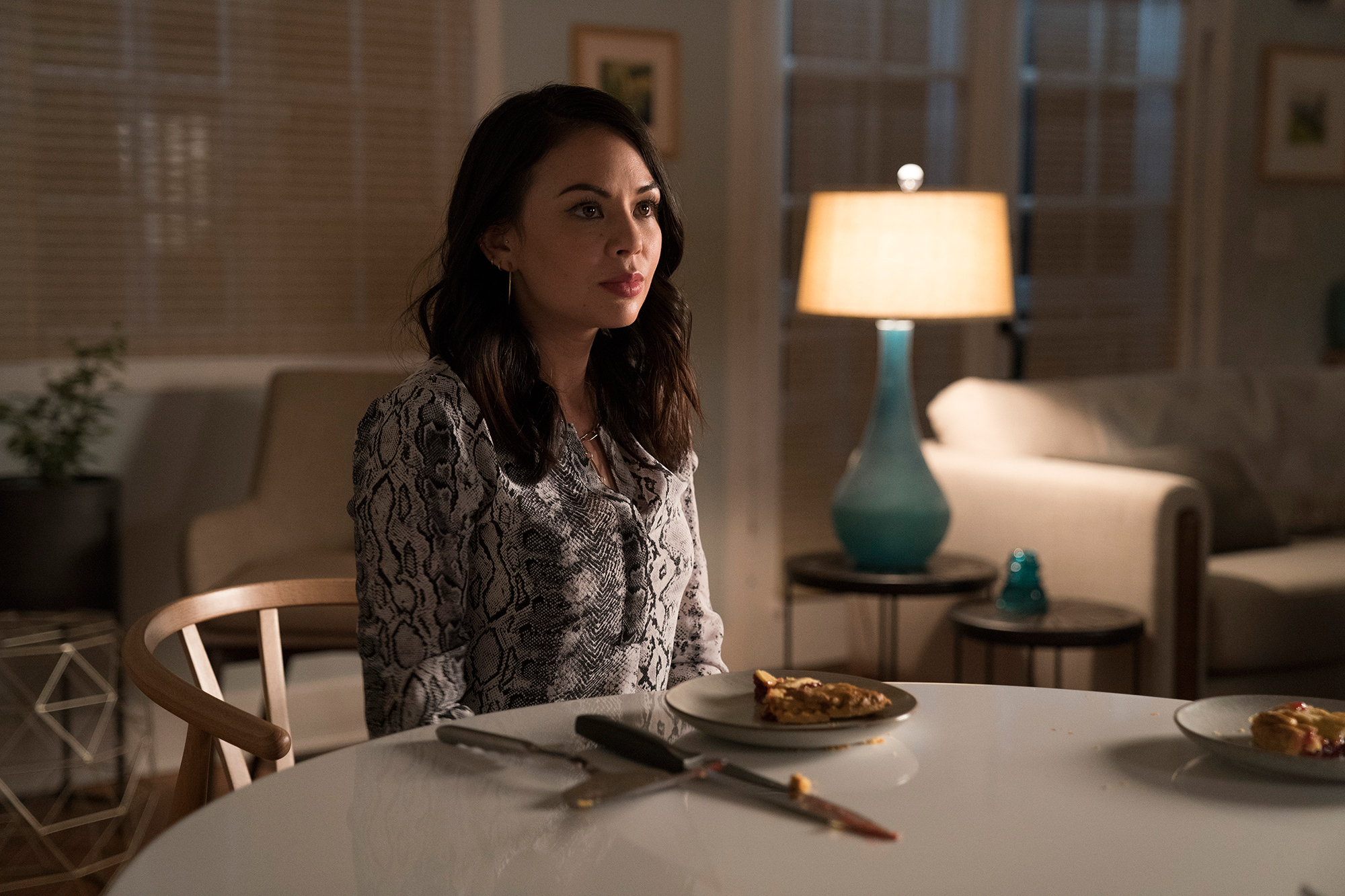 Us: Are you worried about Emison fans reacting to Alison leaving behind her family?
MK: We’re going to see Alison’s character evolves over the first 10 episodes and deal with the fact that she’s all the way across the country and Emily and her toodles are still back in Rosewood and I think we’ve been very true to that couple. Obviously they’re not physically together on the show. Sasha and I talked about how important it was to stay true to where we left them and where they’re going to go. Some fans won’t be happy with us but I think most will be.

Us: I loved how independent Mona was in PLL but now she’s a bit older. Will she have a love interest?
MK: We’re going to explore a really fun relationship with Mona. When we first meet her, she seems to be quite content, but once Alison finds out what she’s up to, that’s going to launch her quest for romance.

Us: Nolan is dead – we saw his body. How much more will Chris Mason be in the series? He literally has chemistry with everyone!
MK: Oh yeah, he’s dead! There’s no coming back from that. Chris won’t participate in every episode but I think he was in, like, seven out of ten. It’s not the last you’ve seen of Nolan even though he’s no longer currently living on this Earth.

Us: Was the person who killed Nolan the person he thought he was meeting?
MK: I can’t say but that question will be answered!

Us: At one point, Alison says she used to be like Nolan. Can you talk a bit about that and how Ali has changed?
MK: There’s a line in these first couple episodes, where she says to Mona, ‘Why do you think I faked my own death?’ And Mona says, ‘Because everyone in Beaton Heights wanted to kill you.’ She made a lot of enemies just like Nolan did, but yet she was also quite charming when she needed to be. Nolan’s very similar in that respect. Ali definitely wants to shed that “mean girl” person; she’s here to help the kids. But she gets some advice from Claire early on that helps her stay true to … I don’t want to say her inner mean girl, but her inner voice of being resilient. 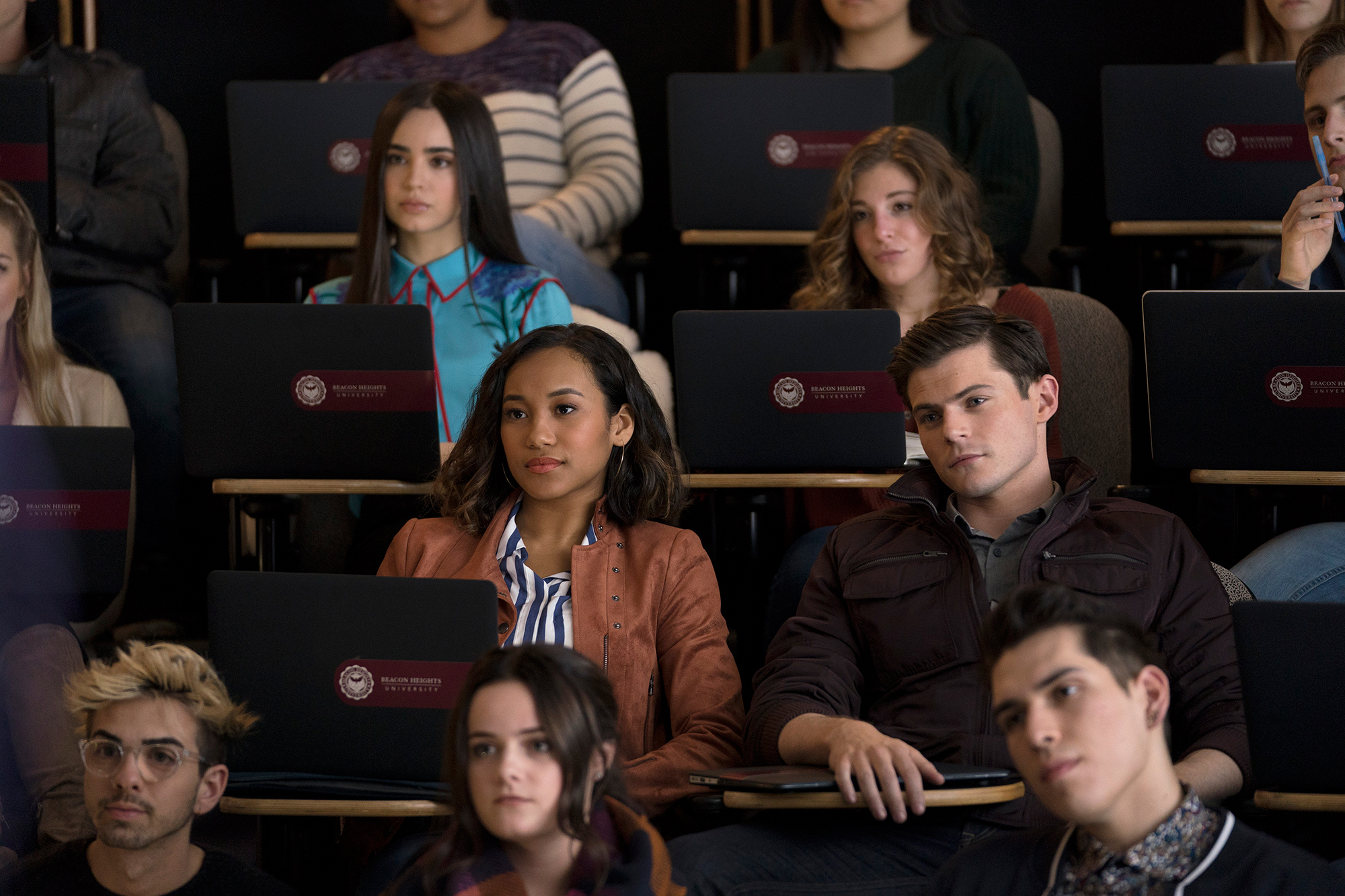 Us: When it comes to Ava’s secrets, we didn’t get too much of her backstory yet, just sprinkles of her broken home life.
MK: Ava has really developed this hard shell around her, because she has been abandoned by her family, and now she’s got to deal with Nolan’s cheating on her, then the loss of Nolan which is all very complicated. She brings a lot of depth to this world. Her character really is like an onion that we’re going to peel back the layers from, little, by little, by little until we really get to know her more. The same goes for. They’re all going to try to come to terms with why they were with Nolan, in spite of the fact that they knew he had this inner bad boy quality.

Us: And then there’s Claire Hotchkiss. I don’t think anyone could play that part like Kelly Rutherford does. Can you talk a bit about her pull on everyone and everything?
MK: She definitely likes to be in control, and we’ll find out why. It’s not just necessarily from sort of this villainous place. There is a true motivation to why she wants to control people in the way that she does, and it’s not necessarily negative. Also, Kelly is such a joy to have onset. When she showed up for the pilot, we were all fangirling. She really is just this very funny, lovely, kind human being. She brings so much to this show, because she really classes up the place.