Everyone repeat after me: "There is no drama between The Duke and Duchess of Sussex, Prince Harry and Meghan Markle, and the Duke and Duchess of Cambridge, Prince William and Kate Middleton." Actually, while I have you here, let’s also add: "And even if there is drama, it is none of our business." People have been concerned about reports saying Meghan and Harry are moving out of Kensington Palace, but they need not worry. The reported reason totally makes sense! Why are Meghan and Harry moving out of the Palace? It’s called space, people. Surely, you can appreciate that the growing family wants some room to spread out! Elite Daily reached out to Kensington Palace for comment on this new report, but did not hear back by the time of publication.

Here’s the gist: Right now, Harry and Meghan are shacked up at Nottingham Cottage next door to William and Kate within the Kensington Palace walls. While that’s all well and good, the home they’re living in reportedly just doesn’t have the square footage desired for the Duke and Duchess. So, they’re hopping over to Frogmore Cottage on the grounds of Windsor Estate, which is about 30 minutes away from Kensington Palace.

Queen Elizabeth’s former press spokesman Dickie Arbiter spoke with US Weekly about Meghan and Harry’s current accommodations and what they’re hoping for outside of the palace grounds.

"The reason [Harry and Meghan] are moving from Kensington Palace is the way they’re living at the moment is too small. There’s two bedrooms and a living room and a dining room downstairs. There’s no outside space and it’s just not big enough for a growing family," Arbiter explained.

While some city-dwellers might be rolling their eyes in their 600-square-foot apartments (*raises hand*), I still get it. It’s totally fair for Meghan and Harry to want a yard for their incoming wee-one to play in on warm London days. If I was a royal and had the option to move into a more spacious, um, *palace,* I would, too.

Arbiter continued, “Harry has decided that he wants to set up his own office, which is fair enough. While he was single, he was living in his comfort zone with his brother and his sister-in-law," adding, "But now he’s married, he’s creating his own comfort zone, with his wife, and it just makes sense. You can’t have a small staff running the offices of two people. Harry is now moving on and setting up his own office. Nothing unusual in that."

A home office?! What is this new place, a mansion?! 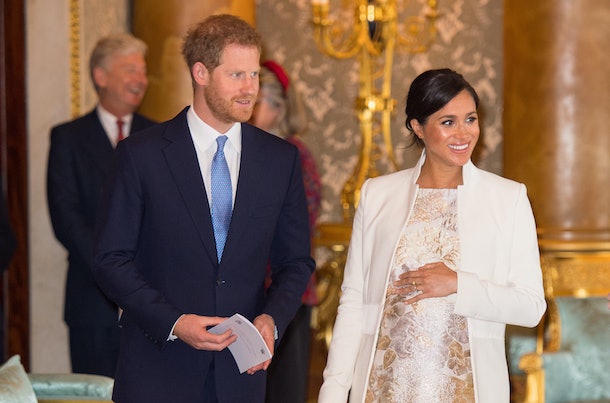 Arbiter says Harry’s desire for more space from his older brother is called evolution. Which checks out.

OK, fine. I’ll accept it. Sure, the press might tell you it’s way less juicy of a theory than extreme bad blood between royals, but fans should be pleased.

Alls well that ends with outdoor space and a home office. That’s what I always say.