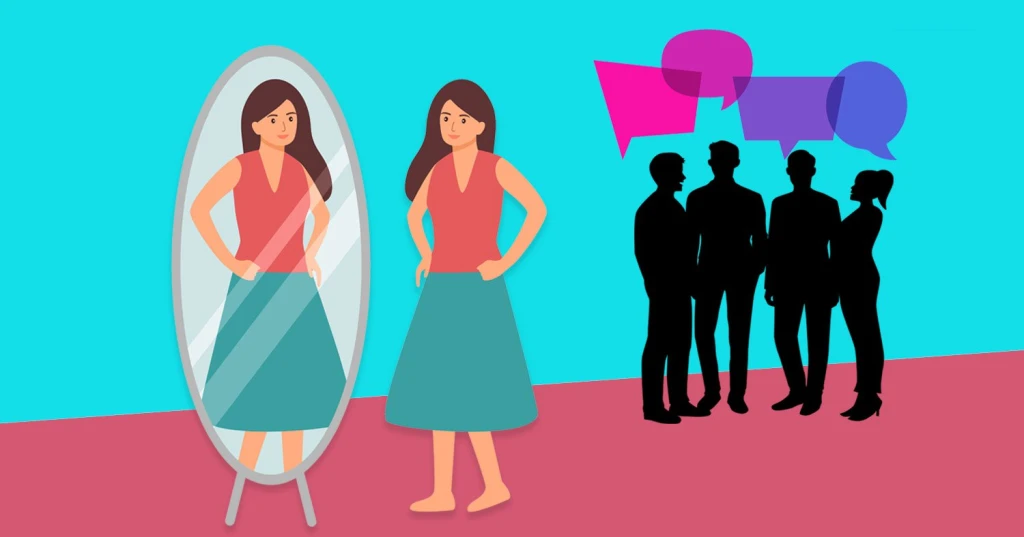 Type weight into Google, and you will see first-hand just how big of an obsession this truly is.

A simple click will soon bring you down a rabbit hole of a cultural mania, and you will struggle to find your way out.

Society is preoccupied with appearance, no more so than when it comes to those in the public eye.

Strictly Come Dancing contestant Tilly Ramsay found herself at the receiving end of unwelcome comments from radio host Steve Allen who called her a ‘chubby little thing’ live on air.

Tilly responded to the remarks on her Instagram, saying: ‘I won’t tolerate people that think it’s okay to publicly comment and scrutinise anyone’s weight or appearance.’

It has been reported that the radio presenter has privately apologised to the 19-year-old. Yet, we have to ask why he felt the need to make such a statement to begin with.

Why was her appearance a point of contention for him?

This type of reaction is seen often and repeatedly. When singer Adele first shared her weight loss in 2019, the response was potent.

‘I did it for myself and not anyone else. So why would I ever share it? I don’t find it fascinating. It’s my body,’ she said in a recent British Vogue interview.

If that is the case, then why were op-eds written in the aftermath?

And why is her appearance still a topic of discussion?

Psychologist Dr Kalanit Ben-Ari says the urge to comment on other people’s bodies is often a reflection of ourselves and our feelings.

‘Sometimes, people project how they are feeling about themselves onto others,’ she tells Metro.co.uk

‘It is a reflection of them and not the person they are commenting on. People might comment from behind a screen, allowing themselves to write direct and upsetting comments they would never say in person.

‘In addition to this, some people don’t understand the boundaries of what is acceptable to say and what is not, but any comment on someone’s appearance is unacceptable.

‘We do not have the right.’

The pressure of having a particular appearance is extreme for women.

Activist Lindsay McGlone, aka the Fierce Fat Feminist, says that while all facets of society obsess about weight, much of the commentary comes from men.

‘As a whole, society is very fixated on weight,’ she notes. ‘People of all genders feel entitled to comment on weight, but particularly cis men. They take it upon themselves to comment on women’s bodies, from a casual catcall in the street to full-blown harassment online.

‘Men are excused for their actions far more than any other gender and often get away with commenting on bodies without any consequences. There is one excuse after another when in reality, no one, no matter what gender, is entitled to comment on our bodies. It’s all a bit messy.’

Lindsay herself has experienced this type of ridicule.

‘I’ve personally experienced weight discrimination,’ she says. ‘Typically, it occurs when I refuse advances from men. It’s funny how they deem us attractive until we say no. The retorts include “look at the state of that”, “whale”, “pig” but the list goes on.’

Along with this stream of negative feedback, we are marketed bodily perfection on the daily.

Natasha Kingdon is an insight and innovation expert at the insights agency VERJ and says we have to be aware of capitalism and its powerful effect on how we view appearance.

‘Without a problem or an ideal to strive towards, how else can you make money off an insecurity?’ she explains. ‘Simply put, billions are made from selling the concept that can help you achieve the perfect body. It is ultimately too valuable to let you believe that your body shouldn’t be changed in its form today.

‘It is a sad indictment but one that is all too familiar. The obsession with weight has grown alongside the value of the industry. It perpetuates the idea that changing one’s body can be a tool to get there in a world where people want to buy happiness.

‘This money-making machine has fed off the insecurities seeded by adverts designed to make you question your body and happiness. We believe the adverts of products which promise if we just lose a few more pounds, we’d be happier.’

Because of the value we place on being ‘thin’, Natasha explains that many believe themselves to be part of a particular tribe and feel it’s okay to comment on another.

‘On a societal level, we have expectations of who can join our ‘tribe’ as such,’ she notes. ‘This is evolutionary psychology which goes back millennia, whereby if you fit in, you survive. Nowadays, when our lives aren’t necessarily tied to the approval of the other, unfortunately, such judgement remains.

‘People feel entitled to their opinion about others’ weight due to the societal overload of weight expectations and the associated moral value of being thin. This means people feel like they can say something when it’s outside the ‘norm’ because they feel safe in the knowledge that society will agree with them.’

Although depressing to consider, we all have joined in the negative discourse around weight at some point.

So how does one stop this urge and handle such a situation?

‘Surround yourself with people who empower you and have broader values than what a person looks like in appearance,’ Dr Ben Ari advises.

‘Grow your self worth and inner qualities with acceptance, respect and love for your body. Then you won’t feel a desire to comment carelessly.’

Natasha says to not give in to the marketing and coinciding narrative.

Instead, ask yourself some simple questions.

‘Consider why you feel compelled to pass comments? Is it going to add anything to anyone’s life? Why do you think thinness means success or moral worth?

‘Ultimately, stopping and asking these questions will make you understand that your reality or understanding of a topic is just a tiny version of a more significant and much more nuanced picture.

‘The road to a more inclusive and diverse society without harmful stereotypes, misleading social media feeds and disparities in coverage starts with each of us questioning, why are we so obsessed with this?

‘Wouldn’t the world be a better place if we were more obsessed with how decent a human is in character instead of how they look?’

Send us an email at [email protected]